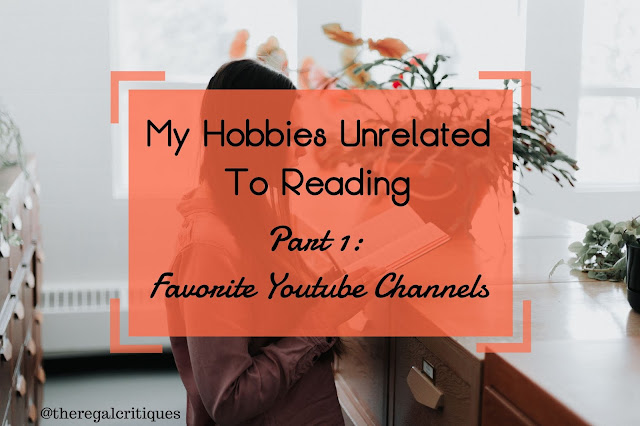 One of my favorite things to read on other blogs are non-book related posts. No matter if they are about personal thoughts, hobbies or work/study related stuff, there's something super-cool about seeing different sides of my favorite bloggers.

I figured you - even those who are here for the first time, in which case hello! - might want to see the same thing from me? I mean, I'm hella interesting and GREAT, so why on earth wouldn't you!?

As part 1 of this enlightening series, I brought to you some of my favorite youtube channels; including booktube, unsolved murders, humorous and even some beauty channels. Basically, everything your heart could desire. YOU ARE WELCOME.


Safiya is not one of those youtubers whose every video I watch, but I love her and her content nonetheless. She has such a great personality, and when she's reviewing products, she always aims to be honest - no matter the price of the product - and gives a detailed account of her experience.

I'll admit, I haven't been watching as much of Christine's videos as I used to, but I really, really love her content AND she is a truly funny youtuber, imo. Which surprised the heck out of me at first, because I don't necessarily associate a nail channel with hilariousness, but there you go, Christine is hilarious.


Murder With Friends
(on Pop Trigger)

I love this show so darn much! This series has a wholly different atmosphere from other such shows. Usually, the episodes are quite long, and so they are are divided into three different parts. Grace, the host, brings in a case or a murderer to discuss with her guest(s) who are chosen based on their knowledge and interest in said case. The atmosphere feels lighter than in similar shows, but that's what I love about this - it really does feel like friends discussing murders.

The link above leads to Season 1, and here's Season 2.

It was Shane Dawson who made me interested in unsolved cases first, even though if I remember correctly, he only did two videos about them. It was, however, Buzzfeed Unsolved that gave me more of these videos. Their content is truly well-researched, the quality of their vids is superb and the two hosts are FANTASTIC.

There are two versions of unsolved - Supernatural and True Crime. I highly prefer true crime, but supernatural also had quite a few intriguing cases.


Okay, so, first of all these are two channels, not one - the only reason I'm grouping them together is because they both create videos that are on the darker side: unsolved cases, serial killers, urban legends and all that jazz. Plus I discovered them at the same time, plus Rob and Cayleigh have worked together.

If you like the type of videos I've just described, I highly recommend checking their videos out - they have a fantastic way of story-telling and are 1000% respectful of the victims and their families. I'd say Rob Dyke's videos are more well-produced than Cayleigh's, but Cayleigh is

and the quality of their videos is spectacular. Moreover, I never got the feel that they are sensationalizing tragedies, on the contrary, they are both really respectful to the families and victims.


I used to watch Shane's videos around the time I started high school, but grew bored of them fairly fast, which seems to be the norm with youtubers and me. But then, approx. two years ago, I found out he was creating darker videos, as well - most of which were conspiracy theories. That sounded so different from the memories I had of him that I simply had to check it out, and wow, I was impressed.

At first I was only there for those videos, however, as he and his channel started to evolve, I found myself watching each and every vid he put out, and that hasn't changed. Today, I believe his content is one of the most original on youtube, and I love how he seem genuinely into everything he does for his videos.

Being from Hungary, I obviously can't watch this every evening - and wouldn't want to, to be honest lol - so the amount of Late Late Show I see is what they put on youtube. Out of all the late night show hosts I've seen so far, James Corden is the funniest to me, and he seems to create the most original and interesting content. Carpool Karaoke, Spill Your Guts Or Fill Your Guts or Crosswalk the Musical are some of my favorite things to watch, no matter who the celebrity guests are.

Y'all, MY FRIENDS, Ann and Clare, HAVE A BOOKTUBE CHANNEL!! When they first told me they'd be making one, I GOT SO EXCITED, and then these two horrible, horrible humans made me wait so long before they actually created it, even though they know I have no patience whatsoever.

Okay, so, I'll admit - the wait was 1000% worth it in this case, because I *adore* their channel to pieces. My favorite thing - besides the great recs - is seeing them interact with each other. For those who don't know - these two are sisters, and they have such a genuinely great 'team' feel to them. I love them, and cannot wait for more.

I've always preferred book blogs over booktube, and while I do watch the latter, it is RARE when I subscribe to someone and watch all their videos; Brandon is one of these youtubers. He has a fun, engaging personality, and he is also one of the few booktubers (that I know of) who shares a lot of mystery-thriller recs.

Like the booktubers mentioned above, Emma too has a great personality. The reason she stands out for me is that she's been creating more and more unique content, a lot of which I've not yet seen on booktube, such as the video I inserted here.

Anyone who knows me, knows that I'm obsessed with music, and have like, a hundred favorite artists at all times. It's always pained me that I don't know more about their creative process, the story behind their lyrics, their favorite songs from their albums etc. etc. etc. SO imagine how happy I was when I discovered Zach Sang, one of the best interviewers I've ever seen.

His content is great, because he 1) seems genuinely into the music of his guests, 2) creates a friendly atmosphere in his studio which seemingly makes his guests more open and comfortable, 3) asks questions that are actually about the music, and not about drama or gossip surrounding his guests. I AM IMPRESSED, BASICALLY.

Go ahead, and check out his whole channel, but I'll also leave here a couple of links to my favorite interviews of his: Shawn Mendes, Camila Cabello, Kesha.

Let's chat!
Do you watch any of these youtubers? Did my post make you interested in some of them? Who are your favorite YT channels to watch?