A Gothic Suspense That Doesn't Quite Hit the Mark: A Dangerous Duet by Karen Odden 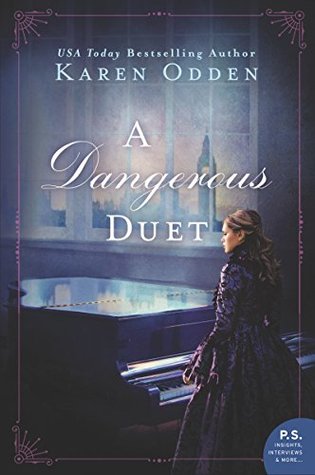 Nineteen-year-old Nell Hallam lives in a modest corner of Mayfair with her brother Matthew, an inspector at Scotland Yard. An exceptionally talented pianist, she aspires to attend the Royal Academy; but with tuition beyond their means, Nell sets out to earn the money herself—by playing piano in a popular Soho music hall. And the fact that she will have to disguise herself as a man and slip out at night to do it doesn’t deter her.

Spending evenings at the Octavian is like entering an alternate world, one of lively energy, fascinating performers, raucous patrons—and dark secrets. And when Nell stumbles upon the operations of an infamous crime ring working in the shadows of the music hall, she is drawn into a conspiracy that stretches the length of London. To further complicate matters, she has begun to fall for the hall owner's charismatic son, Jack, who has secrets of his own.

The more Nell becomes a part of the Octavian’s world, the more she risks the relationships with the people she loves. And when another performer is left for dead in an alley as a warning, she realizes her future could be in jeopardy in more ways than one.


Much thanks to the publisher who provided me with an ARC through Edelweiss!

I'm not sure what it was about A Dangerous Duet, but it had my attention from the first moment I laid my eyes upon the title on Edelweiss. Perhaps my fascination had to do with the way the quietness and simplicity of cover reminded me of soft piano music, while the word "dangerous" in the title promised an edge-of-your-seat Victorian mystery. Either way, I was hooked from the get go, and dove into this beauty with more than a little bit of excitement.

The premise, while simple and, to be fair, not the most unique, sounded like something Odden could put her own spin on. I was tremendously excited to meet our main character, get swept off my feet by the romance and lost in the mystery of the Octavian. Alas, I set myself up for disappointment. From the get go I felt like something essential was missing from every aspect of the novel - the writing, the characters and the plot all lacked the strength that could have elevated them to greatness from mediocre.

I struggle to form a coherent critique here, because I know this is supposed to be a quiet, slow-moving novel, so calling it 'boring' feels ignorant, but it is what it is. ¯\_(ツ)_/¯ Had this not been a review copy I very likely would have put it down, never to be picked up again. The biggest problem with A Dangerous Duet is its utter confusion of what it wants to be - is this a romance? a mystery? a character-driven novel? It dips its toes into multiple genres but ultimately fails to excel at any of them, thus, instead of being a beautiful mix of topics, it ends up feeling messy.

And the saddest thing is that there are so many bits and pieces hidden in there that would have been fantastic had they been written in more detail; the relationship between Nell and her brother, Jack's complicated feelings towards his father, multiple supporting characters who we barely scratch the surface of and the list goes on...

If I'm honest, it was the portrayal of mental health where Odden lost me. I doubt she meant to offend anyone, however, I did feel that her inclusion of mental health issues could have been done better. Knowing that her mother suffered from mental health issues Nell, and those that surround her, are very conscious of her moods. She has to restrict herself in multiple ways, including while playing the piano, as her doctor believes that becoming too passionate and emotional may make her mental state worse. Obviously, these tips and tricks were meant to be realistic for the era, not for ours, which is fair enough.

However, when a better part of the novel was spent in absolute fear that Nell might develop the same symptoms her mother's had, I expected more of a closure than what we were given. I wouldn't want to spoil anything for you, so let it be enough that instead of a nuanced description of mental health, Odden opted for the very easy way out that did nothing to destigmatize mental illnesses.

Passion for the Piano and Other Positives

Still, A Dangerous Duet has some merits, most notably Nell's love for the piano. In spite - or perhaps because - of not playing any musical instruments I'm immensely fascinated by musician characters. Besides enjoying learning about details I haven't yet known, I believe my liking for these stories stems from how much I adore reading about characters who have a passion. I'm a firm believer that we, all of us, have something we love to do, and oh my, what a delight it was to read about Nell's passion! Her work ethic and willingness to do anything to reach her dreams was incredibly admirable.

Overall, I have to say, A Dangerous Duet wasn't in any way awful - but it certainly could have been so much better. A little of this, a little of that only works if at least some of those "little" things are executed well - if everything is pretty much on the same level, a low one at that, it's impossible to be truly engrossed in a novel. And sadly, the choppy plot can very easily result in mediocre characters, which is what happened here. I can give A Dangerous Duet no more and no less than three stars, because while it was disappointing, it was also enjoyable and it had some unique elements.