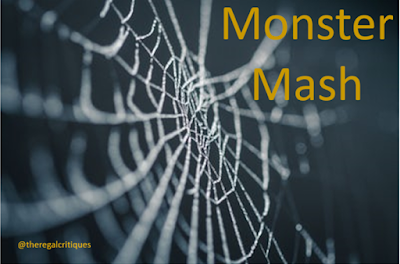 I've decided to pit some of the characters I read this year, against a random assortment of monsters and paranormal activity to see just how well they'd survive. Or just how well I think they'd survive because this is in no way scientific. That said I did use a very scientific number generator to choose each characters monster just to stop myself from playing favourites.


Izzy O'Neill from The Exact Opposite Of Okay vs Skeletons

Oh boy, Izzy would be entirely unbothered by this I reckon. This would take a massive comedy U-Turn. In my head she is currently using the skeleton as a xylophone. I feel like Izzy would be unbothered by most of these but this was easily the best she could've wound up with for pure comedy value. Oh she'd have so much fun.

Cassa, Alys, Evander and Newt from Beneath the Citadel vs Vampires

I've maybe given them an unfair advantage by allowing them all together because this seems way too easy now. Between all of them they have the perfect mix of knowledge, bravado and body bending skills to really evade and then fight back against a vampire. The vampires never stood a chance.

Mariko from Flame in the Mist vs A Demon

I really had to think about this one. Because firstly, I badly want to rig this in Mariko's favour. But secondly, she isn't bad in a fight. It's just that demons always seem so very unbeatable in horror movies. Maybe she could escape?

The Protagonist from My Lady's Choosing vs A Masked Murderer

Not technically a monster but I'm allowing it. Also, the protagonist is basically the reader and their choices. So... I guess I'm judging whether I would in fact survive. And the answer is definitely not. If I'm going off the choices I made when reading this book I'd probably try to make the murderer fall in love with me and then get instantly murdered. RIP me.

Mia and Jules from Unearthed vs Zombies

Oh they have so got this. Between her street smarts and his book smarts they'd have the whole zombie apocalypse resolved before it begins. I can't see anyway the zombies win this. Sorry zombies.

Liesl from Wintersong vs A Ghost

Oh Liesl. This is probably the only option she stood a chance with so she clearly has the number generator on her side. Much like my protagonist in My Lady's Choosing however there is every chance she'd just fall in love with the ghost. This also depends on who she has for backup, cause alone she'd maybe survive but with her whole family and friends by her side she has definitely got this.

I was so picturing this going much worse and I am very relieved that my favourite characters made it out alive. This was a very positive outcome if we ignore that the character whose decisions were all made by me would not stand a chance against any of these monsters.

What do you think of your favourite characters chances against any of these horror movie monsters?