{Royal Rantings} Do we judge female characters harsher than males? 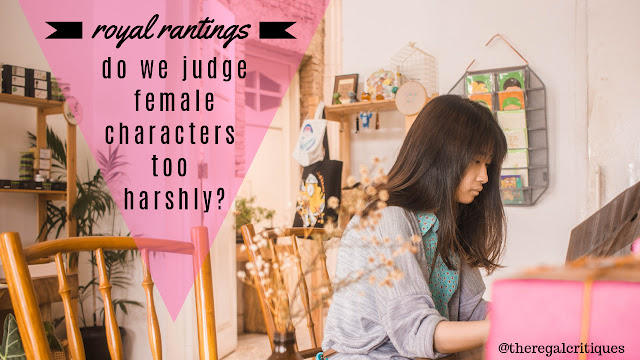 Take Wuthering Heights, which is one of the most outrageous and baffling example of this. Cathy, an unarguably spoiled and selfish brat, gets hated on a lot more than Heathcliff, who is verbally and physically abusive, controlling and manipulative, ready to destroy just about anyone for his “revenge”. It makes my stomach roil when the same readers who call Catchy horrible names actively romanticize Heathcliff.

I have so many thoughts on Wuthering Heights, which we're not going to get into today, because this post was not meant to be on in-depth analysis of classics. Instead, I'll be concentrating on fiction from more recent years, with special emphasis on fantasy, and anti-heroines.


I do believe that today, we are not only given fantastic female leads, but – in my experience – readers are generally more accepting of characters’ flaws, and appreciate when a female protagonist is complex and imperfect. Seeing badass, powerful, soft and all different kinds of women in main roles makes my heart burst with happiness. And the fact that novels – especially within the Young Adult age category – are becoming increasingly more diverse is honestly the best thing ever. We still have a long way to go, but there is progress.

On that note, here is a small shout out to some of my favorite, and all around incredible girls and women of the past 2 years.
Seriously, this is a very small portion - I have so many more, I could go on for days.
Also, they are not morally gray characters in any way!! You'll find recs like that a bit later. ;)

Nina and Inej / Zélie and Amari / Mina and Lynet / Amanda

At this part I feel the need to add a disclaimer – me talking about this topic is in no way a complaint against any author, or series. If you know me, or follow me on Goodreads, or just know a lot of about YA fantasy, you may guess which books prompted me to write this post. For those of you who will guess correctly - I found these novels great, and have massive respect for the authors for creating those two leading ladies! Another thing to note is that any book appearing in this post - not just in the rec section - is one I loved, and would recommend.

This year, I finally got to two series that’s heroines were marketed as cunning, cruel and even villainous. I was hyped, to say the least, because the thing is, I could name quite a few series with such male characters, but few, if any, with such females. Unfortunately, I felt a tad bit let down.

I was sad to see that the anti-heroines/female villains were not given an ending that I would call positive, nor did they have (m)any pleasant moments throughout the series. Now, these stories are 1000% valid and appreciated, and I fully believe they’re a great addition to the fantasy genre, and have outstanding heroines. Moreover, it is important to highlight that these two protagonists made their own decisions about what they wanted, which is fantastic, and I highly-highly-HIGHLY appreciate that.

But it was these series, and my disappointment over the lack of positive ending for these ladies, that made me wonder if I could recall any novel where a non-male protagonist with villain qualities ended up redeemed and survived. Or better yet – not redeemed but content with her life, whatever that means for her.

To tell you the truth, I still can’t think of a YA series like this. However, interestingly, there are quite a few where a male villain or anti-hero has been either redeemed (in a way that, you know, lets him stay alive) or simply accepted by others as he is. Take a look at the following examples:

Doran (Starflight) has ruthlessly bullied Solara, and treated her like a literal servant when she was forced to ask him for a job. He was, however, redeemed, and turned out to be an actually great guy, and I've seen nothing but love for him. Warner (Shatter Me) is the villain of the story at first, until he is redeemed to the point where he becomes a fan favorite. [I haven't actually read this yet, so thank you to Clare for helping me add him to this!]

Valek is an assassin who does not have to be redeemed to be accepted and loved. We learn new things about him as the book(s) progresses, all of which make him a complex, intriguing character, but I wouldn’t call that redemption. [On a side note, Yelena, the heroine, does morally gray things, however, as far as I remember, she always does so to save herself or someone else. In this case, I am very hesitant to call her an anti-heroine.]

Now, I'm not shading anyone who loves these characters - I grew to tentatively like Doran, am looking forward to reading about Warner, and I adore Valek. I showcased them because beloved heroes like these in YA begs the question: why don't we have more females like them?

Is it because readers tend to forgive male characters more easily? As my Wuthering Heights example showed, (and boy, I could tell you so many more like that!) people will excuse male characters in the same breath they condemn female ones for similar or smaller (!) flaws and mistakes.

Even truly despicable male characters are excused by readers rather easily – and again, this is no shade to anyone who likes these characters! Do they have some redeeming quality, or something that makes them attractive or the object of pity? In most cases, yes – Cardan (The Cruel Prince) doesn’t have it quite as easy as expected, Snape (Harry Potter) was fighting on the right side nearly all along, and I could go on. The Darkling, Voldemort, Dorian Gray... these are downright villains who still receive great treatment from many fans.

And listen, we can all love a great villain, and even look for excuses for them - it is in everyone's right which characters they support. My question is - why are there so many mainstream male villains and anti-heroes, who are getting appreciation? Obviously, female villains exist - but they are rarely (if ever) loved the same way, why is that?

I did some research for this topic, which involved looking up lists of anti-heroes and anti-heroines. I suppose you won't be surprised to hear that in every case, men were heavily dominating these lists. I wasn't. What did surprise me, though, was seeing anti-heroine lists, with the term being used correctly in the article (!), and still have characters like Jane Eyre appear on them. Isn't the bar too high for female characters when a classical heroine is called an anti-heroine for being (somewhat) unconventional for her time?


I decided next to closing this post with some anti-heroines, who I really loved to read about. Plus, seeing how there weren't that many in that category, I'm also leaving you some epic morally gray women. Enjoy!

Let's chat!
Do you agree/disagree with what me on this topic? I'm looking forward to discussing this with you! Would you like more anti-heroines and women as villains in fiction? Who are some of your favorite villainous women, or morally gray ones?