Movie Adaptations Better Than Their Books 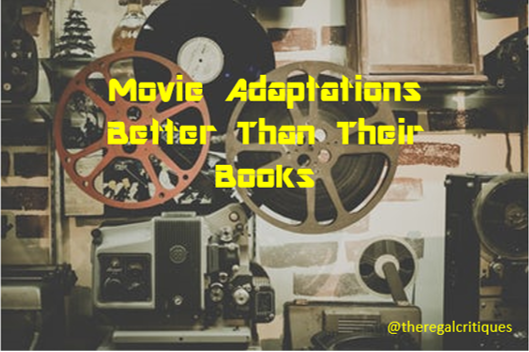 I'm so used to saying "the book was better" that this sounds wrong, but sometimes - the movie is just better than the book. It happens! And here are my favourite movies that are better than the original book!

Not that the book wasn't excellent. But I didn't connect with the characters as much as I did in the film. I also felt like the film was a little more hopeful and a little less dark which is different not better but it was what I most needed from the story.

A Long Way Down

Again, mostly because the characters were more likable in the film and because the film had a lighter tone than the book. The book did its best to capture the ridiculousness of the situation, but as someone with depression I found it kind of hard to read at times. The film did a perfect job (in my opinion) of capturing that weird sad, restless feeling I have and I will rewatch it eternally but have only read the book once.

I mean, this has a good argument for being the best film of all time. I will die on this hill. The book, whilst undeniably good, just doesn't have the same classic charm. Maybe because it doesn't have Cary Elwes (although in my head it obviously does). But god, this film is a work of art and I know literally every line.

Pride and Prejudice and Zombies

I'm gonna say it - I did not like the book at all. It felt super awkward and weirdly written. I can almost understand why it's well liked but - it just never clicked for me. I almost didn't watch the film but a combination of excellent casting and a very determined sister who wanted to see it convinced me - and I'm so glad it did. Because the movie has all the campy fun that the book didn't quite manage for me.

Can you think of any other book-to-movie adaptations that didn't just make good on the original - they went beyond that and became great? Or do you disagree with any of my picks?
Written by: Dual Reads date: 05:00