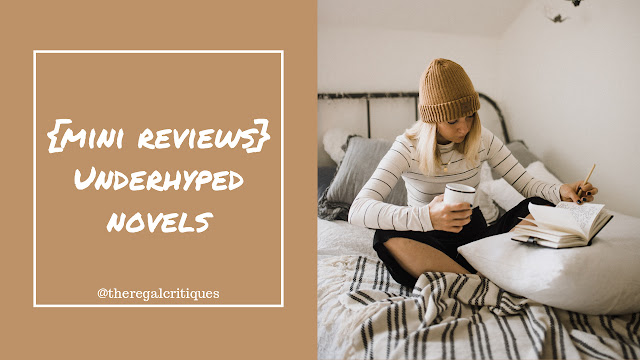 As a bookworm, it is one of the worst feelings in the world, I tell you, to love an author and their work so darn much... but not see much buzz around them.

I'm passionate about getting these titles out there, and so I'm incredibly pleased with today's Top Ten Tuesday (hosted by That Artsy Reader Girl) topic - hidden gems. To make this post more special, I opted for sharing 3 mini reviews, plus a bunch of novels I've already reviewed.

BLURB: After stabbing her ex-boyfriend's hand for mocking her mentally disabled little brother, Savvy was sent to a temporary detention center. Sounds rough, but it certainly has its perks, such as the two close friends she's found, or Cameron, the quiet boy who only ever seems to speak to Savvy. Despite the good, Savvy's life is far from perfect - in-between taking care of her little brother and school she also has to deal with her ex.. who's out for revenge.

▪ It has everything one could want in a contemporary novel - amazing writing, a lovely love interest, great friends and a fantastic heroine.

▪ The emotions will PUNCH YOU IN THE FACE, I tell you!! Seeing how how much Savvy adored her little brother, or how tentatively her relationship developed with Cameron... boy, I was TEARING UP.

▪ I cannot stress hard enough how fantastic the friendships were!! Savvy and her two friends were all dealing with their own shit, but were so so SO supportive of each other, and ah, their friendship just made me damned happy.

BLURB: Naledi has been getting emails about her betrothal to an African prince... and deleting them without a second thought, as she really has no time for such bullshit. Enter Prince Thabiso, freshly arrived to NY, determined to talk to his runaway bride... but when he gets mistaken for a 'normal' person, he jumps on the chance to get to know Ledi without sharing who he really is.

▪ Written by a black woman, A Princess in Theory has a majorly black cast.

▪ Naledi is a science major, and plans to work in the field of finding cures for diseases - she is smart, hard-working and fantastic friend and partner.

▪ The romance is so so SO well-handled - as you have seen in the blurb, Thabiso lies to Ledi about his identity, and that isn't brushed under the table later on. Especially as she already finds it hard to trust people, Ledi gets really, and I mean REALLY, mad when she finds out the truth.

▪ Ledi's relationship with her best friend Portia is complicated and messy, but still so full of love that I was rooting for them to work out their issues.

▪ On that note, book 2, A Duke by Default, follows Portia as she is working on creating a better life for herself, where she can be proud of who she is and love herself.

BLURB: Iris has never cared about her grandmother's fantasy series, so when she is forced to spend a week at the set of the movie adaptation she is mad. Most of the cast and crew is made up of massive fans, and she would rather not have anything to do with these people, thank you very much. But as the days go by, she has to reconsider what she thought she knew about fans of fantasy - these people are resourceful, talented and so very passionate about portraying the story on screen that she can't help but be pulled into their world.

▪  It's very feminist - the movie has a female director, as well as actors of color (one of them a pansexual young woman), and it discusses the challenges they have faced in the industry.

▪  Iris is one complex heroine - she's bitter for no reasons, spews the same words her father does and literally wants to ruin the movie, not caring about the lives of the cast. At the same time, she is a loving sister, even when she doesn't know how to treat her little brother, a passionate musician and someone who'll support you 10000% if she loves you.

▪  The romance was adorable, my god. The love interest is one of the loveliest ones everrr, and I loved the way their relationship progressed.

▪  It focuses on family - Iris has to deal with her issues concerning her father, while her little brother and her also have some things to work out.

Other Underrated Novels I Love:
*click on the covers for my review!*

Let's chat!
Have you read any of these novels? Because listen!! You 1000% should if you haven't yet. ;) What are some of your favorite underhyped novels?
Written by: Veronika @ Wordy and Whimsical date: 05:00