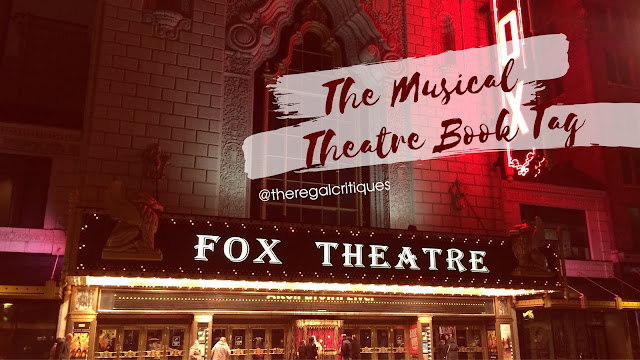 I've been feeling very down lately, and if there is one thing that never fails to perk me up its Musicals (also disaster movies but that's a whole different discussion). So I thought I'd combine my love of Musicals with my love of books and have a go at the Musical Theatre Book Tag which was created by SomethingLikeLydia!
Wicked: Favourite Fictional Friendship

Rose and Lissa in The Vampire Academy books it has to be! Friendships are my favourite things in books anyway and OMG there friendship is so strong and loving. I love the way they are around each other as well as the total support they give when separated. Sweeney Todd: Favourite Villain

The Darkling 1000%. He really is a villain. Like truly, truly bad and I adore him for it. I've seen people try and justify him a lot and turn him into an anti-hero but nope. He is a villain all the way and he is epic. Phantom of the Opera: Favourite Love Triangle

Ugh. I really am one of those people who hates love triangles. So I'm gonna go for Shatter Me. Because its less of a love triangle and more of a "boy doesn't know how to take rejection after girl moves on" thing and was really good at portraying how someone can be right for you at a certain stage in your life but not right for you long term. The Lion King: Favourite Sidekick

Primrose from Prudence by Gail Carriger. She is such a wholesome, innocent sidekick to Rue who is absolutely neither of those things. I think she is getting more of a focus in the next book of the series as well so I'm excited! Grease: Least Favourite Ending

Hmm... Most recent one would have to be The Young Elites as a series. The final book let me down in a lot of ways especially its ending. My least favourite thing is an ending that is thrown together for drama but isn't really fitting with the rest of the story. Another one would be the Divergent trilogy cause what the hell was even up with that? Matilda: Favourite Adaptation of a Book

I so thought I was gonna go Hunger Games for this. But I love A Long Way Down the movie way more than I loved the book and the same goes for The Silver Linings Playbook. It's so rare when the movie works better than the book that these two deserve a mention. Les Miserables: Favourite Death in a Book

Well this is just such a spoiler of a question isn't it. OK so I hate character deaths cause I cry every damn time. But for sheer impact it would have to be Hedwig in Deathly Hallows. I mean I'm mad that she died obviously but she was such a turning point for me in that book and in my reading in general where I suddenly realised "shit nobody's safe". I can't remember being as shocked by any other fictional death as I was by hers. (Side note: my favourite death in Les Mis is Enjolras because he is my joint fave with Eponine and he dies so freaking flamboyantly. I can only aspire to that level of drama.) I'm not going to tag anyone but if you feel like doing this tag please leave me a link so I can check out your answers!
Written by: Dual Reads date: 05:00