MINI REVIEWS: Horribly Hyped Books I Did Not Like #UnpopularOpinions 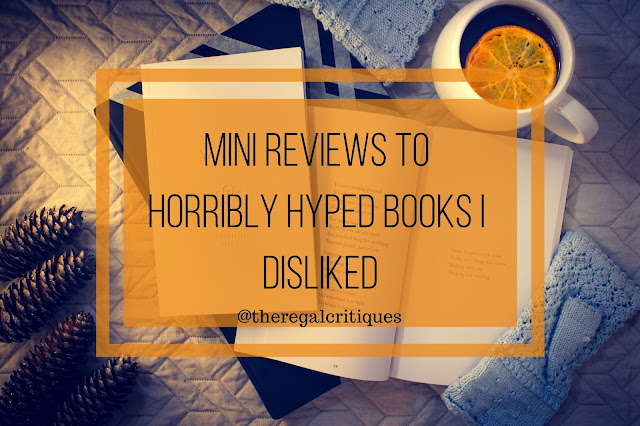 The hype, as we call it in the book-blogging community, is a scary thing. Yes, it can help you find your new favorite - perhaps, pushing a book at you that you would never have read otherwise. But it can also push books at you that you'll detest. And the worst? You'll be suffocating in the hype afterwards, being one of the few who did not care for said book. *shudders*

The latter is what happened to me in the case of the following books, and it's noooot a pleasant feeling, so if you agree with me? FEEL FREE TO RANT IN THE COMMENTS, I like rants.

To be fair, this one hit me harder than a usual disappointing read, so if I sound bitter in the next few mins? SORRY. I massively enjoyed the author's more recent release, 180 Seconds, and fully expected to love this, as well. Unfortunately... I did not, and here is why:

💔 Julie was an atrocious person. YES, I love unlikable heroines, LOVE THEM, but this girl, damn, this girl was horrid. She was a judgmental, condescending, know-it-all piece of shit, who, for whatever reason, believed herself to be this exceptionally intelligent, witty and fantastic person. She had a complete disregard for her mother - who never did anything to wrong her - and well, see this quote for yourself:

I was so fed up at this point, whyyy did I keep reading??


💔 I was massively horrified by the way Celeste's issue was handled. I'm not going to go into the representation of her mental health, because I am not an expert, but... the rep did feel shady. Especially considering that Julie, SOMEONE WHO "LOVED" CELESTE, constantly was referring to her (in her mind) as a "n*t job" and the likes. WHAT THE FUCK KIND OF MESSAGE DOES THIS SEND TO PEOPLE STRUGGLING WITH MENTAL HEALTH ISSUES!?

Moreover, Julie had this idea that Celeste has to change herself to be accepted - she made Celeste listen to the top songs, convinced her to change her appearance and even kept berating her for the way she talked, because it was "too formal" according to Julie. Well, Julie, you know what? Fuck you. When you have a young person who LOOKS UP TO YOU, you should NEVER send them the message that they need to change themselves to fit in. NEVER.

💔 Other Cringe-Worthy Elements: stilted writing, the "funny" facebook updates, the romantic relationship(s), Julie trying to 'diagnose' Celeste with a mental illness AFTER TAKING A SEMESTER OF PSYCHOLOGY.

❤ The Good: The mother takes prescription for her depression, so at least, there was some resemblance to therapy/treatment positivity. Yay!

When I picked this up, I was going through a period in which I was desperate to find an edge-of-your seat, dark thriller. The results were... mixed, to say the least, and 13 Minutes wasn't one of the better ones.

💔 Fair warning: I think I went into this too hopeful, which made the experience ultimately worse than it would have been otherwise.

💔 With that being said, this was far from great, actually, it was quite boring and commonplace, there was not one truly original idea to be found.

💔 The characters were plain, uninteresting and annoying. I adore unlikable characters, but when they are unlikable and are acting dumb as fuck? Ahaha, go, get tf out.

💔 And wow, the twists were painfully easy to guess!! The biggest twist at the end could be seen from nearly the beginning, which ruined the whole book basically.

💔 No other comments - this was just... ordinary, I cannot even complain properly about it smh.

❤ BUT!! the book did keep me intrigued - at least enough to keep reading. Plus, it was kinda fun to wait for these assholes to crash and burn, which was obviously going to happen.

Have you read these novels? Did you like them? What hyped novels have you read lately that you absolutely could not stand?