New YA Releases That Have Us Bewitched 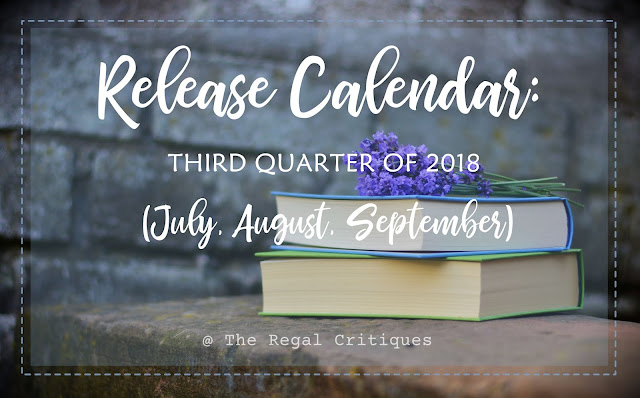 Well, hello there. Look at us marching into the second half of 2018 already! I won't mourn on this rapid passing of time but...can you believe we're closer to 2019 than we are to 2017? Wild. As is the norm, though, we are here to distract you with all the books we'll be blessed with this quarter of the year so without further ado- here are the YA releases of July, August and September we're the most stoked for!

The blurb of If Only started off with distinct Love, Rosie vibes but soon escalated into something more. It looks like it will be an emotionally-charged journey of discovery and I'm intrigued! While I don't really have high hopes on The Girl You Thought I Was (the romance angle is said to be redundant) I still think the MC promises to be unconventional and I'm here for it. I was lucky enough to win an ARC of How We Learned to Lie through a twitter giveaway and I'm stoked for it because it sounds like something I'd looove. Complicated friendships and mysterious happenings? Yes, please! Lovely, Dark and Deep gives me distinct Everything, Everything vibes but I'm hoping this one works for me better! I haven't read anything by Justina Chen before but this one sounds so promising, especially since it has a biracial, photosensitive protagonist.

July is a good but frustrating reading month for me! So many books I'm desperate for are coming out but I'm on a book buying ban so I don't go broke before my trip to London at the end of the month. So I have to stare longingly at these books until at least August. Hullmetal Girls is one of those books where you're so excited but actually have no idea what it's about? This is purely based off my love of the author's twitter. Is that bad? Scream All Night was initially cover-lust and has grown because it sounds like such a great book for horror movie fans (of which I am one). Contagion is just further feeding my Sci-Fi/Horror needs - this genuinely sounds so Alien-esque and I am here for it. And my most anticipated of the month is The Darkest Legacy because I have missed Alexandra Bracken and this world. And the characters so very much.

I read Final Girls last year, and really-really adored it - at this point, all thrillers seem super-similar, but that one stood out for me, so I have huge hopes for The Last Time I Lied. Uprooted is one of my all time favorite novels - I was mesmerized by the world-building and the characters, and I'm hoping Spinning Silver will have a similar effect on me. Ever since reading To Kill a Kingdom, I've been in the mood for another mermaid/siren novel, and I think the Sea Witch is going to be perfect for me. The Cheerleaders will be my first book by Kara Thomas, but I do know that her works are quite well-praised, and I'm super-excited to see it for myself.

So August 7th is apparently a big day for me. I literally didn't realise that until I chose these four. Wow. Catwoman Soulstealer is the third book in the DC series (and no I haven't read book 2 yet) but I love Catwoman as a character. I think DC do villains and female characters so much better than Marvel and Catwoman is an intriguing person. These Rebel Waves is pirates and rebellion so obviously I'm fully on board with it. Dance of Thieves also ticks so many of my boxes since its thieves and spies and a cat and mouse game. And again my most anticipated is a sequel - Neverwake! Dreamfall was a surprise favourite for me last year and I've been impatiently waiting for Neverwake ever since I put it down!

I absolutely adore Tessa Dare's novels, and as The Duchess Deal was especially delightful, I have huge hopes for The Governess Game. (On a side note: finally, historical romance series with good covers.) Darius the Great Is Not Okay sounds so darn good, so it breaks my heart that it's gone a bit under the radar so far. LET'S CHANGE THAT. I've read in various reviews that Heretics Anonymous is quite humorous, and I'm so here for that! Umm, a YA horror about a possession? HELL YEAH, I need The Dark Beneath the Ice like right now.

I've loved everything I've read by Holly Bourne so far, especially since she tackles mental health issues really well, so I'm super excited for Are We All Lemmings and Snowflakes! Our Stories, Our Voices promises to be an anthology of brilliant essays by some of YA's most brilliant authors so how could I possibly not be excited for it? I'm always up for mystery and drama, and We Regret to Inform You promises just that with generous helpings of romance too. Excited! I'm not normally a fantasy/sci-fi kinda person, but being feminist, Moroccan-inspired and #ownvoices, Mirage by Somaiya Daud sounds too freaking good to pass!

The whole blurb of Not Even Bones sounds SPECTACULAR, but this part in particular has me all *heart eyes*: "Nita did a good deed, and it cost her everything. Now she’s going to do a lot of bad deeds to get it all back." You guys, I'll always be ready for more Audrey and Thomas - one of my OTPs, y'all - so, obviously, I'm hella excited for Escaping from Houdini. The Dark Descent of Elizabeth Frankenstein sounds deliciously dark, with a heroine who is "determined to stay alive no matter the cost". I've only read one book by Nova Ren Suma, but I'm already a fan of her complex and quite twisty storytelling - bonus that A Room Away From the Wolves cover is purple, aka my favorite color.

I'm very well aware that I still have the unread copy of Starfish lying around, but I know I'd love it when I do get around to it so I'm not lying when I say I'm excited for Summer Bird Blue! Pride sounds so, so promising and I'm totally here for this retelling of Pride and Prejudice because it's said to deliver the essence of the original while also diversifying it lots! Analee in Real Life is touted to be a journey of grief, mourning and acceptance and I'm really interested in seeing how the author deals with these themes. Yes, I'm yet to read Warcross and yes- I'm still so excited for Wildcard!

I know nothing about And the Ocean Was Our Sky except that Patrick Ness wrote it and that is, frankly, enough for me. I adore his books so very much, and they're all so different from each other that going in with any sort of expectations never works for me! Ignite the Stars again I know little about (such a theme) and I want it because the girl on the cover gives me serious Mass Effect vibes. Which no, should not be a reason to buy a book, but yes absolutely will be. For a Muse of Fire is one of my most anticipated of the year because gorgeous cover + great writer + badass plot just = amazing read. And The Dark Descent of Elizabeth Frankenstein is probably my most anticipated for the rest of the year just overall - Kiersten White is one of my favourite writers and a Frankenstein retelling can only be a good thing - especially if there is a "dark descent"

So, these are the most promising of YA releases for this quarter of the year, as per our opinion. Which of these are you the most excited for? Have you perhaps read any of these already? Are there any other releases you think we should have included in our list? Let's talk in the comments below!
Written by: Unknown date: 05:00