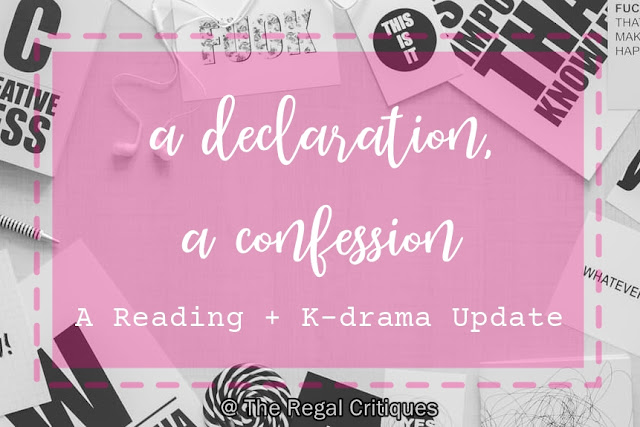 I hereby declare I'm out of my reading slump.

I've been in various slumps on and off for the past year and reading has been the most worrying of it all, so colour me extremely excited to find myself capable of picking up a book and staying invested in it for two hour straight.

However, in a worrying turn of events, I've come to realize that slump or not, I'm unable to actually read unless I know for a fact that I can read at leisure, that I'm in the right head-space for reading, that I'm not flooded with things to be done immediately, and therefore, I don't actually pick up a book unless I see myself spending at least 30 mins on it at a stretch.

Uni has been tiring, to say the least, and the coming months only prove to be more hectic with deadlines looming up and it's Ramadan which means I have less time for myself AND I'm constantly tired. Stress + Me is definitely not the recipe for reading. Add physical books and ARCs to the equation and reading is pretty much out of the question because I don't read physical books at night (and I'm not into e-books at the moment), and review copies mean I need to be doubly conscious about how I feel about anything related to the book, so yeah. ISSA DILEMMA.

I still am very much capable of feeling excited about books, hoarding them, picking them up and fondly stroking them but I really am not reading as much as I should.

What I do find myself capable of doing, though, is watching K-dramas, and hence why you're blessed with this post today. I have given up on watching dramas that have been already aired completely for the time being because I can't help but binge them and that doesn't go too well with my sleeping schedule. Therefore, being the genius I am, I started on a few currently airing ones so I can't devour them all at once even if I want to. Clever, huh? Well, not really since I ended up way too much on my plate but I'm taking it slowly and absolutely adoring it all.

Today I'll be sharing with you the k-dramas I'm currently watching and loving with the hopes of maaaaybe dragging a couple of y'all down the k-drama hole too. JUST KIDDING. I'm just sharing what I love, okay? No ulterior motives whatsoever. Nuh-uh. Without further ado, here are five of the most promising K-dramas that are currently airing!

- Official remake of the US television series "Suits".
- Pretty much the same storyline + set of characters as the original but has a distinct Korean flavour to it (obviously).
- Stars Park Hyung-Sik, whom I absolutely adored in Strong Woman Do Bong Soon (watch it!) and a whole lot of other brilliant actors
- Just the right amount of fun and serious.
- Romance takes the backseat but is still super cute, and plenty of work and other relationships that are heartwarming.
- Watch out for the bromance!
- 12+ episodes aired already, so if you'd rather watch it after it's completely aired you can do so in just a couple of weeks!

- Had my doubts about this one primarily because of the main lead but he's superb, and the chemistry is on point!
- Stars the fantastic Lee Sung-Kyung from Weightlifting Fairy which I loved.
- Basically a romance with fantasy incorporated into it- the female lead has the unique ability to see the lifespan clocks of other people, and along comes the male lead who can stop her countdown.
- Extremely real characters, so much emotion and just enough drama to keep you hooked.
- 6 episodes aired, so you won't have much to catch up with should you jump on the wagon ASAP!

- I wasn't at all sure about trying this because it seemed like entirely too much action and anything but, but I finally caved because it's Lee Joon-Gi after all, and I abso-freaking-lutely loved him in Scarlet Heart: Ryeo, and he was cool in Criminal Minds, the Korean version too, and am I glad I did!
- The male lead, played by Joon-Gi, is an attorney who's highly skilled at finding and using any loopholes in the law to achieve his means. His sole motive is avenging his dead mother.
- Lots of interesting characters, kickass female lead (also a lawyer) and a highly entertaining gang of thugs who provide comic relief.
- Has a predominantly dark atmosphere, but this is beautifully balanced with family sentiments, romance and like I mentioned before, the antics of the gang.
- I've watched only 3 episodes (out of the 8 already aired) but they've been increasingly more engaging so I have high hopes for this one!

- Based on the novel Ms. Hammurabi (which I have absolutely no idea about, lol)
- A courthouse drama centering two judges- one that strictly follows the rule book and another that rebels against what's considered the norm.
- I wasn't entirely too impressed with Go Ara in Black but she's proving to be really good here! Her characterization certainly helps- she's brilliant with her comic sense and spunk.
- The male lead is amazing too, and I'm loving Lee Elijah who's in a role entirely different from what she played in Fight My Way, which is where I saw her first.
- I watched just the 1st episode so far (6 aired already!) but it had me hooked because of just how well-balanced it was. It hinted a lot about the main leads' backstories and I'm definitely intrigued!

- Based on the webtoon of the same name, this is about a narcissistic vice-president of a company whose secretary of nine years suddenly announces that she'll quit working with him.
- The synopsis doesn't give away much (and I didn't want to spoil things for myself so I didn't hunt down more details about the webcomic either) but the promo teasers have been extremely promising~
- The chemistry between the main leads seems fantastic already and I'm so here for it! Also hoping this would be as hilarious as the promos hinted it would be.
- Stars Lee Tae-Hwan who I loved in W: Two Worlds, but sadly had quite less screen time. Hope he gets the kind of attention he deserves this time around!
- This just premiered yesterday, so I haven't gotten around to it as yet but the male lead is Park Seo-Joon who's pretty much my mostest favourite K-actor at this point so unless it's the worst drama in the history of K-dramas there's no way I'd not like it.
- UPDATE: Just watched the first episode and it's pretty perfect- the main leads are terrific (I fell in love with Seo-Joon all over again!) and the side characters introduced so far are promising. Loved how they cut straight to the chase; a simple yet unpredictable storyline with lots of LOL moments. I feel this and About Time would perfectly balance out the other three dramas I'm watching which are relatively more serious!

Well, that's it! These are my picks out of the many, many promising Korean dramas currently airing and I have to say I'm extremely pleased with them all so far.

Have you watched any of these? Are there any new K-dramas I simply must add to my list? Do you watch k-dramas at all? If so, why yes/no? Let's talk in the comments below!

Also, hey- stalk me on Trakt to see what I've been watching lately!
Written by: Ruzaika @ Wordy & Whimsical date: 05:30