All the Action and Dinosaurs for the Adrenaline Junkie in You in Exile (The Extinction Trials #2) by S.M. Wilson 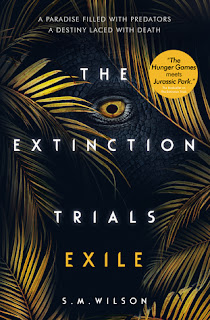 After surviving on Piloria once, Storm and Lincoln are the obvious candidates to return to the dinosaur continent to test the new virus that should clear the way for human settlement. But they have their own priorities – finding a cure for the plague that’s sweeping Earthasia, and keeping themselves alive.

Exile, the sequel to Extinction Trials, follows Stormchaser and Lincoln as they're faced with newer challenges and hurdles in pursuit of their individual goals. While the first book left things on uncertain terms between the characters, the second book takes off with us seeing how each character is faring with the aftermath of their stay (and subsequent victory) in Piloria, the continent of dinosaurs. Does the book do justice to what the first book lead up to? Do we see more in terms of character growth in each lead? Do we have enough dinosaurs and action in this latest installment of the Extinction Trials? Does the romance amount to anything?


Well, this time, the stakes are higher- the characters stand to lose more here than they did in the first book and that itself made this one all the more thrilling. We see the struggle both Stormchaser and Lincoln go through while adapting to life after their stay in Piloria. Lincoln is focused more than ever on curing his sister Arta of the blistering plague, and Storm finds herself drawn to Arta despite herself. Things are not looking good for those who succumbed to the plague but the lack of any cure was starting to seem more and more like a ploy by the government to help control the population and hence ensure more rations to go around. When things turn out that Stormchaser and Lincoln are to return to Piloria, both are looking forward to it in spite of the horrors it reawakens in them. Lincoln, because nothing would deter him from finding a cure for the plague, and Storm, because...circumstances. Circumstances which ensure that Piloria is the safer choice for her, for the time being at least.

What I loved most about Exile was how the author built on what she'd already conjured up of the world for us. While the world-building was exceptional in book one, I still didn't feel entirely comfortable in it, if you know what I mean? But here the author herself seems at ease in the world as she explores more into it, thus ensuring that we see more about the world we've grown to love in all the right ways. I loved that we got to see more into the workings of the parliament and Earthasia in general, but this is nothing compared to the feeling of being back in Piloria- I loved it all, swamps, forests, dinosaurs and all. While we don't get a a huge amount of action with the dinosaurs, what we do get is so thrilling and gory that you couldn't possibly be wanting for more!

We are introduced to a few interesting new characters and get reacquainted with the older ones, one of which was so out of the blue that I'm still not quite over the shock of it. While Jesa ended up being a favorite (she did so resemble Storm in all the best ways!), the one character that surprised me tremendously was Reban Don. I loved how he kept us second-guessing his intentions and proved himself throughout the course of the story. Speaking of which, the familial relationships were done really well- apart from Arta and Lincoln, I loved seeing how Storm's relationship with her dad, Reban, progressed, and the same could be said about Jesa and Blaine. I am, however, not on board with a certain death involving an axe because it felt like the character was too easily done away with after he served his purpose, and I felt it was unrealistic that the main characters dealt with all things Piloria threw at them a tad too easily, but in no way did this make me enjoy the story any lesser.

One of my main complaints regarding the first book was that the romance felt unnecessary, but this time around I felt the romantic relationships were dealt with satisfactorily- primarily because they weren't given importance over the more crucial story at hand. I'm more interested in seeing how things progress in the sequel now, and I'd be happy to cheer them on, dinosaurs at their heels and all. I'm also looking forward to seeing how the other relationships progress, particularly those of Storm with Octavius, Dell and of course, Milo! I was quite bummed that we didn't see the pleiosaurus in this book and I hope the author has a satisfactory reason as to why he just - BAM - disappeared.

All in all, I'd say Exile was a more than satisfactory addition to the thrilling Extinction Trials series. While I did feel things were rushed, especially towards the end, the cliffhanger has me on my toes- I can't wait to see what the future holds for this brilliant set of characters, and I sure hope we have more of dinosaurs and Piloria in the next book!