The Adventures of John Blake: 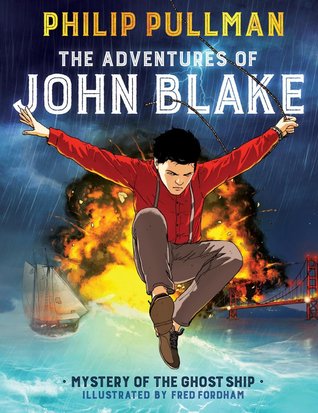 Synopsis:
Trapped in the mists of time by a terrible research experiment gone wrong, John Blake and his mysterious ship are doomed to sail between the centuries, searching for a way home. In the ocean of the modern day, John rescues a shipwrecked young girl his own age, Serena, and promises to help. But returning Serena to her own time means traveling to the one place where the ship is in most danger of destruction. The all-powerful Dahlberg Corporation has an ambitious leader with plans far greater and more terrible than anyone has realized, and he is hot on their trail. For only John, Serena, and the crew know Dahlberg's true intentions, and only they have the power to stop him from bending the world to his will...

This was a must read for me purely because it's Philip Pullman. I've only read one graphic novel before (Nimona by Noelle Stevenson) and whilst I loved it, it's proven a hard medium for me to get into.
The art style in this was completely my style. It was very clear and beautiful but also simple and I think it suited the characters and the story extremely well. I especially loved the use of colours which made the book feel like the sort of thing child-Clare would have been crazy about (meaning fun and easy).
The story was less my thing but still a lot of fun to read. I'm never a big fan of time travel (I just can't wrap my tiny brain around it ever). And the concept of a ship full of people from various time periods all trying to get to various other time periods and passing through our time on their way to go maybe backwards or forwards - I just got lost as you can probably tell from that very confusing explanation. To be fair I don't think this was the fault of the book and I kinda loved that one of the main characters was about as confused as I was.
This isn't my favourite Philip Pullman story but I did enjoy it and would definitely recommend it if you've got any reluctant middle-grade readers. I will be passing it on to my younger brother who rarely reads because it seems like something he would enjoy anyway. 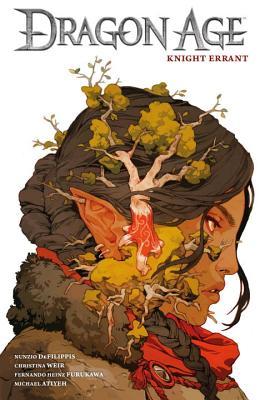 Synopsis:
Vaea, an elven squire, and her knight, the drunken Ser Aaron Hawthorne, arrive in Kirkwall just in time for Varric Tethras' appointment as Viscount. A talented thief, Vaea skips the party to take on an easy job recovering a hidden lock box . . . but when she chooses to change the terms of the deal mid-heist, she is entangled in a dangerous mission that is surely above her pay grade.

So the obvious first thing to address here is - will this story be of any interest to people who have never played any of the Dragon Age games. And the answer is a little of both (sorry that's not helpful). The story itself follows a new main character and a new plot. And the fantasy world and action are intriguing enough to draw anyone in. However I'm not sure the story did a good enough job with the lore for unfamiliar readers to fully immerse themselves in the story.
In addition to this there are many cameos from favourite (and less favourite) characters who receive little to no introduction. Knight Errant very much works on the assumption that you've played the game and that's why you're reading the story. Which is great for fans - not so great for anyone who picks up this book for the gorgeous artwork.
That said, if you are a fan then I highly recommend this. The art is so, so beautiful; the cameos are variously funny and intriguing; the story is canon and its going to be a while till the next game so... anything to tide me over?

Both of these novels have reminded me of why I want to get into graphic novels (pretty pretty art) so if you have any recommendations for me please do let me know what are some of your favourites!!
Written by: Dual Reads date: 05:00