Love, Hate and Other Deceptive Filters in This Debut by Samira Ahmed 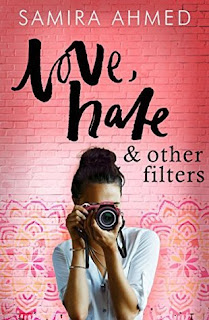 A searing #OwnVoices coming-of-age debut in which an Indian-American Muslim teen confronts Islamophobia and a reality she can neither explain nor escape--perfect for fans of Angie Thomas, Jacquelyn Woodson, and Adam Silvera.

Maya Aziz is torn between futures: the one her parents expect for their good Indian daughter (i.e.; staying nearby in Chicago and being matched with a "suitable" Muslim boy), and the one where she goes to film school in New York City--and maybe, just maybe, kisses a guy she's only known from afar. There's the also the fun stuff, like laughing with her best friend Violet, making on-the-spot documentaries, sneaking away for private swimming lessons at a secret pond in the woods. But her world is shattered when a suicide bomber strikes in the American heartland; by chance, he shares Maya's last name. What happens to the one Muslim family in town when their community is suddenly consumed with hatred and fear?

I hated this book with a passion. It may seem like a strong statement to make, but I really did. Or maybe I was just too disappointed? Either way, this is a book I'd rather never have anything to do with again and let's see why, shall we?


An overly fluffy romance cleverly disguised as an exploration of Islamophobia, this book set off warning bells right from the word go. The author teases one with promises of what could be, only to let you down along the way and how! You get all kinds of overused desi stereotypes and YA tropes here and they are pretty much what take the story forward. You think things could possibly get any worse and the author proves you wrong- I was near tears by the end of it all and trust me when I say this was the most disappointing book I read in quite some while.

Look, when the major USP of your book is that it's #ownvoices for Muslim rep, you need to at least do the bare minimum and write actual. Muslim. Characters. Maya was Muslim by name, and name only. She wasn't practicing and it's fine, but when a book is touted to celebrate diversity and have a Muslim MC, is it unfair of me to want to see a little of myself somewhere in there? Being South Asian and Muslim just like the protagonist of this story, I was yearning to see a little of myself in Maya and apart from a general discontentment regarding life itself (big mood, huh?), I got nothing. Nada. Zilch.

In hindsight, this was probably the biggest problem I had with this book. For all her being called Muslim, Maya never once actually acknowledged being Muslim except for when she was complaining about the inconvenience of being one (and I tell you, that was a LOT), and that in itself is not a problem- I don't judge her for her lack of apparent religiousness and the extent of her faith or lack thereof, but when you write a Muslim character, you need to, at the very least, portray said character's relationship with religion. What we got to see of being Muslim here was that it was extremely hindering to one's dreams and goals in life to be one, and what little else we got here was either very extreme or very inaccurate, and we could have done without both, thank you very much.

Speaking of USPs-- a progressive story that tackles Islamophobia in America? BOOM. Nope. I mean, tackle this it does, but so much of the story is taken up by Maya's love life that all else takes backseat and you're left wondering about all that this could have been. What we get of the terrorist attack is limited to a single page in between chapters and how it affects Maya is dealt with all too soon. I couldn't help but feel that a precious opportunity to talk about being Muslim in America and all that it entails was wasted here and that makes me mad and salty af, okay? I'm thankful, I guess, for the author showing that terrorism has no religion, but for all the good this book did, she could have very well inserted a line saying that at the start of the book and then gone on to write about what's clearly important- Maya's love life- for the rest of the book.

I get it, Muslim teens deserve to be shown normally too. They deserve epic love stories. They deserve their own narratives. I'm Muslim, and I'd love nothing more than to read about characters who I identify with- but this book does nothing of that sort. The portrayal of being Muslim being lacking aside, Maya's love life, on which the book invested way too much time on, was positively awful. I'll avoid spoilers here but if you're going to spend most part of the book having your MC thirsting after someone (a jock, typical cool guy who's clearly taken, btw), you don't unravel all that by having them planning dates with a random new person at the end of the book with no clue as to what even happened with the other person. That's all I'll say about that.

In case you didn't realize this already, I had no patience for Maya. She was extremely rude, stubborn and selfish and showed no signs of improvement throughout the course of the story. She treated her parents awfully and I kept waiting for her to realize she was being a brat but she did absolutely nothing to redeem herself. The parents were portrayed in a very cliched way and were basically the villains in Maya's story when they did nothing wrong (except give birth to her, that is) and...I'm sorry but where are the desi cool parents at? The other characters were nothing special- the potential ones fizzed out way too early and I was rolling my eyes at how everyone and everything turned out. Hina was the typical Cool Aunt who needed a few lessons on toeing the line, Kareem was doing great till he was brother-zoned, and Maya's friend Violet was the only character I actually liked but she existed solely to be the Wild BFF who somehow always knew what to say and do, so I don't really have much to say about her.

The writing was pretty much the only thing that I liked about this book but not even that could ultimately save this book in my eyes. With all due respect to the author's own experiences with Islamophobia, I still couldn't help but feel the general hype surrounding this was undeserved. With so much untapped potential and so many unexplored themes, Love, Hate and Other Filters was a disappointing representation of culture and religion that did more harm than good. Please do better next time, Samira Ahmed.