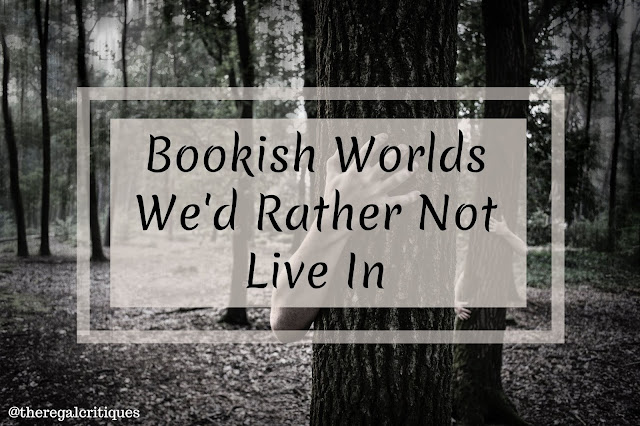 Hello, friends! One of the reasons why I adore reading so darn much is that books have the power to take readers to gorgeous and magical places - most of which I'd love to visit in real life. However, there are certainly some dark, vicious and creepy as fuck worlds out there that neither Clare, nor I would like to go near. Ever. Today, we brought you ten of these.

MYTICA in FALLING KINGDOMS. There is a lot that I love about this series and this world but you could not pay me to live there. I'd be dead in days and it would just be embarrassing. This is a bit like Game of Thrones for a YA audience which means torture and death and all those things I don't want in my life.

PANEM in THE HUNGER GAMES. In a recent TTT I said I wanted to visit the Capitol (and I do) but I'm talking now about The Hunger Games themselves. I automatically try to resolve all conflicts because I hate arguments and fighting. So picture me, in the middle of this Battle Royale just trying to talk to everyone about their feelings. It would either be hilarious or very short-lived but either way it seems like a bad idea.

THE HAZEL WOOD. Oh I love The Hazel Wood, it's beautiful and creepy and everything that my fairy-tale loving heart could want. Except. You have to relive the same story over and over again forever. And I could not take that.

MIDDLE-EARTH in THE HOBBIT. I was discussing this post with my brother (who doesn't read) and he said the one place he wouldn't want to live is "that bit with all the spiders from The Lord of the Rings". And I concur. But I'd spread it out to the whole world except the Shire (because it seems delightful there). There are just Orcs and Uruk-Hai and ringwraiths and well meaning adventurers all over the place and ugh I just could not deal with it.

THE DUST LANDS in BLOOD RED ROAD. I might be remembering this wrong but I think there are NOT A LOT OF BOOKS in this world. It's set in a dystopian future and so much has been lost. I wouldn't enjoy the dehydration or the starvation or the constant gang struggles either but it's the lack of reading material that really bothers me here.

THE CULT THE SACRED LIES OF MINNOW BLY. While this novel takes place in the real world, the cult where Minnow was forced to live was something out of a horror story, even though, yes, obviously, some people, unfortunately, have to deal with situations like that. Whatever can be wrong with society was wrong there, I swear. *shudders*

THE UNDERGROUND WORLD OF RAZORLAND. Honestly, most dystopian novels I've read could make this list, but the fact that the characters in the Razorland novels live underground maxes this one extra creepy for me. I dislike the dark. A lot. So this would be horrid.

THE FAE INVADED WORLD OF THE FEVER SERIES. The Fae are hella interesting, seriously. But to see them wrecking havoc in the human world as they were doing in this series? *shudders*

THE FUTURISTIC WORLD OF THE DIABOLIC. Wow, where should I start? First of all, the whole "let's stay ignorant forever, and stop studying hahah" attitude was so darn dangerous. Their spacecraft, for example, was becoming unreliable, but they couldn't fix it, BECAUSE THEY WERE TOTALLY CLUELESS ABOUT TECHNOLOGY among other things. Also, the royal family was savage as fuck. They were killing TONS of people both of the lower and higher classes, AND their own. Would not live there.

THE WAR-DESTROYED WORLD OF ILLUMINAE. When two of the biggest corporations started a war, a shit ton of people had to die. It became a miracle if a person's relatives alive. Horrible conditions among those who survived, over-crowded spaceships, enslaved planets... this world did not have one truly happy place left.

LET'S CHAT!
Have you read any of these books? Which worlds would YOU not like - or like to - live in? SHARE A LINK TO YOUR TTTs!!