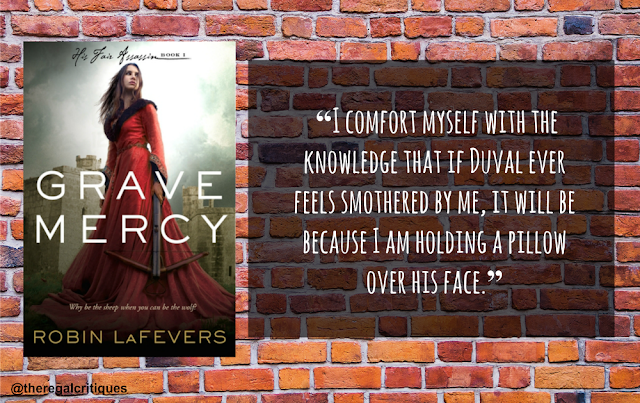 THE book that made me want to write this post in the first place, because I needed to flail about it & push y'all who haven't read it yet a tad bit into its direction. Yes, it was THAT good.

⚔️ The main characters are assassin nuns, ASSASSIN NUNS!! Is that not reason enough?? They are vicious and well-trained in all the different methods of killing AND they are excited about said killings.


⚔️ The romance is super-cute, it's the kind where the heroine tries to ignore it for a while, BUT THERE'S NO IGNORING THIS CHEMISTRY. There is banter, there are arguments, and ah, it's such a wholesome relationship where both individuals are equally strong and smart. (My favorite couple of the trilogy, actually.)

⚔️ There's so much scheming, politics and trying to guess what the enemy will do next without knowing who the enemy is. Both the hero and heroine are really intelligent and they work together super-well.

⚔️ We don't necessarily see TONS of this in Grave Mercy, but the scenes between Annith, Sybilla and Ismae are AMAZING. All three of them are incredibly different from each other, yet they work really well together, and you can definitely see how much they cherish their beautiful relationship. Each girl would risk her own life to save the others, and they prove this time and time again in the series. 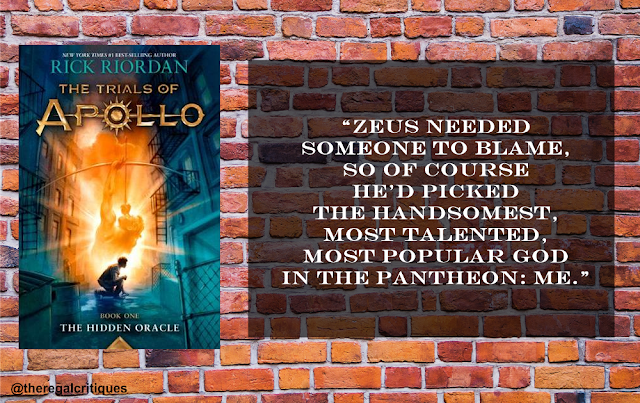 I haven't read all of Riordan's books, but I gotta give it to him that he does a pretty cool job of creating books that both younger and older readers can enjoy. His novels are light, fun and have some truly hilarious lines AND epic characters.

I picked up The Hidden Oracle on a whim, but I'm so glad I did, because of these reasons:

🎻 Apollo is SUCH AN ICONIC CHARACTER. Sassy, full of himself and utterly lost in the mortal world. (Would I slap him IRL? YES. Do I love him as a character? Absolutely.) He reveals so much about himself throughout the book, and shows his more vulnerable side, and ah, just read it. Also, the way he cares for his children when he gets to know them is quite adorable. Such a proud dad.


Clearly that was not true. She looked as if she'd just gone through Hades's haunted house. (Pro tip: DO NOT.)

🎻 Riordan always manages to surprise me with utterly brilliant supporting characters. And it's not even just the campers and Meg, who was fantastic, by the way. But there are also magical creatures like Peaches and the Geyser Gods introduced, and you really have to realize that he is so fucking creative.

🎻 There is no romance! *parties* I just love when a book, especially a first in a series, concentrates on the plot and the characters, and doesn't immediately starts a romance sub-plot. That said, Apollo is very clearly presented as pansexual, meanwhile Will and Nico are SO DARN CUTE TOGETHER. So, okay, there is romance between the side characters, but it's different, because they are in a solid, LOVELY AS HECK relationship.

“Will put his hand on Nico's shoulder. "Nico, we need o have another talk about your people skills."
"Hey, I'm just stating the obvious. If this is Apollo, and he dies, we're all in trouble."
Will turned to me. "I apologize for my boyfriend."
Nico rolled his eyes. "Could you not―"
"Would you prefer special guy?" Will asked. "Or significant other?"
"Significant annoyance, in your case," Nico grumbled.”

Have you read either of these books? Do you want to? ARE YOU EXCITED FOR THE FOURTH HIS FAIR ASSASSINS NOVEL?? Not sure if you can tell, BUT I CANNOT WAIT OMFG. Also, which is your favorite His Fair Assassins book??
Written by: Veronika @ Wordy and Whimsical date: 05:00