How To Keep Your TBR In Control: Trying Out & Rating Different Methods 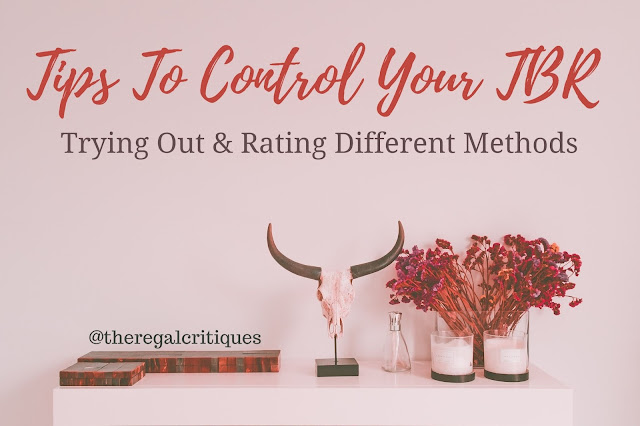 Hello, friends! As bookworms, many of us suffer from over-flowing to-read piles. Some of us have the privilege to own an unbelievable amount of books - either as physical copies or ebooks - while others have to battle with incredibly long wishlists when picking their next. And, yes, of course there are some, myself included, who struggle with both.

What I'm trying to say here is that, one way or another, most bookworms are buried under massive to-buy and/or to-read-owned book piles. Keeping track of all that, deciding how and when to get rid of books can prove to be tough. Helpful tips are all over the internet, which is great! But sometimes, it's hard to predict which method would be the best, and how exactly to go about doing it when there are no pointers given. To help you with that, in today's post, I'm here to not only list some common methods, BUT to also showcase how well they worked for me, what difficulties I faced, etc. while trying them.

Disclaimer: This is only MY opinion. I cannot guarantee that what works for me, will work for you the same way. With that being said, I did my best to stay as objective as possible when commenting on these methods. So let's get right into this!


First thing you should note about them is while they are very popular, they don't work for everyone, and that's totally fine! But they can be super-useful, and here's what I learnt when I was on a book buying ban:

1) You should pick a concrete start and finish date.

Something I do a lot, and I mean a lot, when I have to do something - e.g. studying - is that I promise myself "I'll get started on this tomorrow, for sure!", and then I keep telling myself this for days without end. Obviously, the only thing this accomplishes is making me dread the whole thing more, so stop! with! that! Pick a date, and actually start you book buying ban.

Choosing a concrete time for the end is super-important, as well. It is hard to push yourself when you have no idea when you can stop. Try picking a date, OR a goal you have to complete, e.g. if I read half of the books I own, I can get more, or if I have put aside X money I can stop the ban.

2) You might want to find a partner in crime.

This is such an underrated thing, but can make or break any challenge you set for yourself. It is much easier to suffer alongside someone, so if you can find someone who wants to do the same thing? That's the best thing ever!! You can complain to each other and cheer each other on when one of you is ready to give up. If you cannot find someone else who's ready for a book buying ban, try finding a family member or close friend who will keep you in check, and who will berate you if you end up screwing up.

3) You should set very clear rules for yourself.

Exceptional situations can arise, so do try to consider these when starting a book buying ban. While on a ban, it has happened to me that a book I really, truly wanted was around 50% discounted. Obviously, it is worth it, but wouldn't that be breaking the rules?? Depending on your own judgement, leave - or don't - yourselves little loopholes for situations like these.

4) You should NOT give up after the first - or even hundredth - time when you break the rules.

This is something I struggle with SO MUCH. And not just in book buying bans, but in every part of life - if I screw up once I want to give up immediately, WHICH IS ALL WRONG, AND YOU SHOULDN'T DO IT EITHER. It can feel like shit when you fuck up, and it IS the perfect excuse to give up the whole thing, but push on even if you do make some mistakes throughout.

Depending on your ability to follow the rules you set for yourself, book buying bans are incredibly useful. Personally, I'm a very competitive person, so doing it with someone helped me TONS, because I didn't want to be the one to fail first haha. The one thing, however, is that you should definitely set CLEAR rules for yourself - I've tried book buying band prior to doing one for this post, and they mostly failed simply because I didn't have a concrete idea of when I planned to stop, what exceptions I should allow myself etc.


DIFFERENT WAYS OF KEEPING TRACK OF WHAT YOU ALREADY OWN

1. Divide your TBR based on genre, length or anything you want to.

I didn't use to organize my to-read list on Goodreads in any way whatsoever. However, around a year or so ago, I decided to give it a chance, and wow, it made my life so much easier!

I mostly divide my books based on if they are standalones, sequels, first books in a series, OR by themes, as in, ones that are perfect for Christmas, for Halloween etc. I also used to have an "unsure" shelf, which... didn't really work for me, but you might want to consider it, because it certainly has its benefits.

2. Keep the physical books you haven't yet read on a visible shelf, clearly divided from those that you have already read.

I'll admit that I tried my best to organize my shelves this way, but I failed miserable. It just feels SO UNNATURAL to, for example, own various books by the magnificent Holly Black, and then divide them based on read/unread. I WANT THE BOOKS BY THE SAME AUTHORS AT THE SAME PLACE. Khm.

BUT! I do think it's important to put unread books to a visible place on the shelves as a reminder of my failure as a way to remind myself of what I still need to read.


TEST #3:
WAYS OF CONTROLLING YOUR WISHLIST


This part of my post is about the type of "rules" you can set for yourself to keep your wishlist in better control.

Tip #1: Try limiting the number of books you are allowed to have on your wishlist.

A few years back, I limited my Goodreads to-read shelf (which is a combination of my wishlist and owned-tbr) to 300 books. That is STILL a massive amount, in my opinion, but it's much easier to manage than the 1000+ books I used to have on it before. OBVIOUSLY, you all know best what number would work best for you, but I do recommend challenging yourself this way, as it pushes me to be stricter, more responsible when deciding which books I'm truly interested in.

Tip #2: Go through your wishlist at least twice per year.

Y'all, if you think it's hard to do so, boi, I can relate to that! It took me many a failed attempt before I was able to bring my old, massive to-read shelf down to around 300 titles. To be honest, the reason I'm so meticulously keeping it in order is because I remember those experiences all too well.

Some tips to help you delete books from your TBR:

1. If you don't remember anything at all about a book, even though, you know you've read the blurb various times? It probably should GO, because it obviously didn't make a huge impression.

2. CHECK THE REVIEWS! It is super-important to check both positive and negative ones. I love list reviews and reviews where what they liked/disliked is clear, so I can ponder a bit if those things would bother me. For example, if I see someone say the heroine was "unlikable and rude" as a negative thing, but those things seem super-cool to me, then yay, go for it.

3. Ask friends who've read them already if they think I'd like them.

4. Alternatively, you could say you don't want to read anything under a certain average rating. I don't do this, for three reasons: (1) it's unfair to indie novels, which I see constantly rated down for the dumbest reasons, (2) in MANY CASES books by minority authors are rated in an unfairly harsh way, (3) this method overly favors novels by popular authors with a passionate and massive fan base (think Cassandra Clare or Colleen Hoover).


And that concludes my post about all the different methods I could think of to help you keep control of your ridiculous tbrs. HOPE YOU LIKED IT, and that you actually found some usable advice, although, I'll admit that this topic has been discussed SO MUCH that I'm unsure if I've contributed to it or no haha.

NOW IT'S YOUR TURN TO SHARE YOUR EXPERIENCES:
Have you tried any of these methods? Did they work? How do YOU keep track of your tbr and not let it get out of hand?? Share with me your - very surely awesome - ideas!