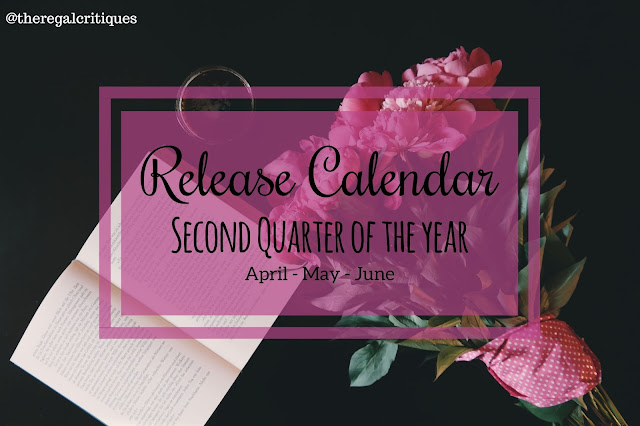 Hello friends! Today, much like in the beginning of every month, we brought you some of the most exciting book releases we could dig up. However, unlike before, we decided to do a release calendar every quarter of the year, instead of every month, quality over quantity and all that. That means that for today, we've showcased the new releases of the second quarter of the year (April, May and June) that we couldn't be more excited for. To limit the length of this post, we've only shared 4-4-4 books per month, so you'll find the total of 36 books in this post. Have fun browsing through our mini-lists!

April seemed strangely void of new releases that piqued my interest, so it wasn't that hard to pick these four. Starry Eyes seems like something I'd love: the best friends-turned-best enemies pitched together due to strange twists of fate is a trope I'm not tired of yet, and this one seems to have nailed it, going by reviews I've come across so far. I haven't read anything by the author yet, so this is as good place as any to start? The House With Chicken Legs is a Baba Yaga retelling and since I loved the original story, I'm quite very interested in seeing how it has been adapted in this MG book. Picture Us in the Light first caught my attention because the cover is strangely reminiscent of You're Welcome Universe by Whitney Gardner (which I've had in my TBR since forever, oops) but I was soon very curious about this book once I read the synopsis. The fact that this is #ownvoices makes it all the more promising! And finally for April I have Stay Sweet, which seems like a perfectly fluffy chick-lit. God knows when I read one of those last. I haven't read anything by Siobhan Vivian yet, either, so it's only right that I should add this to my TBR, right? Right.

April is a month in which so many of my most anticipated reads of 2018 come out so it was hard to narrow it down to just four! Ace of Shades was an obvious choice for me - Daughter of the Burning City was one of my favourite books of last year and it catapulted anything Amanda Foody writes to the top of my wishlist! Devils Unto Dust has been creeping up on me. I initially wasn't intrigued but the combination of the cover and the dark blurb have grown on me to the point where I am now incredibly excited to read it! Cindy Anstey is another author whose previous books have made me eager to read more by her and Suitors and Sabotage sounds suitably fun and romantic. And Shadow Call is the sequel to a book that thoroughly surprised me last year back when I wasn't that big a fan of Sci-Fi. This was the series that changed my mind and if you want diversity and spaceships definitely give it a try!

Y'all, April is going to be FILLED with new releases, so it was massively hard to pick only four titles, BUT I WAS STRONG AND DID IT. It was no question that I absolutely needed to include After the Wedding, as I've read each and every novel Courtney Milan has published, and adored the majority of them. Sky in the Deep looks so damn badass + as far as I know, it is a standalone?? And standalone fantasies are SO RARE that I need to get ALLL I can find. Caleb Roehrig's debut, Last Seen Leaving, was freaking EPIC, so yes, I'm super-pumped for his second, equally great-sounding book, titled White Rabbit. As for Leah on the Offbeat, how could I NOT be excited?? Becky Albertalli is one of my favorite authors, and Leah is a complex, all-around-realistic character whose story I cannot wait to hear.

OK so I actually haven't read the second Trials of Apollo book yet but that doesn't stop me from being impatient for the third book to arrive and any Rick Riordan story is going to be incredible so The Burning Maze had to make the list! I actually am lucky enough to have an advance copy of The Smoke Thieves so watch out for a review of that nearer release date, anything that is compared to Game of Thrones is a must read for me! Onyx & Ivory has that perfect combination of gorgeous cover and intriguing plot - I've also heard great things about Arnett's writing. And of course Game of Secrets is calling out to me because shadowy organisations and magic, and historical fiction - it's impossible for me to resist!

Well... for me, April certainly has had more releases to offer than May, BUT quantity does not equal quality, of course, so, perhaps, May will be even better. It certainly has some titles I cannot wait for. All of This is True by Lygia Day Peñaflor sounds like a messed up mystery novel where all the main characters see events of the past in a totally different way. L O V E. Then, Furyborn by Claire Legrand apparently has badass female leads, morally grayness and well, it seems like a deliciously detailed story based on the reviews. Jen Wilde's Queens of Geek was SO CUTE!! So anything she writes gets an automatic YES from me, thus it's not question that I'll be getting The Bright Siders. As for War Storm... I'm not fully interested in this, but, as I already own the third book - which I haven't read yet, given that book 2 was awful - and liked Red Queen, I'll certainly get this, and just fight through the two books right after each other even if I hate them.


May has a LOT of promising new releases and I did have a time zeroing in on just four to feature here. I ended up including Girls for the Vote (originally Polly's March) because it seems like an incredibly important book, and it's MG, so I'm curious as to how the author would have dealt with a subject as this for a younger audience. Next is My So-Called Bollywood Life because...well, do I even need to explain? Ownvoices, Bollywood, romance? Sign me up already! On a serious note, though, I really, really hope it lives up to my very high expectations. LIFEL1K3, well, I haven't yet read anything by Jay Kristoff before though I was incredibly hyped for Nevernight once upon a time, but this one sounds just spectacular and something I'd lap up without a second's thought. The same applies for Legendary. I haven't yet read Caraval despite having it around since forever, but I'm still awaiting the sequel. Maybe I'll read Caraval closer to the release of this one!

Guys, June might not have the mostest new releases, but it certainly has some books I've been waiting for for the loooongest time. As you might know, I'm an enormous fan of the Psy-Changeling series, so a new book is ALWAYS exciting, and I am desperately hoping Ocean Light will finally provide concrete info about the water changelings. My Plain Jane will certainly be light-hearted and funny as heck, so it's definitely a book perfect for the summer. Fat Girl on a Planeby Kelly Devos and Running With Lions by Julian Winters are two #ownvoices contemporaries (fat, and M/M + black rep respectively) I'm massively excited for. I mean the latter has the "best friends to enemies to lovers", while the Fat Girl on a Plane is about an aspiring fashion designer, wanting to create clothes for women of all shapes and sizes. *cries tears of happiness*

June had me in a fix because I couldn't decide on the four I was mostest excited about. I had to include The Extinction Trails - Exile because I read the first book recently and quite liked it. The sequel has a lot of potential, that's for sure! Mariam Sharma Hits the Road is a book that made me add it to my TBR the minute I first set my eyes on it. It sounds just fantastic- come on, Muslim friends on a road trip through the US? GIVE IT TO ME ALREADY!!! Smoke in the Sun, again, is a sequel I'm looking forward to despite having not read the first book. Don't judge me!!! Not the Girls You're Looking For is another #ownvoices book with a Muslim MC that I'm super-hyped for! Lulu Saad sounds like a character I'd love and relate to, and I can't wait to see if the book lives up to my expectations!

June seems like a quiet release month for me. That said some of my most anticipated of the year are released in June so it's still an exciting month! Exile is the sequel to The Extinction Trials which I really enjoyed - anything with dinosaurs is an instant yes for me so I'm excited to see where the story goes next. Sabaa Tahir's Ember in the Ashes series was an instant favourite for me when the first book released so of course I'm hyped for the release of A Reaper at the Gates. No TBR of mine would be complete without an historical romance and Sarah MacLean is a personal favourite so Wicked and the Wallflower the start of a new series is a definite read for me! And finally, possibly my most anticipated book of the rest of the year - My Plain Jane - I adored their first Jane book and this looks just as incredible!!