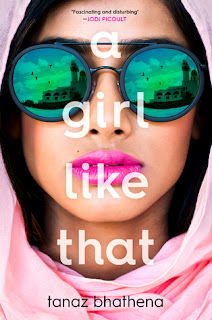 A timeless exploration of high-stakes romance, self-discovery, and the lengths we go to love and be loved.

Sixteen-year-old Zarin Wadia is many things: a bright and vivacious student, an orphan, a risk taker. She’s also the kind of girl that parents warn their kids to stay away from: a troublemaker whose many romances are the subject of endless gossip at school.  You don't want to get involved with a girl like that, they say. So how is it that eighteen-year-old Porus Dumasia has only ever had eyes for her? And how did Zarin and Porus end up dead in a car together, crashed on the side of a highway in Jeddah, Saudi Arabia? When the religious police arrive on the scene, everything everyone thought they knew about Zarin is questioned. And as her story is pieced together, told through multiple perspectives, it becomes clear that she was far more than just a girl like that.

This beautifully written debut novel from Tanaz Bhathena reveals a rich and wonderful new world to readers. It tackles complicated issues of race, identity, class, and religion, and paints a portrait of teenage ambition, angst, and alienation that feels both inventive and universal.

Received an ARC in exchange for an honest review via NetGalley

I don't remember when exactly I stumbled upon this book, but ever since I first lay my eyes on it, I knew I had to read it. Therefore. I was extremely elated when I managed to land myself an e-ARC, and I dived into this unique story that promised diverse characters, a gripping storyline and more. Did this book deliver what it promised? You bet it did! As with most things, though, there were both things that I liked and things that didn't quite work for me, so let me list out both for you, and then you can decide for yourself if you should pick this one up! (Hint: You should)

• The story starts with both Zarin and Porus, the two main characters, dead, and it is only then that we see all the events that lead to it. The story is narrated in multiple POVs, and we see the whole story unfolding through many perspectives. This helped give the story more depth and also helped us understand each character more.

• The characters themselves were wonderfully complex, flawed and...human. I don't think I'd be able to name a character I loved, since I wouldn't exactly call any of them likeable, but that's also exactly where the author scored. The characters are all so real- they mess up, they try to make things right again, they succeed, they fail, and then we see others stumbling through the same all over again. Relatable? Quite very.

• The setting- the book is set in contemporary Saudi Arabia- Jeddah, to be precise- and the author does a great job in conjuring up the world for us. At times it's too raw, too real, but this book provides an unflinching look at things, and the author should definitely be lauded for that.

• Extremely important topics and issues are dealt with throughout the course of the story, with religion, bullying, sexual abuse and rape culture being a few of them. The author doesn't shy away from dealing with heavy topics, and while it might come across as too harsh at times, these are things that absolutely need to be talked about.

• And oh- need I mention that it's diverse, and #ownvoices for Zoroastrianism and expat life in Saudi Arabia at that? This was my first time reading about a Zoroastrian main character, and it was enlightening, to say the least.

Things That Didn't Quite Work For Me:

• The writing. While I'm not looking for purple prose in a book such as this, I couldn't help but feel the writing could have been better, especially given the format of the book. This could have been because the author was trying to make us understand the characters more, but things felt a tad bit over-descriptive at times.

• The other thing that slightly bothered me was how predictable the story was- not exactly because we already knew what was in store for the MCs, but in terms of everything that happened in general. The plot was quite ordinary, once you strip away the diverse elements, and well...let's just say I like being taken by surprise.

• That brings to my other point. Being from a very conservative culture, quite similar to that depicted in the story, I couldn't help but feel the setting and culture was used too...negatively? It's the way things are, I agree, but don't we already have way more than necessary portrayals of this side of Islamic societies? It would have been nice, for once, to read of the other side of such societies- the side that isn't given as much attention. A fresh perspective?

• This last point is more my fault than anything else, but on reading the blurb (and seeing the cover- the hijab) I was expecting a Muslim protagonist. This wasn't a problem per se, but it would have been better if I had know to expect it beforehand?

All said, this being the author's debut, I'd say A Girl Like That was pretty freaking amazing. It was real, raw, unflinching and relevant, and if at all anything I mentioned here appealed to you, don't think twice! Pick this one up as soon as possible!