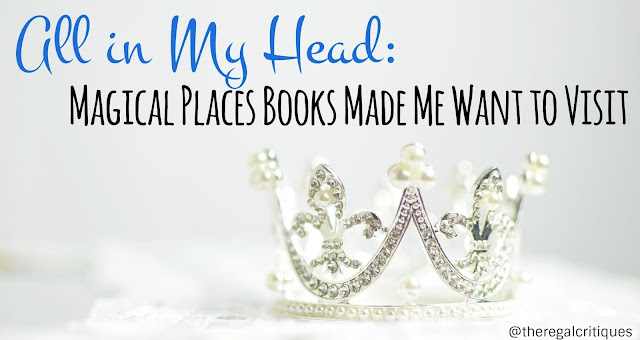 Hello, friends! Veronika here, and wow, I'm so excited to share with you today's post! Clare and I are both massive fans of fantasy novels, and so it only seemed logical to share with you magical places instead of real life ones. So, breaking the rules of Top Ten Tuesday a bit (hosted by That Artsy Reader Girl), let me present the 14 (7-7) places we'd love to visit.... emphasis on the visit, you'll see why.

The world of the fae in The Cruel Prince. But only if I have a reliable guide who won't let me die, because, boi, this world is freaking creepy. On a side note, I was so impressed by this book/world that I even created a Pinterest board for it.

The Hazel Wood. Same about the guide, because this is a world where you can get lost and killed VERY easily. That said, the Hazel Wood was so intriguing that I would 1000% visit it if given the chance. It has a very scary, dangerous atmosphere, but thanks to all the lovely people who got stuck there it also has a friendly sort of feel to it.

The world of the Study series.  I mean, Valek is reason enough to want to visit this world, but just in case you don't agree, I'll be nice and list other stuff, as well. THE MAGIC is super-interesting, and wow, just imagine all the time one could spend touring Ixia and Sitia. The Commander's castle, THE KITCHEN AREA IN IT and all the different districts in Ixia, and then you can head to Sitia to check out the Keep and the jungle where the Zaltanas LIVE ON TREES. I mean, who could say no to all this?

The world in His Fair Assassin, aka medieval Brittany, BUT WITH MAGIC. Honestly, such an impressive world where real life events and magic align in a way that creates one of the most fascinating stories ever.

The futuristic world of the Starbound series. I debated quite a lot over which sci-fi novel to pick, and ended up deciding next to these because they not only have amazing technology, but also truly unique supernatural creatures that are (mostly) nice. Also, I'd sell my soul for a chance to join this squad.

Hotel Valhalla in Magnus Chase and the Gods of Asgard. (But only if I don't actually have to, you know, die to go on a visit there.) HOW EXCITING would it be meet all those people from different eras, and hear their stories. Also, the gods and all other magical beings (Otis, for example) sound delightful... or delightfully annoying.

The world of Uprooted. I've read many a fantasy novel that claimed to feature a dark, sinister forest, but none that was quite like the forest of Uprooted.

Narnia in Chronicles of Narnia. Before they "saved" it. Eternal winter sounds hella fun to me (I'm horribly pale, burn easily and I'm scared of flies so....). The magical creatures would also be a strong draw here!

The Capitol in The Hunger Games. OK so I know this sounds fully STUPID. But hear me out. The fashions are crazy and I'm only visiting right? I can go home at the end of the day having seen wild and crazy fashion moments.

Orlais in Dragon Age. Reading the books expands the whole world more than just the games on their own. But Orlais gets my vote because again amazing fashion, and everyone there talks in riddles and metaphors and I would be SO GOOD at that. So good.

Wonderland in Alice in Wonderland. This was the first book I ever read so maybe the world just sticks with me so strongly because of that but I think it's probably that it's so well drawn and crazy and unique. And yet totally British. Such politeness and tea drinking amidst the beheadings.

Earth in The Extinction Trials. Dinosaurs. DINOSAURS. I mean sure, death and horror and all that fun stuff but DINOSAURS.

Victorian England in Soulless. London (my birthplace) but with added dirigibles and vampires and werewolves. And parasols everywhere. What's not to love.

Kaitan in Shadow Run. I would love to be part of the crew on the Kaitan. Being in space in general would be amazing but I love this tight knit crew so, so much!

Question Time!
Have you read any of the books mentioned? If yes - aren't you just dying to visit these places, as well? What other magical places left a huge impression on you? Oh, and bonus - which worlds/books would you like to visit BECAUSE you want to meet with the characters?
Written by: Veronika @ Wordy and Whimsical date: 05:00