Heartwarming, Heartbreaking and Uplifting: The Unpredictability of Being Human by Linni Ingemundsen 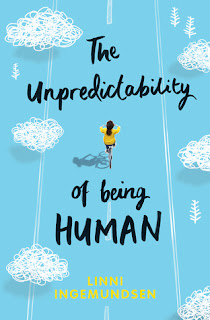 Meet Malin, a fifteen-year-old who sees the world differently. Malin knows she couldn’t change much about her life, even if she got to play God. Her dad would still yell all the time – especially as Malin is still friends with Hanna, the girl she met shoplifting. Her mum would still say a glass of wine is good for her heart – and Mum needs it, with Malin’s brother, Sigve, getting into trouble all the time. And Malin would still be Malin. Because she can’t be anybody else.

In a voice bursting with immediacy and truth, Malin shares the absurdities of growing up and fitting in as her family struggles with the buried pain of mistakes made and secrets kept.

Profound, compassionate and as funny as it is dark, Malin’s story is an offbeat examination and celebration of the brutal, bizarre and beautiful unpredictability of being human.

If you love the freshness and honesty of The Perks of Being a Wallflower, the emotional depth of John Green, and the irreverent wit of Little Miss Sunshine, push this to the top of your TBR pile.

I wasn't asking for much when I picked this book up- I was in a reading slump and wanted both an easy read and something that would hit me in the feels, and this book was just that...AND it brought me out of that slump, so it's a double yay!

The writing is definitely the best part of the book (as it should be, in my opinion). There's something about a well-written book that makes me stick with it even if the characters are less than likeable (which wasn't the case here since the characters were amazing anyway) or whatever way the book falls short. Here the author managed to keep things refreshing while also maintaining that hint of something more, something suspenseful and it kept me hooked from start to finish. I adored Malin's voice and it was unique, endearing and heartbreaking- pretty much the one reason that I was glued to the story in the first place.

"Today my brother Sigve shot seventy-nine people. Some in the head. Some in the chest. A few in the back. All of them were soldiers fighting for the other side.
He doesn't like to shoot them in the back, he says. He likes it better when they see it coming.
He really enjoys these video games of his."

Malin was amazing- she was naive and yet so smart, blunt and yet so thoughtful. She was a character I fell in love with right off the bat and only continued to love even more throughout the course of the story- her blunders, missteps and all. I was happy for her when things went her way, angry on her behalf when she was mistreated, grieved with her when things started going downhill and was incredibly happy seeing her grow in the short time I was with her- she was a character you'd no doubt root for without a second thought. The other characters like the friend she found in Hanna, and her cousin, Magnus, were also my favourites, and despite things not going exactly the way I'd have liked (hint: there's heartbreak and grief involved!), I'm still glad these people were in Malin's life and that they made such an impact on her.

I'm in two minds about my favourite relationship in the book but it's most likely the one between Malin and Magnus. She found a friend of sorts in him and always looked up to him (though she probably wouldn't accept it) and he guided her in ways more than either of them probably realized. The other relationship I loved here was that of Malin and Hanna- the older girl she met shoplifting. Theirs was an unconventional friendship right from the start and it was good to see how Hanna impacted Malin's life- showed her the ways of the world and all. I wish they'd had more down the lane for them but it still made sense that things would go that way. Regarding the familial relationships- it broke my heart that Malin thought things were "normal" when her mother kept drinking, when her father kept losing his temper, when her brother kept stirring up trouble and when everyone kept underestimating her- but it was her normal and I loved how the book treated their relationships. Granted, I would have liked to see more of their interactions, but there isn't much to complain about when what was presented was done well.

"If I got to be God for one day, I'd microwave a bag of popcorn to perfection.
Because if God himself could fix the big stuff, he'd have done it already.
And even if he did, people do such weird stuff, they'd break it all again anyway."

While the story had no plot per se- it was mostly Malin's journey during a difficult phase of her life- it was still very engaging and had me hooked. And also- did I mention the story is set in Norway, where the author herself is from? Yeah, well, that was a welcome change too!

Speaking of the end of the story, though, I felt things were too abrupt and we could have had a more satisfying, prolonged ending, but the epilogue made up for it- to an extent. I liked seeing how things turned out for Malin and everyone involved, and it was a sufficient end to the story. However, here's also where I admittedly had a small issue. While it's understood that Malin is no ordinary child, it wasn't elaborated on what was exactly different in her from most kids her age. It is said (in certain blurbs and author interviews) that Malin has undiagnosed ASD, and it's acknowledged towards the end of the story- but by then it was too little, too late. I wish she had gotten a diagnosis and this was addressed in the book and we got to see more regarding this- but it wasn't and we didn't, and I'm pretty bummed about it. I feel this book could have been just that much more and it's certainly a pity that, ultimately, the full potential wasn't reached.

This is not to say that difficult or potentially difficult topics weren't tackled in the book, though. This is a coming-of-age story and deals with many things like huge family secrets, peer pressure, alcoholism, teenage pregnancy, death and grief, and it's all narrated through Malin's refreshing voice and this book felt, to me, like the cross between The Perks of Being a Wallflower and The Secret Diary of Adrian Mole- which is to say that it was quirky, funny and refreshing, while also unexpectedly deep.  A must-read, pretty much, if you're a fan of contemporary YA.