Fantastic Books With Little To No Romance 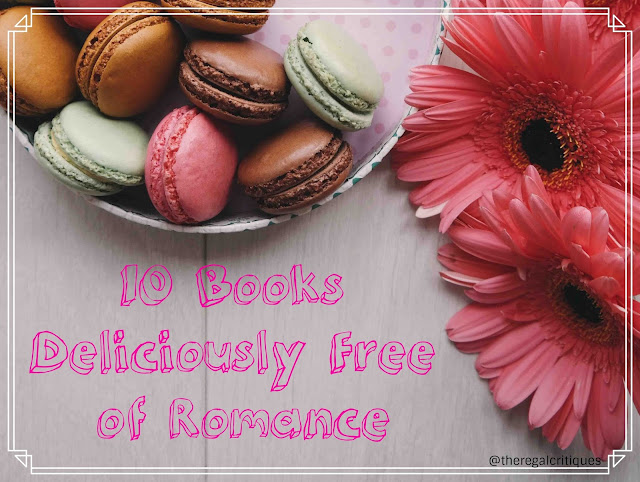 Hello, friends! Valentine's Day is just around the corner, which, I'm sure, all of you know, because around this time it is impossible to head into any store and not see or the seasonal stuff. See, I don't really care about Valentine's Day, imo, it is okay to hate it, but it is also okay to love it. But all the Valentine's Day shit can become too much even for me - besides the chocolate, because, damn, there is no such thing as 'too much' when it comes to chocolate.

Today's Top Ten Tuesday topic is a love freebie, but ahaha, we don't deal in conventional here, so I brought you the exact opposite of that: Ten Books Without Romance, with the hope of giving you all a breath of fresh air in between all the lovey-dovey stuff.

MAGNUS CHASE AND THE GODS OF ASGARD: I haven't read the third Magnus Chase book yet, but the first and second novels had little to no romance in them. Yes, I have a pretty good idea of who Magnus could end up with, and Samirah is in love with a guy, but the romance is barely there. You likely won't even see it with all the jokes,  action, adventure and epic friendships surrounding you.

THE HIDDEN ORACLE: I have only read the first book of The Trials of Apollo, but this one is deliciously free of any romance. Two of the supporting characters - Nico and Will - are in a relationship, but they have small roles AND Apollo himself is nowhere near falling in love with anyone.

THE BEAR AND THE NIGHTINGALE: I'll admit that I was a tad bit let down by this one, BUT it was still pretty cool and I'd still recommend it to anyone who likes fantasy and stories featuring weird (BUT IN A GOOD WAY!) magical creatures. And it has NO ROMANCE whatsoever. Actually, this is historical, so the heroine is very much expected to marry, but hahaha, she does not care one bit for that.

VICIOUS: Not gonna lie, Schwab's novels are frequently a miss for me, but this one was SO GOOD. The characters are so deliciously morally gray, but still freaking lovely, which is a weird combination, BUT IT WORKS.

A MADNESS SO DISCREET: This is such a good, but highly underrated novel, so go buy it!! It deserves so much love, because it is basically a historical Criminal Minds. I can see the potential for a romance in the heroine's future, but there is NOTHING of that in the book itself. Lots of darkness, epic friendships and ah, such a dark, complex and morally gray heroine await you here.

ODD & TRUE: One of my favorite books of last year for sure. Yes, one of the characters has a little bit of romance sub-plot in her story, BUT it is different from what you are probably expecting. Let's just say the book concentrates on the present-consequences of that relationship, and the closure of it. The story itself features epic sisters, amazing adventures, maybe-ghosts, would be monster hunters and gloomy places.

THE BOOK THIEF: I'm pretty sure that most of you have read this one, but for those of you who haven't, this is a perfect anti-Valentine read. It centers around family and friendship, as well as the Holocaust and the Second World War. Heartbreaking, powerful and gorgeous, literally told from death's point of view.

THE CATCHER IN THE RYE: I love this one way too much not to include it! Also, I ain't dumb, I know when this was written it counted as a contemporary, but shh, let this post breath. Here's the thing, I honestly can't imagine anything less Valentine's Day related than a book where the main character seemingly hates 99% of the population. So you have it. Perfect.

GIRLHOOD: This one centers around grief, friendship and obsession, and it has absolutely NO ROMANCE in it whatsoever. It gets dark and creepy at parts, but somehow still manages to close on a positive, girl power note, so yay.

DEVOTED: This book, y'all, this book deserves so much love and appreciation, and I am heartbroken it is so underrated. It is about a girl who lives in a cult-like religious community, and showcases her journey to freedom through leaving, growing and becoming independent. So powerful and gorgeous. As for the romance, you can definitely see that there is probably going to be something there in the future, but throughout the book there is only friendship, WHICH INVOLVES THE GUY LENDING HER BOOKS, SO THAT'S ADORABLE.

So you have it! These are my top NO-ROMANCE picks for today. Have you read any of these? Could you recommend me some books without any romance? Or with minimal romance? I AM VERY MUCH AWAITING YOUR COMMENTS.