17 Fantastic Authors I Discovered in 2017 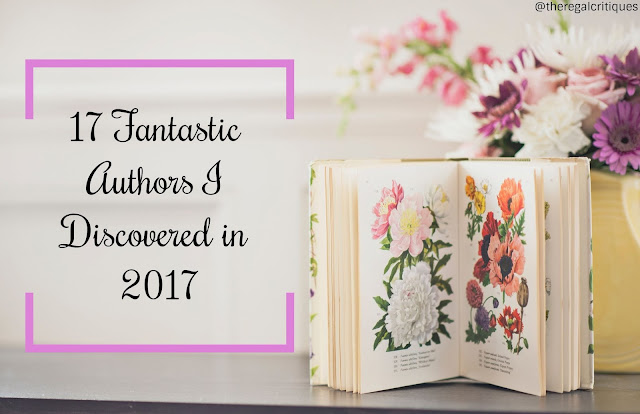 Hello, friends! I am happy to say that after taking a few weeks off from Top Ten Tuesday (a weekly meme hosted by The Broke and the Bookish), I am back with a new, totally awesome list for your enjoyment. I was very satisfied when I saw today's topic, because 2017 was the year when I discovered SO MANY new-to-me authors, and also read quite a few awesome debuts. So, of course, I ended up sharing way more than 10 authors - 17, to be exact - but I feel like those of y'all who are regulars here aren't even surprised I'm cheating with the number. I always do, to be honest.

It is safe to say that these two authors nominated my 2017, as I've managed to read nearly every book they published. (I actually believe I read all of Courtney Milan's books?? Only some of her novellas remain unread.) Yeah, I think that tells you just how impressed I am by their novels.

Courtney Milan writes both contemporary and historical novels, however, she has a lot more historical fiction than contemporary books, so maybe start there? Her casts are incredibly diverse, memorable and her books are hella feminist, so yeah, super-good. Seriously, she is an outstanding author who deserves a lot more attention than she's getting. I included Trade Me here, which is one of the two published contemporaries she's written, and it is hands down my favorite NA novel of ever. Meanwhile, The Duchess War, first in the Brothers Sinister series, is one of the best historical romances I've ever read with a truly fierce heroine, adorable hero and all-around awesome cast and relationships.

Deanna Raybourn, on the other hand, mostly writes mystery novels, all of which are historical fiction. She is amazing at creating intriguing stories that will stay with you long after you put down the book, and the who-dun-it is NEVER easy to guess. Also, the romance in the Lady Julia Gray series is THE! BEST! THING! EVER! She is the kind of author who includes very few romance-y scenes, yet, you cannot help but root for the couple.

I grouped these two YA authors together for two reasons, (1) they both write historical novels, (2) both the His Fair Assassins and Stranje House series feature a strong group of female friends who support each other through everything. I mean, it is TRULY lovely to read about such epic, sister-like female friendships. LaFevers, unfortunately, only has three books published (more are coming in the same series, though!), but Baldwin has many novels I haven't read yet, so yay for that!

Lisa Kleypas is one fantastic historical writer, and I've become quite a huge fan of hers in the past year. I love how she puts a great emphasis on creating these fantastic friendships, as in the Wallflowers series, OR families, as in the Ravenels series.

THE KING OF NA NOVELLAS FOR SURE. In Peter Darling Peter Pan and Captain Hook finally HOOK UP, and, yes, that is as satisfying to see as we all expected. Both Peter Darling and Coffee Boy contain an adorable M/M romance, #ownvoices trans rep and both are so well written.

These books might not be majorly similar, but all four of these authors are 2017 debuts, my four favorite debut authors, to be exact. Angie Thomas, author of The Hate U Give, has created one of the most powerful and important stories I have ever read. Books like THUG make me proud to be an avid reader of YA fiction. A List of Cages by Robin Roe, a story of two very different boys who are very much like brothers to each other, was hands down one of the most gorgeous novels I've read this year. Queens of Geek, a book taking place at a convention like Comic Con was so so SO cute and diverse and lovely. Last but not least, The Disappearances was a light fantasy novel, set in the times of WWII, in a small, adorable little town.

While I didn't read as many - not even close, dammit - classics as I was planning to, I did discover two fantastic authors: Shirley Jackson and Henry James. The novels I've read by them, We Have Always Lived in the Castle and The Turn of the Screw were incredibly haunting, with a chilling atmosphere and many a mystery to uncover. I can guarantee that you won't easily forget either of these novels after you put them down.

The reason I grouped Maley and Roehrig together is that both of these books are pre-2017 releases with #ownvoices lgbtq+ rep, lesbian and gay respectively. Both have incredible narrators, who are not only realistically teen-sounding, but also very captivating to read about. Dating Sarah Cooper is a contemporary romance with the fake-relationship trope, while Last Seen Leaving is a mystery with the romance being a sub-plot.

These three authors have very little in common, but I decided to list them together based on the fact that they all have various novels published, but I've only read one so far. Want is THE most realistic dystopian novel I've ever read with a very cool heist plot. 180 Seconds is a NA romance that is heartbreaking AND heartwarming, and will ruin you for sure. Burn Baby Burn is a historical, coming of age, spiced up with a little mystery, and it has #ownvoices Mexican rep.


Huh, these were all the amazing new authors I've discovered this year. Who are some that you found in 2017? Have you read anyone from my list maybe?
Written by: Veronika @ Wordy and Whimsical date: 05:00