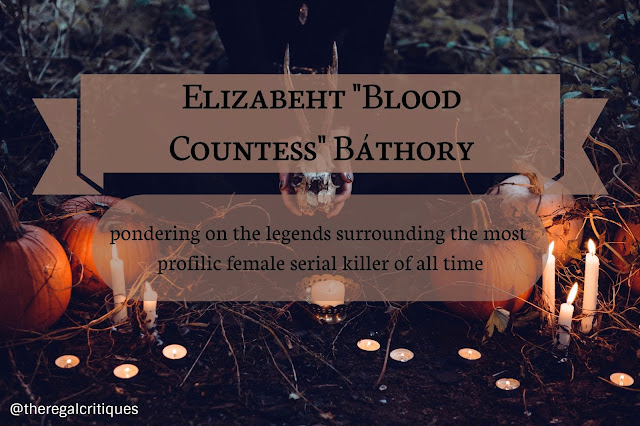 Hello friends! Today I am here with another Halloween-themed post, this time about Elizabeth Báthory, aka one of the most prolific (yes, there's a typo on the picture, I know) female serial killers in history. I'm actually super-pumped to be finally sharing this with you, because I legit worked on this post more than I've ever worked on any essay for university. *shrugs*


Quickly, if you don't know anything about Báthory, here are some of the basics, the tip of the iceberg, one shall say. She's said to have tortured and killed hundreds of people, most of them innocent young girls whose blood she proceeded to drink and bath in to remain youthful and beautiful. I know, yikes, imagine having to wash that blood off of yourself afterwards. She must have had loads of time. On a more serious note, she is actually half the inspiration behind Dracula by Bram Stoker, the other half is, of course, Vlad Tepes.

My original plan was to write about various female serial killers, with Elizabeth Báthory being one of them, but... I kind of fell down a hole researching her. The mainstream media has always painted all the gruesome things in connection with her as facts, and I didn't know any better either. Then I started to look more into her for this post, and as soon as I dag just a bit below the surface (like, below wikipedia and the likes), I found information that seems to suggest that she was, in fact, innocent.

I know, I know, that sounds unbelievable. She is positively notorious. She is even featured in the Guinness Book of World Records as the most prolific female serial killer, for fucks sake, and isn't that a reliable enough source?

Welp, I don't really think so anymore, at least not in this case. Upon doing some research, I found that the evidence against Báthory is VERY flimsy, practically non-existent, and many people, including numerous historians, believe that she did not commit any of the crimes associated with her.

So, instead of writing about her grave murders, as per my original plan, I'm going to discuss in detail all the evidence, or lack thereof, against her. But, also the accusations, because it IS Halloween, and we all love to discuss murder, right? Then you shall decide & vote (!) - was she a horrid murderess, or was she falsely accused and punished?

Elizabeth Báthory was born in 1590, in Nyírbátor to one of the wealthiest, most powerful families of Hungary. Totally unrelated info just to grasp how big of a deal they were - her uncle later became the King of Poland. Elizabeth was highly educated, she could read, write and she spoke four languages, and by all accounts, she was quite intelligent.

At the age of eleven, she was engaged to Tamás Nádasdy, soldier and later chief commander who led successful troops against the Ottoman Empire. They got married when she was only 15, and he 19, and they had 5 children, two of them died at a young age. AND HERE IS MY FAVORITE THING OF EVER: She, knowing full well her family was the baddest of them all, REFUSED to take her husband's name, and kept her own surname, Báthory.

As rich people of the time would do, her husband gave her Čachtice Castle as a casual wedding gift. Throughout her life, she lived either there or at Sárvár, which was where her husband's other estate was. Like I said, lots of conflicts in Hungary at the time - so, the husband being a soldier and all, was away from home countless times throughout the years. Báthory was charged with the defense of his estates each time, which was, frankly, harder than you may think. Sárvár, for one, lay on the border between Royal Hungary and the Ottoman Empire occupied Hungary. She did really well, though! She took great care of the estates, and she is said to have assisted many people she was responsible for, including a woman who was captured by the Turks.

After the accusations started to fly, (we'll get to that in no time, I just need to get the marriage question out of the way) one of the popular theories was that the the toxic relationship between Báthory and Nádasdy could have been the main cause for her becoming a murderess.

However, I call bullshit on that. Here's the thing, there is absolutely no proof whatsoever of there ever being any huge conflicts between husband and wife. I mean, do I think it was a love match? Hell no! But according to actual records from the time before the hearings (so, before all the gossip started up), Elizabeth was a caring mother and wife. Furthermore, two letters she wrote to her husband by her own hand still exist today, both date back to 1595, and neither suggest otherwise. On the contrary, she was writing to him about their children being frequently ill around the time. I don't know about you, but that doesn't seem too bad to me.

THE ACCUSATIONS
a.k.a. the juicy part y'all are here for

Her husband passed away at the beginning of 1604, and it is around this time and the following years when the murders allegedly happened. However, actual records from this time paint her as an energetic woman who, besides taking care of the problems around the estates, married off both her daughters. Again, you decide if that sounds like a woman secretly bathing in the blood of innocents.

The accusations against her arose in 1610. According to records from that time, she was only a shadow of herself by the time the hearings started in September, and she had written her will, leaving everything to her children, by August. She was taken into custody in December of the same year, after being caught in the act of murder by George Thurzo, the Hungarian Palatine, and her two son-in-laws.

It's always been unclear how many people she's actually murdered, the lowest number presumed was in the thirties, while the highest number was well above 600. She was said to have tortured her servants by, among other things, chaining them for the night, strangling them, brutally stabbing and cutting them and literally all the unthinkable horrors - and probably more - that one can think of. However, the whole drinking and bathing in blood rumor surfaced more than a century later, so that part, at least, is obviously untrue.

Of all 327 witnesses only 67 gave an incriminating testimony against her, and only EIGHT of them said that they heard that she tortured and killed hundreds of women. Yes, they heard about it, not saw with their own eyes. Two people said they saw Elizabeth murder or torture people, but neither of them gave the number of the supposed victims.

It is also worth noting that it is very likely that the people of Elizabeth's household were tortured before their hearings (this was standard procedure around the time, god knows why), and so their testimonies are mildly unreliable at best. There were also inconsistencies within people's own statements, which would make perfect sense if they were really tortured before their hearings.

Another important detail is that there were three or four key-witnesses who were said to have been Elizabeth's main accomplices. All four of them were swiftly executed after being convicted. Yes, that means that the key-witnesses of the case could never give their statement on Elizabeth's trial, because they were killed before. Oh, but it gets better/worse - she never actually got a trial, which means that she, herself, was NEVER officially convicted.

She was, however, punished severely. Thurzo, the Palatine of Hungary, came up with the verdict himself - which was incredibly horrifying. Elizabeth was walled into a windowless room in the Čachtice Castle (that fucking wedding gift), with only a hole on the wall so she could be fed. No one was to communicate with her in any way.

Now, I've seen it thrown around that she wasn't legally tried, because she was an aristocrat, and that would have been really embarrassing for her, but that doesn't seem to ring true. The then king of Hungary asked Thurzo various times to give Elizabeth a real trial, as that was her birthright. Well, Thurzo, the sneaky bastard, managed to set the matter aside for years, leaving Elizabeth locked up in her cell until she died on the 21st of August, in 1614.

George Thurzo was an ambitious and forceful man who basically did whatever was necessary to get ahead in life. I found info about him using his connections for his benefit and casually backstabbing people he didn't need anymore. He was also incredibly loyal to the Holy Roman Empire, and that is said to have been one of the big reasons why he got ahead so quickly. An ass-kisser, god, how I hate those.

He was working to claim the throne of Transylvania for his son, which was, apparently, something Elizabeth was also interested in obtaining, either for her own son (only 12, but a legalized adult) or her cousin, depending on who you ask. Either way, as she owned the most land in Hungary and her whole family was out of this world powerful, she had a much bigger chance of getting what she wanted than Thurzo.

It'd make sense for a person with Thurzo's record to try to somehow ruin her to get what he wanted. And lo and behold, there are some correspondences from the  previous year between Thurzo and his wife where they discuss taking Elizabeth down. Not with this method, no, but they were clearly planning something.

As for Elizabeth's son-in-laws, who were also present when she was "caught in the act of murder" - just think about how much they would have benefited from her ruin and death. Some actually theorize that this whole ploy could have been their idea.

Elizabeth Báthory wasn't a warm and cuddly woman by any means. To be honest, I'm sure she was quite horrible, but in many ways, I feel like that's who she had to be. There were constant fights in Hungary, her husband was away a lot, thus the managing of the lands, tenants, estates and servants all fell on her.

As for the servants - it is 100% plausible that she mistreated them. However, according to authors Gábor Várkony and Tünde Lengyel who went through the records of the hearings, there were only 8 mysterious deaths surrounding Báthory in the years of the alleged murders. Given the health conditions of the time and the fact that the servants were likely beaten for any missteps, it can be said that that is not a significant number. Also, while this obviously doesn't make it okay, it wasn't to be frowned upon even if a lord beat his servants to death.

The question remains - who was Elizabeth Báthory? Was she guilty of countless murders, dealer of unthinkable horrors? Or was she a woman framed by a power-hungry and jealous man? We may never know for sure.

BUT YOU CAN AND SHOULD VOTE. So, after everything you've just read -


Was Elizabeth Báthory guilty of these crimes?

Email ThisBlogThis!Share to TwitterShare to FacebookShare to Pinterest
Labels Other posts, Spooky October