Would I Still Enjoy These Books I Loved Three Years Ago? Let's See! 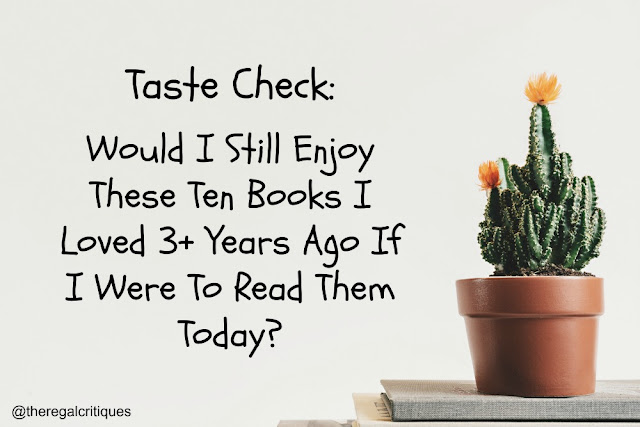 Hello everyone!! After a bit of thinking, I decided to put a small twist on today's Top Ten Tuesday (weekly meme hosted by The Broke and the Bookish) topic. First, as the topics suggests I will go back and write down the first ten books I reviewed on the blog that I rated 4 or 5 stars. I will tell you how I felt about these books, even share quotes from my reviews.

Step 2 - and this is the part that has me excited! - will be me telling y'all if I still feel the same way about these books or no. I mean, nostalgia is nice and all, but let's be honest, it is very likely that some of the books I gushed over around three years ago will make me cringe real hard today.


Wish You Were Dead
by Todd Strasser

"I absolutely loved this book, it was one of the most unique ones I've ever read."

BACK THEN: I had a pretty limited reading experience in the mystery genre back when I wrote my review for this, so me calling Wish You Were Dead, aka one of my first mystery novels ever, super-unique was rich. On a side note, in my review I kept saying how "realistic" the story was, which it really isn't?? I don't even know what made me think that.

NOW: I might still enjoy this one today?? I don't remember much of it, to be honest, but it was a very quick read and the reveal of the killer was shocking, yet it made sense. I'd probably rate it 3 or less stars.

Lila and Ethan: Forever and Always
by Jessica Sorensen

"I was rooting for them since their first encounter and in many ways I love them more than Ella and Micha."

BACK THEN: I was a HUGE fan of Sorensen's and I actually liked Lila and Ethan more than Ella and Micha, so this last short story about them was something I was really looking forward to. I rated it 5 stars, but I do remember feeling just a little let down by certain things.

NOW: I don't think I'd enjoy this series very much today. I grew to hate drama and this series is so full of relationship drama that it's unbelievable. That said, Lila and Ethan are still dear to my heart. They're just one of those couples that, despite their differences, work so well together.

Be With Me
by Jennifer L. Armentrout

"I liked this book a lot, still there were parts that were too much. Like the parts that were intended to be mysterious and suspenseful, but weren't well made enough and they didn't really fit into the story."

BACK THEN: As you can see from this and the previous book, this was my New Adult era, the first time I discovered NA novels, and I looooved them. The Wait for You series was one of my favorite series out there, and I was recommending it left and right.

NOW: Nothing has changed, really, I still love this series - albeit the last book WAS cringy as fuck - but I still recommend the series to those who are looking for good NA Romances.

"This book wasn't what I thought it would be, it was so much more. I loved every minute of reading it because it was sweet and had lovely characters."

BACK THEN: This book was HUGE around the time I picked it up, and it impressed me quite a bit. The romance was cute, I liked Fern and it felt different from other books I read before. But, to be honest, even then I had quite a few problems with the book, and what made me rate it 4 stars instead of 3 was likely the hype.

NOW: Gah, it gives me all the negative feelings, AND I CAN'T EVEN EXPLAIN WHY. No, it wasn't really bad, but the more time passes by, the worse it seems. Especially the romance is what bothers me, to be honest. It's like, Amrbose had to be scarred to realize that beauty is more than skin deep? And also, it is stated that Fern is "pretty" now, so would he even like he if she wasn't universally acknowledged as attractive? Meh.

The Coldest Girl in Coldtown
by Holly Black

"Considering everything I love this story even if there were definitely cliches in it and the characters weren't always likable."

BACK THEN: My first ever - and probably least favorite - Holly Black book. I really liked it, it was super-weird and unique, definitely stood out from other popular YA titles of the time, even if it was using the vampire trope.

NOW: I still love this, and would 100% love it if I were to pick it up for the first time now - maybe even more so than I did back then. I just adore how Holly Black is able to pick any topic that's been done before and make it incredibly special and outstanding.

"This book blew me away, it was captivating from the first page to the last."

BACK THEN: Still in my NA era, I read every single book Simone Elkeles had published, and this one was my last one, I believe. I liked it A LOT, but I didn't feel like it lived up to Perfect Chemistry, which was one of my favorite series at that time.

NOW: I don't know why I loved Elkeles's books so much?? They are okay, but nothing to be in love with, in my opinion, especially not this one. I never even ended up continuing this series, because the second book's pub date was pushed back various times and it didn't receive a ton of hype. (I don't only read hyped books, I swear! But the second book was basically just forgotten by everyone, at least me.)

These Broken Stars
by Meagan Spooner and Amy Kaufman

"(...) usually I hate sci-fi, but this completely blew me away with all the twists and cute parts. I’m still amazed and I’m really looking forward to the next book of the trilogy even if it won’t be about these two amazing characters."

BACK THEN: I really wasn't into Sci-Fi books at the time - I'm not truly a fan now either, but I like them more than back then - yet the hype for this was big enough to pull me in. I mean, Titanic on a spaceship, BUT WITH A HAPPY ENDING?? Gimmie. And I did love it, I could barely contain my excitement until the sequel.

NOW: I still love this series, and I still follow both author's books - the Illuminae Files (Kaufman) are fantastic, but so was Hunted (Spooner) - AND I can't wait for their new series that they are co-writing TOGETHER. The dream team is working together again! *flails*

Dorothy Must Die
by Danielle Paige

"This book blew my mind. It was so amazingly written and so different from the usual fantasies that I fell in love with it at the very beginning."

BACK THEN: I loved how dark this retelling was, and I really adored every single aspect - the characters, the romance, the plot, the world building. It was an easy 5 star read, and I couldn't possibly have been more pumped for the sequel.

NOW: Well, since then Danielle Paige went to my "no-thanks" list due to her support for Kathleen Hale. Just... no, please. Me not continuing the series for that reason turned out to be a very good thing, because most fans of the series were severely disappointed in the sequels.

The Catcher in the Rye
by J. D. Salinger

"I read the first page and was completely captivated."

BACK THEN: In 99% of the cases if you saw me with a classic in my hand, I was reading it for school. The Catcher in the Rye is one of the few classics I picked up on my own back then, the book that convinced me to give more classics a chance, because it was THAT good.

NOW: Still love it just as much as I did when I first read it!!


"Vera Nazarian created a very interesting story despite a weak start and she made all the characters come together {following their own subplots} without making it unbelievable."

BACK THEN: I struggled with this book, to tell you the truth. The writing style was hard to read and the story started very slowly. BUT I got really into the plot by the end of the novel, and was a fan of the overall atmosphere and characters.

NOW: I'm really not sure how I feel! There were so many details in this one that I can't recall, including most of the characters. *hides* But... I think I might like it today, as well? Maybe I wouldn't give it 4 stars, only 3, but I don't think I'd hate this.

What are some books you've read years ago, but still love just as much? Do you have any that you used to be a fan of, but now can't stand?

Leave me a link to your TTTs!