Books That Were HARD To Get Through 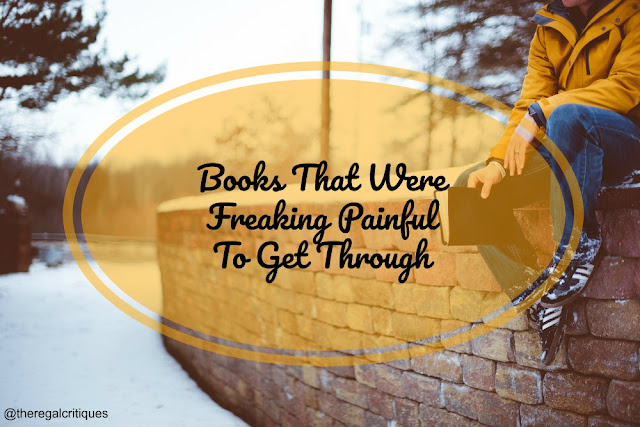 Hello darlings! Today the creators of Top Ten Tuesday (a weekly meme hosted by The Broke and the Bookish) presented a negative topic to us, and because I love to rant, I, obviously, loved making this list. I was actually surprised to see how easily I found ten books that were hard to get through, yet I finished them. Some of the books on this list showcase perfectly why I should DNF more.

Hold Back the Stars: The most boring and ridiculous Sci-Fi novel of ever, to be honest. Little to no explanation, annoying as fuck characters and less than perfect writing... Hold Back the Stars had very few redeeming qualities. See my review here.

Dark House: Godddd, the characters in this one were just AWFUL. I thought I'd get a shippy/cute romance, but the male lead - see how I'm not using the word 'hero' for him - actually has a girlfriend and will be together with her for multiple books and IS LEGIT NOT IN LOVE WITH HER AND IT'S HORRIBLE UGH. I did my research and oh my fucking god IT GETS WORSE in every book, basically... I don't want to tell you spoilers, so just... believe me or idk, try for yourself.

ALSO, the heroine is fat, and the fat-shaming gets REAL bad. She was legit told to her face by her future employer, no less (!!), that she doesn't look like someone who should be on camera and I'm just... there's so much wrong with that. IT IS CALLED OUT!!! (Sort of??) Buuut, I'm just not satisfied at all with the way she - or other women - were portrayed.

Hero: I LOOOOOOVE Samantha Young's On Dublin Street series so damn much (with the exception of one of the books, but psst), but this one was just so bland and boring, and the same can be said about the characters and the romance. What.A.Disappointment.

See What I Have Done: I've been fascinated with the Lizzie Borden case ever since I've first heard about it, and that only grew when I watched the television show about Lizzie Borden that takes place after the trial and in which she is basically a murdering goddess. The events surrounding the murders told by various characters, all of them somehow involved in the case, sounded very intriguing, but, alas, this book was a disappointment. The writing was... not my cup of tea, the characters weren't outstanding and they all seemed to have somewhat similar voices. All in all, DISAPPOINTMENT.

The Merciless III: Being a sort of prequel to the first Merciless book, this one sure as hell sounded like something I'd love. Buuut it was very bland, to tell you the truth. The way the story unfolded reminded me so much of the first book in many ways that I wanted to throw the book at the wall. WHYYYY do that when there was so much potential in Brooklyn's story!?

Happily Ever After: Okay, I loved Cinder & Ella! It was cute and fluffy and the characters were incredibly lovely and, to this day, are one of my OTPs. BUT!! This sequel was just painful. I did give it 3 stars, but I skimmed a lot of it, because the unnecessary drama THAT HAD BEEN SOLVED IN BOOK ONE (!!), was sooooooo annoying.

Night Swimming: I expected this one to be a cute/fun Contemporary with amazing characters, but I couldn't for the life of me get into the story. It was just so boring and had some parts that made me roll my eyes so much.

The Ghost of You and Me: Seems like Kelly Oram books of 2017 just fail to meet my expectations. Again, this was fine, but incredibly drama-filled at parts, while the characters were kind of meh. Also, it didn't have any truly unique or outstanding elements. Total skim-read.

A Gathering of Shadows: Please don't kill me, but I disliked AGoS SO MUCH. I wasn't impressed by the plot and the characters constantly got on my nerves, so yeah, this one was hard to get through. I ended up skimming through parts of it, tbh.

Take the Key and Lock Her Up: After two really cool books in the series, this finale was a terrible disappointment. So many things didn't make sense AT ALL, and the plot/pacing was all over the place.

What was the last book you had to fight to get through? Have you read any of my picks?
Written by: Veronika @ Wordy and Whimsical date: 06:00