Suspenseful, Riveting and Harrowing - After the Fire by Will Hill 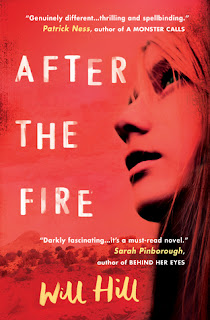 The things I’ve seen are burned into me, like scars that refuse to fade.

Moonbeam is starting to doubt, though. She’s starting to see the lies behind Father John’s words. She wants him to be found out.

What if the only way out of the darkness is to light a fire?

Received an ARC in exchange for an honest review by Usborne Publishing UK.

Inspired by a real-life American cult, After the Fire is a story of survival of a girl who has lost everything she was brought up to believe in as her world. Read on to see just why you must pick this gripping novel up as soon as possible!


"Bad and good, False and true: they're the opposite ends of a whole spectrum of behaviour, not the only two things a person can be. Because life just isn't that simple. People aren't that simple, even though I'm sure things would be a lot more straightforward if they were."

After the Fire takes inspiration from the Waco Seige (1993) and follows the story of a power-hungry man in the guise of a direct messenger of God who'd go to any means to ensure all things within the cult are under his control. Father John is believed to be a righteous man of faith, respected and feared by all. However, after years of being inside the Fence, Moonbeam has come to question everything around her, and finds herself in quite the dilemma when things happen that make her question her very faith. After a dreadful fire leads her to be placed under the care of the Government at a Municipal Centre, Moonbeam is made to relive her life inside the cult in the presence of her psychologist, Dr. Hernandez, and an FBI agent, Agent Carlyle. What follows is a riveting story of survival, acceptance and freedom.

While the storyline is gripping in itself, the author does himself proud by weaving together a suspenseful page-turner that wouldn't fail to keep you up reading late into the night- it certainly did me! While I took my time getting into the story (the first chapter was a tad slow), there was no turning back once Moonbeam got talking. I was hooked, and I kept turning the pages feverishly to know what would unfold. Told in alternating chapters between After the fire and Before, you can see the story literally unfolding before your very eyes- so fantastic is the writing. There were times when my skin crawled, there were times when I cringed and grimaced, and there were times when I was literally speechless.

Be it before the fire, inside the Fence, or after the fire, in the shelter, the world-building is just superb. It was incredibly captivating to see how life in the cult was, and some of the things described were downright disturbing. We see how Father John ruled everything along with his Centurions with an iron fist, and we see just how desperate and vulnerable the people inside were. From the barbed wire to the metal boxes, it was all just chilling to read about. In the shelter, we see how protected and cared for they all are- the difference couldn't be more profound.


"I look back, and I think, and I try to be strong. It's painful, because there was a time, a long time, when I believed every word Father John said. Before my mother was Banished, I believed in him, and in the Legion, with all my heart, and part of me misses - will always miss - the certainty that came with that, the power and the pride that came with being part of something that was right and True."

Moonbeam was a fantastic protagonist, and I loved how her character arc progressed. We see her go from a girl full of faith and belief to being full of doubt and fear, and we see how she learns to put everything behind her and grow as a person, slowly learning to trust those who rescued her. You can put yourself right in Moonbeam's shoes as she finds herself in a place she never imagined herself to be in, and as she tries to come to terms with what happened to her and her Brothers and Sister in the cult. You'd find yourself rooting for her, for them, until the very end. Apart from Moonbeam, I also loved reading about Dr. Hernandez and Agent Carlyle. They turned out to be incredibly supportive and caring, and I'm glad they were there for Moonbeam until the very end.

We are told in the author's note all about how this riveting book was inspired by a real-life American cult, and it's all just so chilling to think about. While going into this book I did know that, I was so not prepared for the journey it took me on. We see how one man's greed for power leads to corruption and destruction, and how he strives to achieve his own ends by twisting faiths and beliefs of many, come what may. We see what happens to the lives that are entangled in this, and knowing that something similar, something possibly worse, happens, did happen, in real life is at times too much to process. The realism is just so brilliantly realized and jolting.

My only complaint is that while the ending was quite very satisfying, I did feel we could have had a more drawn out one. The book felt overly long and repetitive at points, so the ending just felt all the more rushed. I also would have loved to explore Moonbeam's relationship with Honey, her fellow Sister in the Legion, and the same could be said of her relationship with her mother. Nevertheless, the book ended on a hopeful note, and I'm glad the author chose to wrap things up just so.

All said, After the Fire is a suspenseful, harrowing story of survival about a girl brought up within a cult, who's suddenly made to question everything she ever believed in. A must-read!