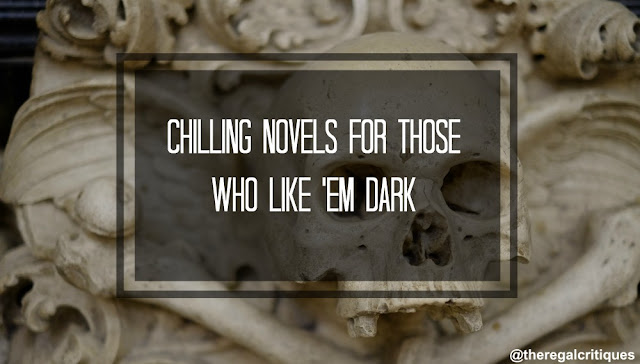 Hello everyone! I'm so so SO glad Top Ten Tuesday is back, because, as a lover of lists, I've been missing it so much. I broke my brain trying to think of a cool topic for today, something that maybe not a lot of people would be doing, and finally decided next to dark books with truly disturbed characters that will surely make you sit tight with nerves until - or even after - you finish the book.

Now, these aren't necessary horror novels, many are mysteries, but they all contain some dark shit, be that the characters or certain scenarios. I'll tell you in a few words why each is worth reading and even share some quotes to make you all really feel the dark, chilling atmosphere of these books.

My Sister Rosa by Justine Larbalestier

Rosa is this tiny, cute girl who fools literally 99% of the people she knows, so imagine being the one person who KNOWS that she's disturbed◀️

The Fall by Bethany Griffin

▶️ main character doesn't only lives in this creepy-ass place on her own, basically, but she and her family are cursed #nice

▶️ the atmosphere will have you shivering, because yeez, these people are creepy


“You were still as a statue, and yet you went higher than me. As if someone I couldn’t see was pushing you. It scared me, Madeline.”
The Fall

reveal of the killer is... woah◀️

Daughter Unto Devils by Amy Lukavics

▶️only people living somewhat nearby creep the MC out

▶️ MC is being haunted, but the rest of the family can't see anything


“I think you should be angry if you’re angry. But it’s also true that hate has a way of hurting you more than the person you’re hating.”
The Sacred Lies of Minnow Bly

The Sacred Lies of Minnow Bly by Stephanie Oakes

main character lived most of her life in a cult, lived through terrible things - many flashbacks ◀️

book takes place in prison, because she hurt really badly someone after escaping the cult ◀️

The Dead House by Dawn Kurtagich

▶️ two girls living in the same body, one comes out at night, one in the daylight - look at me rhyming

▶️ is this real or is the girl mentally ill?


“They think I don't exist . . . they think I'm like a disease. I'm infecting Carly.”
The Dead House

I Hunt Killers by Barry Lyga

main character was brought up by his serial killer father, thinking what he was doing was the norm ◀️

he is living a semi-normal life now, but shards of his childhood haunt him still◀️

Made for You by Melissa Marr

▶️ EVERYONE is suspicious

▶️ sick as hell POV of that person

“Best of an island is once you get there - you can't go any farther...you've come to the end of things...”
And Then There Were None

And Then There Were None by Agatha Christie

it can be ANY of them murdering them ◀️

the ending had me in shock ◀️

“Sometimes the loveliest places harbor the worst monsters.”
A Madness So Discreet

A Madness So Discreet by Mindy McGinnis

▶️ main character is taken to an asylum, because she fell pregnant, treated horribly there

▶️ even when she's taken to a better institution she still - understandably - isn't over what happened to her, some darkness remains

▶️ criminology used when it was not taken very seriously

she HAS TO earn money so she stays despite the strange Bordens... or the voices she hears◀️

▶️ creepy porcelain dolls that need to be locked up

▶️ everyone is... weird. who should she trust?? (there's someone she REALLY shouldn't)

In the Shadow of Blackbirds by Cat Winters

the boy the main character was/is in love with has passes away... what they know about his death doesn't add up, so she investigates  ◀️

one of the darkest mysteries of ever◀️

▶️ everyone knows this book, tbh

▶️ two sides to their story, WHICH ONE IS TRUE?


Have you read any of these novels? What did you think? What's your favorite novel or novels that you consider dark?

Leave a link to your TTTs!
Written by: Veronika @ Wordy and Whimsical date: 05:00