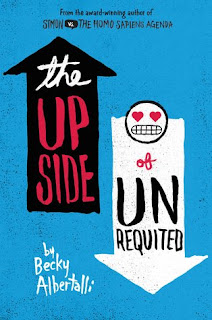 Seventeen-year-old Molly Peskin-Suso knows all about unrequited love—she’s lived through it twenty-six times. She crushes hard and crushes often, but always in secret. Because no matter how many times her twin sister, Cassie, tells her to woman up, Molly can’t stomach the idea of rejection. So she’s careful. Fat girls always have to be careful.

Then a cute new girl enters Cassie’s orbit, and for the first time ever, Molly’s cynical twin is a lovesick mess. Meanwhile, Molly’s totally not dying of loneliness—except for the part where she is. Luckily, Cassie’s new girlfriend comes with a cute hipster-boy sidekick. Will is funny and flirtatious and just might be perfect crush material. Maybe more than crush material. And if Molly can win him over, she’ll get her first kiss and she’ll get her twin back.

There’s only one problem: Molly’s coworker Reid. He’s an awkward Tolkien superfan with a season pass to the Ren Faire, and there’s absolutely no way Molly could fall for him. Right?

“I don’t entirely understand how anyone gets a boyfriend. Or a girlfriend. It just seems like the most impossible odds. You have to have a crush on the exact right person at the exact right moment. And they have to like you back. A perfect alignment of feelings and circumstances. It’s almost unfathomable that it happens as often as it does.”

The Upside of Unrequited was one of my most anticipated YA releases of 2017. Having read and loved the author's previous, Simon vs. the Homo Sapiens Agenda (barring a few things that didn't sit well with me, it was pretty much perfect), and having read nothing but the best things about this book beforehand, I was extremely pumped for this one. So, did it live it up to all my expectations, or didn't it? Let me list three reasons why I absolutely loved this book, and two reasons that stopped this being one of my absolute favoritest reads of the year!

This one absolutely takes the cake for diverse rep- there's a lot of diversity, be it in body size (the protagonist, Molly, is fat), mental health (she has a history of anxiety and is on medication for it), skin color (black side characters), sexuality and gender identity (pansexual, bisexual, lesbian, gay side characters to name some), religion (multiple Jewish characters)- I could go on. What's even more amazing is that the diversity extends to so many of the side characters in a very realistic manner; the everyday inclusion is a blessing, especially since we're used to either seeing a diverse main character with a couple of other diverse side characters thrown in or just the latter.

“...there's something really badass about truly, honestly not caring what people think about you.”

Be it Molly's relationship with her twin sister or that with her two moms, the relationships were all beautifully portrayed. I loved how they were extremely supportive of each other and how entwined their lives were. Sure, they had their fair share of conflicts, but I loved how they worked together to get through them and stay united in the face of any problem. Molly's moms were the coolest and unlike typical YA parents who are a shadow in the background, they had active roles in the story and I loved their involvement. Yay to healthy families!

There’s just something terrifying about admitting you like someone. In a way, it’s actually easier when there’s no chance of anything happening. But there’s this threshold where things suddenly become possible. And then your cards are on the table. And there you are, wanting, right out in the open.

This would come as no surprise to those of you who've read and loved the author's debut. The writing is just as brilliant here and paves the way for a quick read that would no doubt keep you glued to the pages till you finish the book. The cutesy romance was elevated by the beautiful writing and I'm all heart eyes for it. I loved the messages thrown in, and just as always, the writing struck a chord with me and made up for the other problems I had with the book.

Speaking of which, the two things that didn't quite sit well with me-

“Here’s what I would never, ever admit out loud: a part of me always thought it was some kind of secret compliment when someone got called a slut. It meant you were having sex. Which meant people wanted to have sex with you. Being a slut just meant you were normal. But I think maybe I’m wrong about that.”

Molly wasn't exactly an unlikable character, but she was sure difficult to like. This may stem from me being unable to relate to her, but I felt she was excessively whiny, and as happy as she seemed about her weight, it was quite disappointing to see her still seek validation from her crush and how much her self-esteem is linked to whether or not he reciprocates her feelings. It didn't feel like a very healthy message to put across, but considering that this does serve as a journey of self-realization for Molly and makes her all the more...realistic, so I suppose that's excusable? I still found it hard to like her and disliked being in her head, especially since she was quite judgmental herself.

This is my biggest problem with the book- so many of the conflicts could have been avoided/resolved had Molly just talked to the persons concerned? I get that she was anxious and it was only natural she felt unable to speak up to others but this shouldn't have been a problem when it was her sister we are talking about, especially a twin she was very close to up until then. I suppose this may differ from your point of view, but it just didn't sit well with me. Molly practically didn't say anything at all! It just became unbearable frustrating after a point.

All said, The Upside of Unrequited was an extremely enjoyable (despite the problems stated above), important book, and while it didn't live up to all my expectations, I still did love it even more than I did Simon, and that's definitely something! Recommended if you're a fan of contemporary and/or the author's previous book- just pick it up already!

“But you know, there’s an upside here. Because when you spend so much time just intensely wanting something, and then you actually get the thing? It’s magic.”