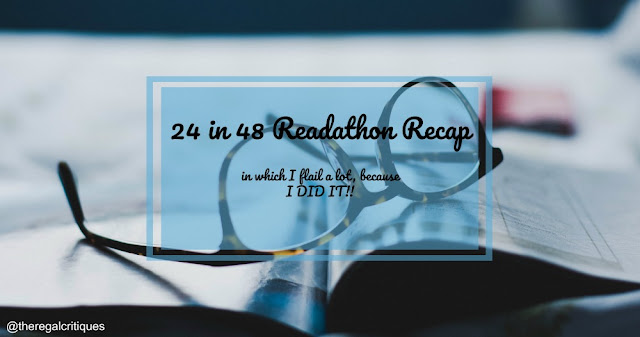 As a lot of you know this past weekend I took part in the 24 in 48 hours readathon which takes place twice a year and the goal is to read for 24 hours in 48 hours. AND I DID IT, I READ FOR 24+ HOURS!! I still can't believe that I was able to do that, because back when I was making my TBR post it seemed VERY hard, near impossible, to tell you the truth. I'm so satisfied and proud of myself right now.

Today, I'm here with a recap of the 9 books + 1 short story that I read this past weekend, and I'm very happy to say that most of these books were great. Even the two that I rated 3 stars were fairly enjoyable, so yay.

I started off easily with The Year of the Crocodile, a short story about Tina and Blake from Trade Me about the first time their families meet. I loved being back in Tina and Blake's head AND we also got Adam's (Blake's dad) point of view, which was a great addition. His character is a lot more layered than he seems at first glance, so the fact that he'll get his own book makes me really happy. Technically, this story takes place after Hold Me, but I was breaking all the rules of reading order. #badass
★★★★★

After that I jumped right into Hold Me, the second book in the Cyclone series, aka the sequel/companion (?) to Trade Me, but of course with different main characters, namely Maria and Jay. I adored this novel just as much as I did Trade Me, and I can't even tell you how freaking excited I am for the future novels in the series. I love how perfectly Courtney Milan includes diversity in her book, and how she is never afraid to show the flaws of her characters, particularly Jay's here.
★★★★★

Next I picked up Moxie, aka one of my most anticipated novels of 2017, because a) I ADORE Jennifer Mathieu, and b) Moxie is all about feminism and girl power. I had some concerns before picking it up, but thankfully I had nothing to fear, Moxie is a powerful book that I hope will push people to find their voices, join forces and fight for equality.
★★★★★

After all the contemporary novels I felt ready to dive into The Turn of the Screw, which I was told is a twisted, dark novel that will fuck with your mind. And yes, it was exactly that. I really loved the atmosphere and the writing, yet my thirst for answers that were never given was so strong that I only later raised my rating to four stars from three stars. A fantastic novel, but if you definitely need answers to questions raised in a book then perhaps not for you.
★★★★

Following that I was ready for more darkness, which I hoped I'd find in The Merciless III, prequel to The Merciless I, about a character who seemed super-intriguing in the previous two novels. Well, I was vastly disappointed. The goriness and darkness was good, but I was sad to see that we basically followed the same pattern as the first book, an innocent girl making bad decision on top of bad decision and then becoming evil. This has gotten old very quickly.
★★★

To cure my disappointment I reached for a novel that I was sure I'd enjoy, because I've come to love Lisa Kleypas this year and the Wallflowers series is fantastic. Scandal in Spring was exactly what I needed - it was delightful and funny, full of amazing characters and an adorable romance.
★★★★

Upon Sunday morning I was ready for something darker again, so I picked up Girlhood. To tell you the truth, it didn't exactly live up to my expectations, but it was still a very good book, albeit I wanted to slap some sense into the main character at various parts. I loved the dynamics between these four girls and I especially adored the friendship between Rowan and the main character.
★★★★

At this point I was a bit fed up with Contemporary again, so I decided to read An Extraordinary Union by Alyssa Cole, about a freed slave who becomes a spy during the Civil War. This book, people, this book was fantastic. I did take away one star from my rating, but that may have been due to me being all cranky and tired by this time... to be honest, I was fed up with reading itself at this point. I KNOW, THE HORROR. But, thankfully, An Extraordinary Union was so good that it brought me out of this mood. I definitely plan to come back to this novel and reread it one day, so then I may raise my rating, and I'm very excited for the sequel, as well.
★★★★

An Extraordinary Union left me wanting more Historical Fiction, so I picked up See What I Have Done, a story about Lizzie Borden, recounted by various characters who were somehow connected to the murders. While this was pretty okay, it didn't live up to my expectations in the least. A lot of research went into it obviously, but the writing was all over the place, and the characters didn't exactly have unique voices.
★★★

My final read was A Wallflower Christmas by Lisa Kleypas, because I only needed around an hour to finish the 24 hours and I was so tired by this time that I just wanted a short, easy-read that I'd likely enjoy. Also, I aim to be season-appropriate at all times, obviously. This novel was exactly what I needed, it was fun, adorable and totally put me in the Christmas mood, which is PROBABLY not the best thing in the middle of summer. Oops?
★★★★

Overall, I think this readathon was a pleasant surprise for me. Sure, there were a couple of moments where I wasn't that much into it, but mostly I really enjoyed everything and I'll 100% consider participating in the next readathon depending on my mood. Right now I'm VERY overwhelmed, but half a year from now I probably won't be.

Have you participated? If yes, did you completed your goal? What books have you read for the readathon/lately? Have you read any of the books mentioned above?

Email ThisBlogThis!Share to TwitterShare to FacebookShare to Pinterest
Labels Other posts, Readathon, Recaps