Vicki Covington - Once in a Blue Moon 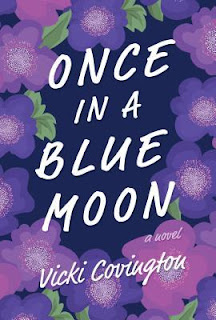 In Once in a Blue Moon, Vicki Covington’s new novel set during Barack Obama’s first presidential campaign, change is in the air.

Readers follow a diverse community of renters in Southside Birmingham through one transformative year. Abraham Kasir has properties scattered across Birmingham, but the ones on Cullom Street hold a special place in his heart. So does his newest tenant, Landon Cooper, a transplant from one of the city’s ritzier suburbs.

Landon’s a psychologist managing her own mental illness in the face of divorce and downsizing. Her upstairs neighbor, Abi, is a country girl trying to shake her rural roots even as her father’s illness pulls her back home. Across the street, Jet is a former prostitute reeling from an uncovered truth about her birth mother. Jet has a crush on her neighbor Sam, a weed dealer paying his way through college and wrestling with his dreams for the future.

Mr. Kasir acts not just as a landlord but as a father figure to each of them—and most of all to his grandson, Jason. Fresh out of high school, Jason is trying to follow in his grandfather’s footsteps while his own father struggles with drug addiction.

In league with other great Southern novelists including Anne Tyler and Fannie Flagg, Covington writes with tenderness and humor while asking important questions about family, faith, race, class, and—ultimately—hope.

Many thanks to the publisher & Edelweiss for providing me with an e-ARC in exchange for an honest review.

In Once in a Blue Moon, we follow an extremely diverse set of characters in the Southside community of Birmingham during the time of Barack Obama's first presidential campaign. Needless to say, this is one hugely transformative year, and we see, through the eyes of various characters, how the possibility of change of this magnitude may affect their lives.

Abraham Kasir has properties all over Birmingham, but it's those on Cullom Street that he holds dear. Landon Cooper is a psychologist who's coping with her own struggles- mental illness, divorce and downsizing among others. She's Mr. Kasir's latest tenant and she eventually goes on to hold her own special place in his heart- the reasons may surprise you. There are many such instances in this book, where characters reveal a side of themselves you may least expect. This is a very much character-driven book, and that works wonders for the story.

Apart from Landon and Mr. Kasir, we get Abi who's pulling away from the clutches of her life back at home and her father struggling with his illness; Jet, a former prostitute struggling to deal with the revelation of her true birth mother; Sam, a weed dealer with a golden heart and hopes for a better future; and Jason, Mr. Kasir's grandson who's trying hard to build a life for himself even as his father, a drug addict, poses trouble for him. The characters, as you can see, are truly diverse and the author does a stellar job in making us get involved in their lives.

This is the kind of book that you may label "slow", but while slow books generally tend to make me lose my train of thought, this one did nothing of that sort. If anything, the slow treatment actually was for the better here. You are introduced to the characters but they take their own sweet time in revealing themselves fully. You get engrossed in their lives and get lost in their individual problems. You see how beautifully their lives entangle and get immersed in their stories, and it's all dealt with very beautifully.

If the author's writing can be summed up in one word, it would be "charming". The characters are quirky, eccentric and so, so real- they could be virtually anyone you'd meet in real life, and they each offer a poignant look at life itself. We don't just see things from different points of view, we practically take up residence with the characters in their neighbourhood, watch them muddle their way through life and finally walk away feeling as if we are saying goodbye to some very old friends. The writing is just beautiful.

In conclusion, this is a lovely book all about accepting change, self-discovery and dealing with whatever life throws at you, and I'd highly, highly recommend that you pick it up!