Royal Rantings: Here's How You Write a Problematic AF Book 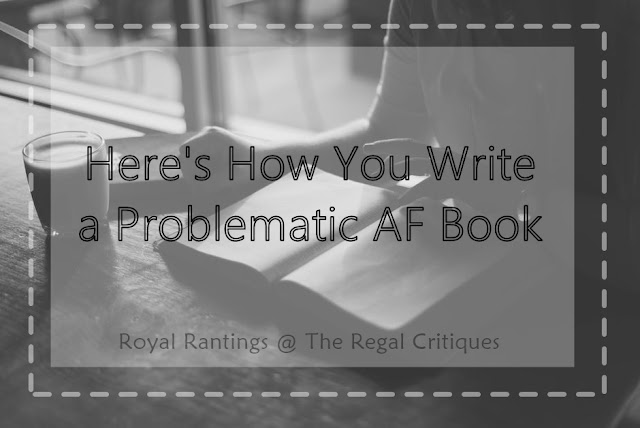 I recently had the absolute privilege of reading what must be the most problematic (read racist, Islamophobic) pile of shit ever. It certainly is the most appalling book I ever came across, and I knew I just couldn't review it without tearing it to pieces, and I told the author as much- I got it for review even after stating that I was Muslim which somehow makes it all the more terrible. I could have easily DNF-ed it, but I kept waiting for it to redeem itself at least a little bit, and part of me was just morbidly curious as to how things would turn out. Spoiler: not so great.

What made the author think I would enjoy something like it I'll never know, but today I'm here to help you through writing a problematic af book- with excerpts from the very book I was talking about. I need this- catharsis or whatever you call it, I just need to get it all out of my system after keeping silent about it for so long.

I'll just be listing down all the things I can think of, in no particular order. Follow just a couple of this (in case one is too mainstream) and you're good.

1. Have a supposedly MLK-like figure spout all our nonsense.

That way readers will be confused as to if he's right or wrong. He's someone like Martin Luther King, Jr., you say, so can he be wrong? You have it easy now- you can make him speak the most ridiculous things ever and no one bats an eye:


"There was a time in the not-so-distant past when Black Lives did not matter. Those times, mercifully, are behind us in America. Today, the Black Lives Matter movement preaches a false and disingenuous narrative."

2. Blur the line between fiction and real life.

Have tiny and not-so-tiny incidents happen that make the reader question what happens in real life. It's your book after all! You can go all out with your imagination, who's to say you can't?


"At Customs & Border Chantal sailed through without incident while Luke was selected for secondary screening and questioned intensively. They suspected he was going to the States for work."

Guess who's the black character here? Wrong. It's Chantal. She sailed through without incident.

3. Repeatedly bash the Black Lives Matter movement and undermine everything they've been fighting for all this while.

You think BLM is a farce? Write a book about it, throw it at unsuspecting readers, flaunt your privilege! And better still, have that MLK-like figure say what you want to:


"To Black Lives Matter- Change everything. Your approach is flawed. When your starting position is: it's not up to us to make space for Whites or articulate a vision for Whites, you start with division. You alienate all but the most liberal Whites, though granted, there are many of those."

4. Personal political opinions? Squeeze them into your narrative whenever possible!

Trump? Racist? Please. He's only giving us "a taste of true democracy where candidates speak from the gut and heart." He's spouting "epic common sense" and screw you for not noticing it.

"Obama weighed in and said little to deter Geroy's plans: "Let me be perfectly clear," he started, and went on to be absurdly vague and unclear. He didn't condemn or condone. He rambled, concluding with: "We have to see how this plays out."

Justin Trudeau spoke at length about hockey's place in Canadian society, but was otherwise milquetoast critical. We live in interesting times, he cryptically concluded."

It doesn't matter if you're writing fiction! Make real life characters speak and act the way your rich and convoluted imagination wants them to. Ridicule them. It is, after all, your book.

A bit of context here before the excerpt- this is a documentation of the MLK-like character's speech in the book, given in the narrative itself:


"To Asians: Keep doing what you're doing. You guys rock. Except if you're Muslim.

This one was totally made up by the author. Because Wilbur rarely referenced Asians, the author assumed, correctly, that Wilbur lauded their behaviour.

To Religious Zealots of All Sects: Join the modern world. The Middle Ages had merit, but the 21st century's superior. By all means say yes to spirituality. Say yes to a higher power. But don't let ancient fables and their inherent barbarism be your guiding force. One more thing: stop treating women like a lower lifeform."

See what he did there? Gave an explanation to why Asians were mentioned, but nothing about Muslims because Muslims don't "rock", hey! And that closely followed by that bullshit about religious zealots? Islamophobic or not? I'll let you decide for yourself.

And if all this is not enough, go for the age-old technique: Be blatantly misogynistic.


"Luke offered to do the dishes, as he always did, but Maynard put his foot down. That's women's work, he bellowed joyfully."

And in case you're wondering, darling Luke didn't contradict. The women ended up doing the dishes themselves.

Writing a problematic af book is this simple.
Have any more pointers? Share with me in the comments below!

P. S. The hugest shoutout to Vera for being the most patient listener ever and for helping me struggle my way through this.

P. P.S. I initially didn't really want to bring any attention to the book and risk it getting the limelight and have more people read it, but it wouldn't be fair if I don't at least warn you so you can steer clear away from it. Well. So here goes nothing: Johnny and Jamaal by K. M. Breakey.
Written by: Ruzaika @ Wordy & Whimsical date: 05:30