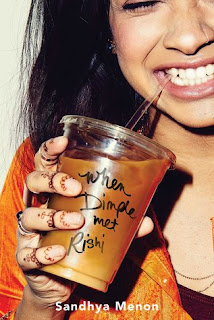 A laugh-out-loud, heartfelt YA romantic comedy, told in alternating perspectives, about two Indian-American teens whose parents have arranged for them to be married.

Many thanks to the publisher and the publicist of the author for sending an e-galley via Edelweiss.

Dimple Shah's sole interest lies in coding, whereas her mother would rather she grew out her hair, slapped on some makeup and got married already. So when her parents agree to send her away for a summer web developers competition, Dimple knows better than to question her good luck. Little does she know that the very reason she's being allowed to go there is because a certain Rishi Patel would be attending it too and she was being set up for an arranged marriage. The best thing about it all? Dimple was the only one not in the know about all this!

The story takes off with Dimple meeting Rishi, and Rishi saying "Hello future wife, I can't wait to get started on the rest of our lives." Mortified? I was, though I couldn't help but double over laughing (you'll soon see that ths is the case all throughout for most parts of the book). In all defense, Rishi did mean it mostly as a joke, but as Dimple had no clue about any of this whatsoever, she does what any of us would do at that point- she chucks her iced coffee at him and runs away.

I don't remember exactly when I came across this book, but I do remember feeling incredibly excited about it- Indian American MCs, arranged marriage, lots of potential for Bollywood touches all throughout? I was practically drooling over the prospect of this book already when I managed to snag an eARC. I was a little apprehensive, as I'm wont to be when I have high hopes pinned on a book, but I need not have worried at all because Sandhya Menon takes a tried and tested template and gives it an all-new spin in this delightful desi love story.

The book's positive take on arranged marriages must definitely be lauded. Contrary to popular opinion, arranged marriages aren't forced, dreary proposals all negotitated between parents and elders with all the potential of bringing the least happiness. I wouldn't say it doesn't happen, but it isn't the norm either, and the author did a great job in portraying this in the book. In spite of Dimple's and Rishi's parents initiating the talks, what follows is solely due to their individual wishes and choices.

The characters are all amazing, from Dimple's mom to Dimple herself, from Rishi's brother to Rishi himself, they were all multifaceted and very interesting people- hat tip (shawl flick?) to the author on that. Dimple was fiery and independent, and just my kinda heroine. Marriage is the last thing on her mind and kismet or not, she wouldn't let anything come in the way of achieving her dreams and I just loved that about her.

Rishi was all kinds of adorable and is the perfect book boyfriend. I loved how he was the more romantic one of the two and his character arc was brilliantly done. The struggles he faces in trying to be a good son to his parents while being true to himself were very well-portrayed and definitely a highlight of the book, and so was his relationship with his brother which I felt was dealt with very well.

Infused with humour, the writing is flawless. I immediately took to the authors style and the Hindi words sprinkled here and there only added to the beauty of it all. I loved the various references to Bollywood movies for once, and I was one happy cookie seeing the author whip up a brilliant YA rendition of a Bollywood romcom- you get the whole package, right from the conventional parental expectations to the whole dramatic climax. The author managed to surprise me more than once and I'm thankful for that- like the potential airport ending which was cleverly deflected.

When Dimple Met Rishi is a book you simply cannot afford to miss if you're a fan of contemporary romance, and I'd never tire of recommending this fabulously adorable YA desi romance. Pick this up for one hell of a terrific Bollywood ride!