Geraldine McCaughrean - Where the World Ends

“After the world ends, only music and love will survive.” 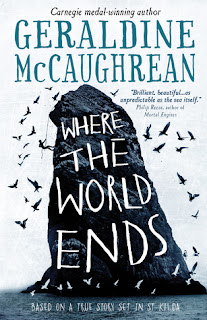 Every time a lad came fowling on the St Kilda stacs, he went home less of a boy and more of a man. If he went home at all, that is...

In the summer of 1727, a group of men and boys are put ashore on a remote sea stac to harvest birds for food. No one returns to collect them. Why? Surely nothing but the end of the world can explain why they have been abandoned to endure storms, starvation and terror. And how can they survive, housed in stone and imprisoned on every side by the ocean?

Received with many thanks from the publisher in exchange for an honest review.

Nine boys and three men from Hirta find themselves marooned on the Warrior Stac on the summer of 1727. They had been sent there for fowling, but for some reason or the other, the boat that was supposed to fetch them back home never came for them, and they are left to fend for themselves in this remote sea stac which is home to nothing but birds. What could be the reason for everyone forgetting all about them? A week passes, then two... but on seeing no sign of anyone returning for them, they reach at the conclusion that the world must have ended. Surely no one would forget them unless something so inevitable happened, would they?

And so they struggle to survive on this godforsaken sea stac. It's easier said than done, though. Imagine being put ashore on a remote sea stac with nothing but the clothes on your back, with no clue as to when anyone would come back for you- if at all? And with the passing of time, winter comes upon them all too soon, and they have to really struggle against all odds to keep surviving. No birds around for food, no proper clothing, and the harsh cold always pervading their spaces, they are all in the worst imaginable situation, and this story shows us how they keep battling against all odds, come what may.

"They were turning into birds. they kept moon time. No more calendars. They measured the passing of time in months, by the wax and wane of the moon: each moon-month, the blink of an eye.

Their clothes were bird-skin and down. their legs, mangled by scurvy, were mottled and yellow and crusted. They lived in the Present: the Past was past mattering, the Future a shapeless improbability. And yet, they had come this far: why should they not persist? - spring, summer, autumn, Dead Time."

This story had all the potential to go all dreary and grey, but the author should be lauded for keeping things...exciting isn't the word I'm looking for, though strangely exciting it was, but going. The author kept things going somehow, and how original it all was! What I could first imagine was a long stretch of blankness- what could they possibly do on that remote sea stac? Things were certainly all too gloomy for those marooned, but the author kept the surprises and twists coming, and the characters were all so unique in their own way that never once did I feel like putting the book down.

I took my time getting used to the writing, which is more me, not the writing it self, but the characters more than made up for it. Be it Quillam with his never ending stories, John's surprises, Mr Farris and his inner battles, "Minister" Cane's antics or Kenneth's bullying- everyone was brilliantly fletched out and portrayed. Murdo was especially delightful, and his exchanges with Quill were a scream-

“So if you love a lassie,does that make her your sweetheart? D’you not have to – you know – have prospects?”

“Nah, man.Once you have her inside your head,that’s like you’ve put a wall round a cow,so the cow canna wander off.She’s your cow ‘cos you built a wall round her”

And then there was poor little Davie, the pious Euan who was "married" to God and the extremely unlucky Niall. Would it be weird if I say one of the "characters" I felt the most for was a garefowl? I kid you not, I loved its part in the book and it's hands down one of my favourites.

I could go on and on about this book, but in all honesty you should just read this for yourself to see what a great job the author has done in portraying the everyday difficulties faced by those at St Kilda, and by those who were marooned on the Warrior Stac that fateful summer of 1727. What makes all this even more awe-inspiring is that it's based off a true story!

I loved the ending, and it brought along a very welcome surprise of its own which I was very thankful for! Where the World Ends is a hopeful story about people thrown together in the most hopeless of situations- the author deserves all the praise in weaving together a riveting story, that in all its darkness, shines through with hope.