5 Reasons to Read Being Miss Nobody by Tamsin Winters 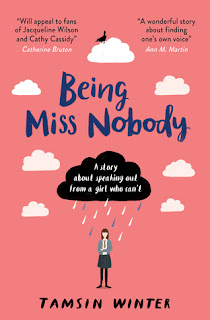 Rosalind hates her new secondary school. She's the weird girl who doesn't talk. The Mute-ant. And it's easy to pick on someone who can't fight back. So Rosalind starts a blog - Miss Nobody; a place to speak up, a place where she has a voice. But there's a problem...

Is Miss Nobody becoming a bully herself?

Received with many thanks from Usborne Publishing UK in exchange for an honest review.

I'm a sucker for books that deal with mental illness, and when I realized that this book would tackle Selective Mutism, a complex childhood anxiety disorder, I was instantly intrigued. That combined with blogging and bullying where the bullied might eventually resort to bullying herself? This gif was me:

I'm incredibly pleased to inform you that Being Miss Nobody lived up to all my expectations. The author did a great job in portraying the crippling anxiety Rosalind experiences and how she deals with it on a daily basis, and from what I know of SM, this book dealt with it really, really well.

Rosalind Banks has been- in her own words- Officially Weird since she was nine, but she has actually had SM since forever. There are times when the words in her head Disappear Completely, and then there are times when they get into a Massive Muddle, or sometimes she knows exactly what needs to be said but the words get stuck somewhere and she just can't get them out.

What happens when your doctor thinks its a good idea to change send you to a new secondary school when you're already suffering from the hugest anxiety? Rosalind ends up being a victim of bullying at school, and she eventually starts an anonymous blog (with the help of her little brother) to start speaking up about everything she can't in real life. What happens when you have infinite power under the guise of anonymity on social media, and what are its consequences? The author beautifully portrays this through the book, while also dealing with loss, grief and learning to speak up when it's most important.

Books that depict positive attitudes towards therapy are few and far in between, and therefore it's always a pleasant surprise to stumble upon such gems.

"There wasn't an Awkward Silence like there used to be with Dr Peak Not Peek and the room felt safe because she didn't have a grey recording box, or ask me any questions, so I knew for sure she meant it when she said I didn't have to speak, which isn't what therapy used to feel like."

This book shows us both sides of the coin- how the wrong kind of therapy and therapist can be more harm than help, and how the right one can do worlds of good for you. I loved Octavia and thought she was wonderfully portrayed.

Rozzie was a lovely, strong 11-year-old, and her character arc was brilliantly etched. We see how she takes baby steps in dealing with her anxiety, and towards the end especially, we see her learn and grow tremendously from her mistakes. I loved seeing everything unfold through her eyes, and immediately took to her voice.

"It was A Disaster On Practically A Global Scale. I could not imagine anything worse than being in the hall in front of everyone not being able to speak about the sugar concentration in orange juice."

You laugh, you smile, and you cry with Rosalind, and that, truly, is the author's success.

Right from Rosalind and her neighbour Mrs Quinney, to Rosalind and her brand new friend Ailsa, there are a many fantastic relationships portrayed throughout the course of the story. Rosalind goes from being tentative around them to being very close, and it was truly heartwarming to see the progress she makes with various people. My most favorite out of all was the relationship between Rozzie and her little brother, Super Seb.

"Just pretend you're a superhero like Batgirl and the library lady is The Target. Only instead of punching her brains out, you have to speak to her. And once you've done it you've saved the entire school from her evil plan."

Diagnosed with "poo-kaemia" and weirdly obsessed with poo and pharaohs and dinosaurs, he was always, always there for Rosalind, and she for him. Their exchanges were one of my most favorite parts of the books, and when eventually bad turns to worse, I was left tearing up.

This was hands down one of the best brother-sister relationships ever and that's reason enough for you to pick this book up!

A heartwarming (and a little heartbreaking) story about a brave 11-year old who learns the importance of speaking up, even when it feels like you'd rather face-plant a buffet. This is a must-read!