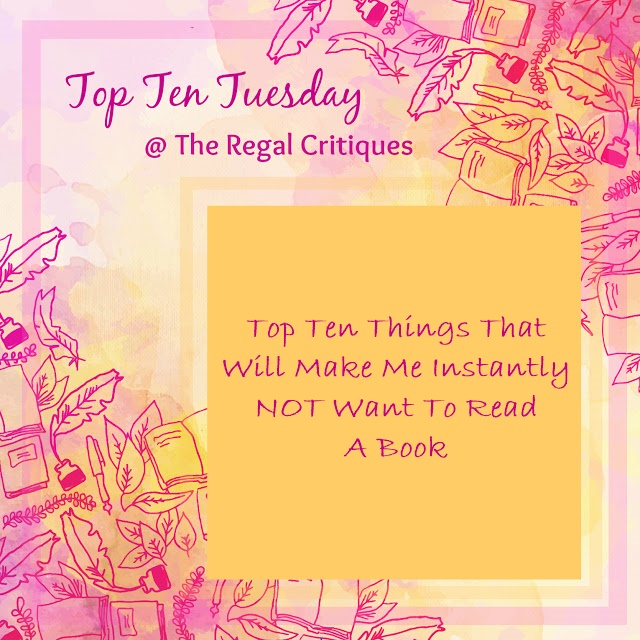 If you regularly participate in Top Ten Tuesday (weekly meme hosted by The Broke and the Bookish), or just like to check out other people's posts, you likely know that today's topic - stuff that will make us turn away from a book fast as hell - is the exact opposite of last week's. If you've seen that post of mine, you saw (and hopefully liked) how I mentioned two books that I picked up exactly for that reason. I'm not doing that today, because the books I could bring up for some of these categories don't deserve to be promoted. At all.


When reading my post, some of you might wonder how do I know about all those things without reading the book itself? Thanks to all the kickass bloggers' review in the community - SO THANK YOU EVERYONE for your insightful thoughts. KEEP ON BEING AWESOME.

Please don't forget that everyone has the right to decide against reading a book based on anything (blurb, reviews, quotes) AND sharing that with the world, telling their reasons.

There can be many reasons, to be honest. Here are two examples, but isn't limited to these: being called out on issues in their books and then failing to acknowledge them, or attacking/targeting reviewers who didn't like their works.

I'm mostly okay with longer series if all or most of their books have already been published. But when there's a 10 books long series and the first or second book has just been published? I'm more likely than not passing that up.

We have enough discrimination, negativity and hatred in real life - NO ONE needs that shit to be promoted in books, much less in YA that is read by many-many teens. These problematic representations don't only justify this kind of behavior or teach the wrong things to people, BUT they also have the power to seriously hurt readers.

HALF-NAKED MALES ON THE COVERS

I don't want to carry those around, to be honest, and that's enough to be turned away from some books.

Gah, give me a break - many teens already suffer from low self-confidence without seeing men or women mistreat their love interests without consequences. Anger-management issues are NOT sexy neither are partners who try to control your life. JUST STAAPH WITH THIS BULLSHIT, AUTHORS.

On a side note: interesting thing is that you don't see many or any controlling, aggressive women in fiction... soooo, it's only "hot" with guys?

TOO MUCH UNNECESSARY DRAMA

It's boooring - I want a real plot, I want character development, I want world-building, I want fantastic romance, I want friendship, FAMILY - I want SO MANY THINGS, and UNNECESSARY drama? Not on the list.

Book blurbs are EVERYTHING - sure, covers matter a lot, but a cover can be as inviting as a chocolate cake, yet, I still won't pick it up if the blurb sucks. Some are too long, some are too vague and forgettable, meanwhile, others tell too much of the story, or are confusing. You bet your ass I'm not picking a book up that has a blurb that managed to confuse the hell out of me.

I mean, if there's a good reason why the characters can't tell each other something (as in a Fantasy novel, for one) that's fine. BUT WHEN THEY NEED ONLY TO OPEN THEIR MOUTHS TO SOLVE EVERYTHING. Give me a break.

Why on Earth is this STILL a popular trope?? It's so so SO over-dramatic and, worst of all, many authors seem to think that adding a love triangle = adding depth to the plot and characters. NO NO NO. Can we just leave this trope behind??

I'm not a writing snob, believe me, but truly weak and inconsistent writing will make me drop any book after like, a chapter. And if I see quotes taken out from a book that seem to be written in a... less than perfect way? Not picking that book up, nuh-huh.


WHAT WILL MAKE YOU INSTANTLY TURN AWAY FROM A BOOK? ANYTHING WE HAVE IN COMMON?? SHARE, SHARE!!