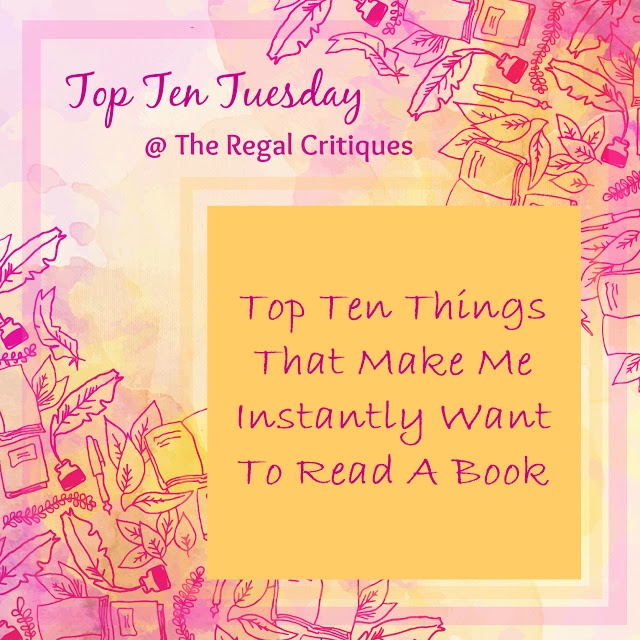 Okay, you guys, today's Top Ten Tuesday (weekly meme hosted by The Broke and the Bookish) topic? One of the most interesting and coolest ones I've ever done, so I'm EXCITED. I'm not 1000% sure how others are crafting their lists, but I'm going to share with you ten things that make want to pick up a book instantly, which is not to say that I'll actually pick up these books.

Instead of going into a long explanation about why I'm attracted to these things in books, I'm going to share with you two examples in each category that I picked up for that very reason and that I loved. All the books listed are 4 and 5 star reads, so they come highly recommended. READ THEM.

The reasons are in no particular order.

WRITTEN BY A POPULAR AUTHOR I HAVE NOT TRIED YET

EACH BOOK OF A SERIES FEATURES NEW MAIN CHARACTER(S)

HAS BELOVED SHIPS I'VE SEEN AROUND THE COMMUNITY

WRITTEN BY ONE OF MY FAVE AUTHORS

SET OUTSIDE THE US

HAVE YOU READ ANY OF THESE NOVELS? AREN'T THEY FANTASTIC?? LET'S FANGIRL/FANBOY TOGETHER!
WHAT THINGS MAKE YOU IMMEDIATELY WANT TO READ A BOOK? SHARE!