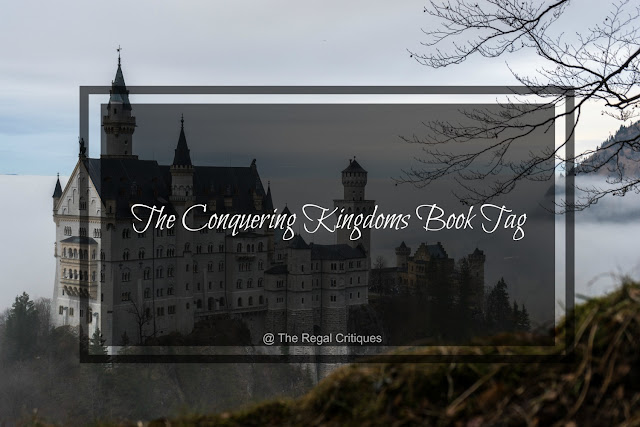 Hello guys! Today - courtesy of Clare from Dual Reads, who told me she'd be interested in my answers - I'm doing the Conquering Kingdoms Book Tag. This tag is styled after The Falling Kingdoms series, which I've never read, if you're wondering, BUT THE QUESTIONS ARE TOO COOL TO PASS ON. So, here I am. Hope you'll enjoy.


1) In Mytica there are constant betrayals and you can't trust anyone! Which book character would you trust to be your sidekick on this adventure?

That's an incredibly hard question! Most characters who come to my mind, I would either not trust, or they are just not the sidekick material, if you know what I mean. Okay, I have it. She's not a fantasy character, but she's quite vengeful and vicious, so I think we'd make a great team - Jane Steele from Jane Steele by Lindsay Faye. Now, Jane is not afraid to take action into her hands, and she'd do literally anything to protect and to help those she loves. PERFECT PARTNER IN CRIME.

2) You will come across many who want you dead in Mytica, so you need to be ready to fight! What kind of warrior are you?

This is just pure, wishful thinking on my part, because I can't even do a proper push up (awkward, I know), but I'd like to be a warrior that's good with lots of weapons. I mean, how incredibly cool it is in movies or books when a character knows their way with various weapons, and can protect themselves with whatever is at hand. I mean, Katniss's arrows were really amazing, but... what if she needs to fight with someone who is close by? Better to be a pro in more than one method of fighting.

The world of the Lunar Chronicles. I'd love to be the Lunar Queen, because WHAT A COOL TITLE. Asgard also seems like a cool place to conquer. So either will do.

4) Which fictional character would you like to rule by your side?

This is way too easy, you guys. Maxon from The Selection, because he's so damn cute I can't even. Also, he seems to want the best for his people and is ready for revolutionary ideas, which is something that Luna would need.

5) Who would you throw in the dungeon?

Kilorn from Red Queen, because he's so damn annoying and freaking useless. I swear to god, the story would work just fine without him constantly being jealous and an idiot and utterly childish. NO ONE NEEDS KILORN.

6) Who gets stabbed in the back?

This was another hard one to decide, because most characters I truly hate, I don't want to stab in the back. I WANT TO LOOK INTO THEIR EYES AS THEY DIE. But here's this one character from The Diabolic, the mother of the emperor, grandmother of Tyrus, who wanted to know AND control everything. Not knowing who stabbed her in the back while she's bleeding to death, would certainly provide another layer of hurt for her.

WHAT ARE YOUR ANSWERS TO THESE QUESTIONS?
ALSO, FAVORITE HIGH FANTASY BOOK OR SERIES?