Top Ten Most Unputdownable Books of, Well, Ever 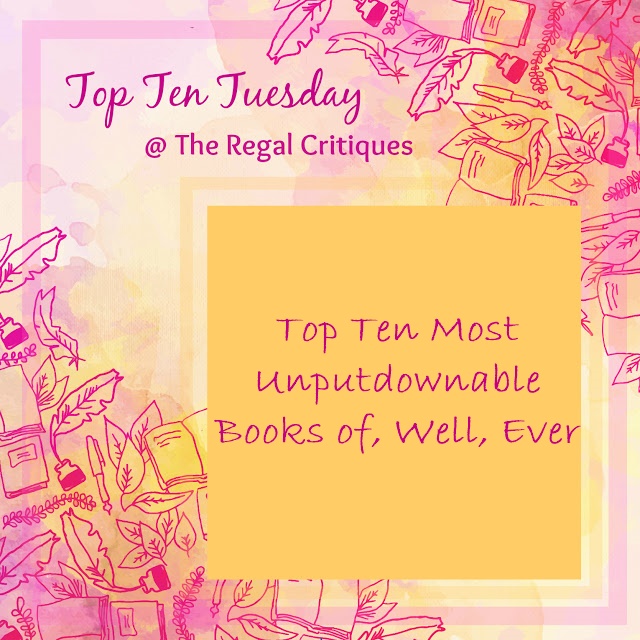 Hello everyone! I'm really pumped for today's Top Ten Tuesday (a weekly meme hosted by The Broke and the Bookish) topic, because it's all about short and/or quick reads. I'm always on the look out for such novels, as they are immensely helpful when I feel like I'm going into or coming out of a reading slump. So much so that a few weeks ago I wrote post about short as heck novels that will help you get out of a reading slump. And the best thing about that post? All those books are less than 300 pages long, SO YAY, they're truly short as heck. CHECK IT OUT HERE. End of promo, for sure.

So, as I've already done something concerning short books, I'm going to scream about ten books that were totally unputdownable - I mean, I may not have read all these novels in one seat, because #reality (meh) forced me to take breaks, BUT they are books that I definitely WANTED to read in one seat. SO, they totally count, okay?


Let me introduce you some the most unputdownable books of EVER.

My picks are in NO particular order! Click on the covers to head over to the novels' Goodreads pages.

IN THE SHADOW OF BLACKBIRDS
by Cat Winters

SIMON VS. THE HOMO SAPIENS AGENDA
by Becky Albertalli


AN ANQUIRY INTO LOVE AND DEATH
by Simone St. James


THE DIABOLIC
by S. J. Kincaid


WHAT ARE THE MOST UNPUTDOWNABLE BOOKS IN YOUR OPINION?
LEAVE A LINK TO YOUR TTTs!
Written by: Veronika @ Wordy and Whimsical date: 05:00