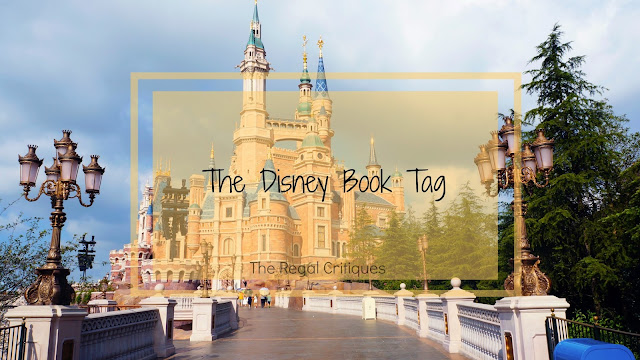 Hello everyone! *waves* Today I'm here with a cute, little tag that I hope will put a beautiful smile on your face, as anything Disney movie related is bound to do. The Disney Book Tag was created by Katytastic who came up with ten different questions all of which are related to ten HUGE Disney movies you'll see in this post. EXCITING, RIGHT?

If this bland as hell description of what this post contains didn't manage to convince you to click on "continue reading", let me tell you that THERE ARE GIFS, LOTS OF GIFS.

A character who is out of their element, a “fish out of water”.

ALL the girls from Beauty Queens by Libba Bray. What happens when beauty teen contestants' plane crashes and leaves them stranded on a mysterious island without any way of going home or asking for help? Apparently, they feel like a fish out of water at first, but quickly began to adapt to their surroundings, brainstorm some ideas, and they not only manage to survive, but they craft a brilliant living space for themselves AND kick some ass. SUCH A WONDERFUL BOOK.

A character who goes through a major transformation.

I couldn't think of anyone better than Nemesis from The Diabolic for this question. She leaves her previous life behind not caring what happens to her, has overall very little respect for herself, thinks herself no more than a lifeless robot. AND THEN she starts to learn more and more about herself, realizes that she HAS feelings - and acting on them isn't always bad - and that her life is worth JUST AS MUCH as any other person's. Her transformation is incredibly beautiful and powerful.

A book with an eclectic cast of characters.

I think you can hardly get any more eclectic than cast of the Lady Julia Grey series. Every single character is incredibly well-crafted and super-duper different from the others. What I especially love about this series is how there are new faces introduced in each novel, as there's always a new mystery to solve, yet I never confused anyone with someone else, SO YAY for all these unique and interesting characters - be they more or less important ones.

A book that put you to sleep.

You guys, I know so so SO many of you love Shades of Magic, but I just couldn't deal with A Gathering of Shadows, even though I really enjoyed A Darker Shade of Magic?? SO I'M CONFUSED about where exactly this went wrong, because I was bored out of my mind while reading this one, despite being SO READY to join the hype. *cries*

A character who had something traumatic happen to them in childhood.

Julian's (from A List of Cages) parents died when he was still incredibly young, and then he was brought up by his uncle under the worst kind of physical and mental abuse, thinking he was worthless. I don't know what could be more traumatic than that, my heart was breaking for him all through the novel, but then, thank God, Robin Roe managed to glue the shattered pieces back together and gave me HOPE for Julian's future. Read my review here.

6. Beauty and the Beast

A beast of a book that you were intimidated by, but found the story to be beautiful.

The whole Mistborn trilogy by Brandon Sanderson could qualify for this question, because my copies - the newer edition you can see above - were all 600+ pages long, The Well of Ascension actually being 781 pages long. Intimidating to say the least, especially because I binge-read the whole trilogy.

A character who gets their wish granted, for better or worse.

I HAVE NOTHING FOR THIS ONE, NOTHING. So let us look at some pretty gifs from Aladdin.

A character who pretends to be someone or something they are not.

The first character that came to my mind was Luca from the Blood for Blood trilogy, because deep inside he's always desired to be more than the under-boss in the family, but he could never share that with anyone for obvious reasons. He always had to act totally cool and control, but he was such a softie at heart - well, sort of.

A book with characters you wish would come to life.

The main characters in My Lady Jane were all SO FUN, I'd love love LOVE to meet with them in real life. Obviously, Jane was my favorite with her book obsession, but I honestly I adored them all.

I don't much care for villains, but morally ambiguous characters are my life, and one of my favorite - if not my favorite - is KAZ BREKKER from the Six of Crows duology. One of the most complex and well-written characters ever. Also, him and Inej are a total OTP.

LET'S CHAT!
What's your favorite Disney movie of all time?
Do you have ideas for any of these questions? DO SHARE!

I'm not tagging anyone, but if you want to do the tag, feel free to consider yourselves tagged.

Email ThisBlogThis!Share to TwitterShare to FacebookShare to Pinterest
Labels Book Tags and Surveys, Lists, Other posts