“We have a saying here in Iceland. Without a book in his hands, a person is blind.” 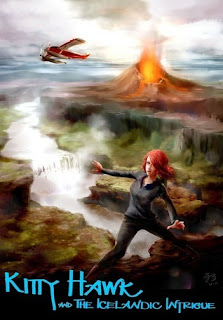 Following in the footsteps of her hero Amelia Earhart, Kitty Hawk sets off on an epic flight around the world and arrives in Iceland's capital city of Reykjavik where she finds herself immersed in a beautiful alien world of volcanoes, Vikings, elves and trolls.

Before she knows it Kitty is plunged head first into an amazing adventure that sweeps her across a rugged landscape where humans and nature exist side-by-side in an uneasy truce and magical realms seem to lie just out of sight beneath the surface.
Kitty Hawk and the Icelandic Intrigue is the dazzling third installment of the Flying Detective Agency series featuring Kitty Hawk, an intrepid teenaged seaplane pilot with boundless curiosity and a knack for getting herself into - and out of - all kinds of precarious situations.

This is a perfect book to fire the imaginations of readers of all ages - armchair explorers and amateur detectives alike. From dangerous criminals and corrupt government officials to mystical beings and clashes with the elemental forces of nature, this book has it all. Come and join Kitty Hawk as she experiences the strange and extraordinary world of the Icelanders, and unravels the Icelandic Intrigue.

Received with thanks in exchange for an honest review from the author and Book Publicity Services.

Following her adventures in Alaska and Key West, Kitty Hawk and her trusty De Havilland seaplane are now in Reykjavik, Iceland, all set to truly begin her journey around the world. She is looking forward to exploring the city in all its beauty and mystique when she is thrown headfirst into another adventure (of course!) and has to keep her wits about her as she sets out to figure who exactly is behind all the havoc wreaked. Perhaps it’s someone she knows… Perhaps it’s elves! You can never tell in a land such as Iceland where magic lurks just around the corner.

“Iceland is unlike almost every other place on Earth in that it is a nation without pre-historic period of human habitation. It is a country without a past.”

What I loved most about this book, just like in the previous ones, is how at ease the author seems to be in describing the setting. You may as well be have been just plonked down in the middle of nowhere in Iceland while reading the book- so well is the place described. I previously had no interest whatsoever in visiting Iceland, but now I’m definitely intrigued. (In a completely unrelated note, what an apt title!) From the culture to the folklore to the naming system, everything seems to have just a touch of magic (and a dose of bizarre?) and I thoroughly enjoyed lapping up everything that was described- except, most definitely, the vile Hákarl!

This time around, I really liked and could relate to the characters. My major complaint with the previous books was how I found it difficult to really care for the characters, but in this book, the characters were wonderfully built and everyone had a significant role in things turning out the way they do. Even the mysterious Finn. I loved the wonderful family Kitty stayed with, and both Konrad and Kristen were my favorites, apart from the wonderful Kitty…and her lovely-snarky-lovely inner voice, of course!

I loved the plot and everything the book dealt with- preserving nature being one of the main concerns. The writing was naturally brilliant and well-paced, and I was captivated right from the start- that action-packed prologue was totally something else! The mystery was deal with very well too, and unlike the previous books, I was actually taken by surprise when some of the twists came about. A very welcome change indeed!

Overall, Kitty Hawk and the Icelandic Intrigue was a thrilling, captivating, informative read with the most kickass female lead- if you've read the previous books, you'd know what you're in for! I ended up loving this even more than I did the previous ones, and in case you don't feel all that excited about starting a whole new series, you can still read this as a standalone...though why you'd do that to yourself and miss out on the fun is a complete mystery to me!