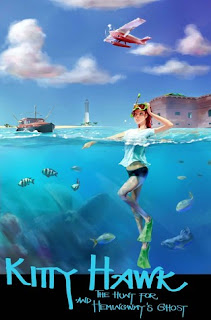 Kitty Hawk and the Hunt for Hemingway's Ghost is the exciting second installment in a new series of adventure mystery stories that are one part travel, one part history and five parts adventure. This second book in the series continues the adventures of Kitty Hawk, an intrepid teenage pilot who has decided to follow in the footsteps of her hero Amelia Earhart and make an epic flight around the entire world.

After flying across North America Kitty's journey takes her down south to Florida where she plans to get a bit of rest and relaxation before continuing on with the rest of her long and grueling flight. As Kitty explores the strange and magical water world of the Florida Keys her knack for getting herself into precarious situations sweeps her headlong into the adventure of a lifetime involving mysterious lights, ancient shipwrecks, razor-toothed barracudas and even a sighting of the great Ernest Hemingway himself.

This exhilarating story will have armchair explorers and amateur detectives alike anxiously following every twist and turn as they are swept across the landscape and history of the Florida Keys all the way from Key West to the strange and remarkable world of Fort Jefferson and the Dry Tortugas.

I was quite surprised when I realized how much I loved being in Kitty Hawk's world when I picked this book, the second in the series, up. Don't get me wrong, I loved the first one, but I never did honestly expect to grow as attached to this world as much as I have. Kitty Hawk and the Hunt for Hemingway's Ghost follows Kitty as she and her trusty De Havilland Beaver make their way across the world following the steps of Amelia Earhart and arrive at the Florida Keys.

On setting her foot in what used to be the residence of Ernest Hemingway, Kitty stumbles upon the rumour that his ghost is in fact haunting the place, and if that wasn't intriguing enough, Kitty also sees with her very own eyes what seems to be Hemingway's boat, with none other than the man himself at the wheel! Not long after, she also hears the suspicious sounds of an old typewriter clicking away at Ernest Hemingway's old house, and this, as you can imagine, creates quite the urge in Kitty to nose around as she's wont to do, and so she does!

What I loved the most about the first book, Kitty Hawk and the Curse of the Yukon Gold, is how the author managed to incorporate all sorts of interesting things about nature in all its brilliance into the story, and I'm extremely happy to say that it's no different here. Everything about Key West, Florida is described very vividly and in much accuracy, from Sloppy Joe's Bar to the key lime pie served there...from the gorgeous beaches to the barracudas you'd see when you go snorkelling...from Ernest Hemingway's house right down to the rare six-toed cats that reside there. In fact, if you ever decide to visit the Florida Keys, just take this book along with you- you'd need no other guide, I kid you not!

The history of the area, including all about Hemingway and the maritime history about Florida is described with such detail that you'd feel yourself being taken back in time. I learnt a lot of things that I didn't know prior to this and it was really brilliant to read about the Spanish colonial shipwrecks, the pirates and the treasures. I love how the author manages to always convey the background of an area in an interesting, captivating way.

Kitty and the snarky little voice in her head are back with their amusing exchanges, and this, just like in book one, is something I really appreciate! I also love Kitty as a character- her spunk and attitude are still on point and I love how she always manages to land herself in trouble all the time- more fun for the reader, yes? *sniggers* There are a few other new characters in this book, and they all serve their purpose. I wish James had been given more action, we just barely got to know him at the beginning and then again, he had an appearance at the end. A bit more space for him in the story would have been great.

This leads to one of the minor drawbacks in this series, at least in my opinion- I don't have an emotional connect to any of the characters. Obviously I love Kitty, but I always do like to have a more intimate relationship with my favorite characters in books, especially when it's a series. I hope this would be remedied in the future- this is going to be one long series after all! (But of course, these work very well as standalones, too!)

In terms of plot, I liked the mystery, but I do wish it had been more fast paced, especially towards the ending. The slow pacing work in the beginning, but it would have been really great if the story gained acceleration as it flowed. This is probably due to the fact that everything- the history and all that- was described in much detail, even towards the end when things should have been building up. Making it a bit more concise would have helped a lot!

All said, Kitty Hawk and the Hunt for Hemingway's Ghost was a fun, adventurous read that had me both entertained and informed! The author sure knows how to keep the reader glued to the pages, and I can't wait to see what Kitty gets up to in the next book, where she goes to Reykjavik, Iceland, a land of volcanoes, Vikings and ice!