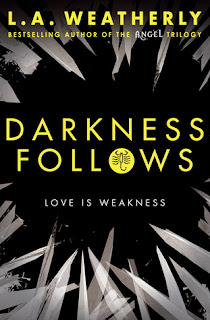 Welcome to Harmony 5: a secure prison camp where the rebellious and the Discordant are broken. Amity is their newest inmate. The rules are simple here: obedience or death. Anyone caught trying to escape is executed. But former Peacefighter, Ingo, is prepared to risk everything for freedom. And in a world this dark, what has Amity got to lose?

The second in a brand-new YA trilogy with an exhilarating mix of irresistible romance, breath-taking action and thrilling mystery. Effortlessly fuses the old-style glamour of 1940s America with the corrupt menace of a futuristic world in a hugely original twist on the steampunk genre - Blitzpunk. Darkness Follows is a chilling and compelling journey of revenge, survival and love.

Received from the publisher in exchange for an honest review.

It's no secret that I loved the first book in this trilogy- Broken Sky had everything I ever wanted in a dystopian and I could only devour it greedily as the story unfolded. Darkness Follows, I'm beyond delighted to inform you, was no exception. In fact, I liked it even better than the first book and that's saying something considering how much I loved that one. Despite this not being my usual cup of tea, the author works her magic yet again to deliver exactly what was promised: a chilling and compelling journey of revenge, survival and love.

The story unfolds sometime after Broken Sky ended and we see that a lot has happened already- nah, not going to tell you what, but trust me when I say there's ample twists and turns in this book to keep you hooked and how! I found myself being taken by surprise right from the start, and this only continued throughout the book. Just like in Broken Sky, the world-building here is just terrific. We get to see more of Amity's world and damn, it was just superbly written. The author should definitely be lauded for creating such a tangible atmosphere.

Amity was as kickass as ever. Certain things that happened during the course of the story definitely affected her and we see her undergo a great deal of character development. The Amity we see towards the later part of the book is far, far removed from the person she was in book one, and I'd love to see how her character arc takes its form by the end of this trilogy. Another character whose growth would take you by surprise is none other than Collis Reed. I wasn't impressed with him to begin with, but his actions at the beginning of this book made me downright hate him and therefore I wasn't really pepared to forgive him. Nevertheless, he goes under a lot of development and shows us that a man can indeed change. Well, he'd better keep up the good work is all I'm saying since Ingo kinda sorta has my heart.

There wasn't, thankfully, a love triangle, but we did get to see more of Ingo in this book and that was very welcome- he's one character who you'd no doubt warm up to. While I'm not entirely sure I want any romance between him and Amity (I have a feeling Collie wouldn't go down without a fight even if it comes down to it), I do hope the series has more to offer him. Hal, Amity's brother makes an appearance here as well, and while I couldn't help but feel like punch him in the face when he so readily accepted Collie, I did like him. Another character who had a small role in first book one but makes  a solid impact here is Mac Jones, and I was always rooting for him and Sephy. In fact, theirs might just be my favorite ship here and I can't wait to see if Sephy's "maybe" will finally turn to "yes" in the next book!

I really missed Kay Pierce's POV in this one, though! I loved seeing both Amity's and Kay's sides of the story in Broken Sky, so not seeing what was going on in Kay's world this time around was a bummer. I do however agree that it contributed towards maintaining the suspense of the story, speaking of which- the reveal of what exactly happened and did not happen with regards to Collie's betrayal wasn't much of a surprise since I could totally see it coming. Nevertheless, there were a couple of major twists towards the latter part of the book that I really appreciated. One in particular was so out of the blue that I still can't quite wrap my head around it.

What's really brilliant about this story is how realistic it all seems. The characters, the setting, everything. It's all so well-written that I had no trouble conjuring up everything that happened in my mind (the correctional camp part, in particluar, was simply spectacular) and I just felt so at home in this world. You see where the characters are coming from, you understand why they do what they do, and despite them having multiple shades, you'd find yourself rooting for them- even though you may not necessarily agree with everything they do- and that right there is where the author succeeds.

Let me just say that book three is going to be fabulous. I have high, high hopes pinned on it, and here's hoping the grand finale would be every bit worth it!