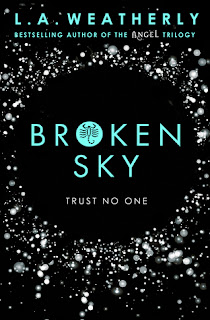 Welcome to a ‘perfect’ world.

Where war is illegal, where harmony rules.

And where your date of birth marks your destiny.

But nothing is perfect.

And in a world this broken, who can Amity trust?

From the bestselling author of the Angel trilogy comes Broken Sky – an exhilarating epic set in a daring and distorted echo of 1940s America and first in a new trilogy.

Received with thanks in exchange for an honest review from the publisher.

Broken Sky was a thrilling dystopian fantasy set in "a daring and distorted echo of 1940s America", as the blurb put it. Reading that the first time had me confused- would it be set in an alternate universe of America in the 1940s? But then that would hardly be dystopian, so what exactly would be the case here?

Well, giving a unique twist to the Dystopia we usually see, the author has built a world set in the future, but there has been a strange regression in terms of technology and lifestyle that it all resembles what we know of America in the 1940s. And if that isn't intriguing in itself, we also have a power-hungry dictator obsessed with astrology, and it is astrology he uses to aid him in weeding out people with the "wrong" birth chart. These peope are said to be the root cause of the society's ills and they are ultimately arrested and sent to a correction camp. Terrifying, isn't it? Quite like the World War Two scenario and Hitler. You see what the blurb meant now?

While I definitely don't believe in astrology, I've always been fascinated by how the personality traits and things described by it are often on point, so while this book didn't at first look like my usual cup of tea, there was no way I would have not tried this either. Am I glad I did? You bet I am. Broken Sky turned out to be a unique story told in the POVs of two kickass female leads. Read on to know exactly why this turned out to be a perfect first book in an trilogy!

The plot was extremely original, and I wouldn't hesitate to say I've never come across a concept quite as intriguing as this. I loved the setting, and the 1940s vibe throughout matched the narrative perfectly. While I took my own sweet time to feel comfortable with the world (this happens to me in fantasy usually, so it's an it's-not-you-it's-me thing here), the world-building itself was terrific.

The use of astrology, and that too in a dystopian world is really remarkable indeed, and I loved how fresh and realistic it all was. Everything was established very efficiently by the author within the first few chapters, and from thereon, the story was very comfortably paced, with things accelerating brilliantly towards the ending. I found the politics involved a bit tedious at the beginning, but then things started heating up and I was pretty much glued to the pages.

The story is narrated in the POVs of two fierce, kickass heroines- Amity, a peacefighting pilot and Kay, an astrologer (who both quite ironically think astrology is a pile of sh*t)- and they both exhibited slow but sure development throughout the course of the story and had me rooting for them which is exceptional considering the fact that while one is working to bring down the dictator, the other is helping him for reasons which aren't very clear. There are a host of other secondary characters who contributed towards the story in their own way- though they admittedly could have done with more depth.

The romance was allowed to take a backseat here (and what a welcome change that was!), however it did still have a significant impact on the story. I wasn't all that impressed by it at the beginning, largely thanks to Collie, Amity's boyfriend, but I loved how their relationship evolved so much to the point where I was really worried when things took a bad turn. There were various other relationships that were of much importance and I'm pleased with how the author dealt with them all.

The writing was fantastic, and the action sequences were done very brilliantly indeed. In fact, the author's flair for them should definitely be lauded. There was no point where I was wishing things would go faster or slower- it was all just right. The mystery was built very well and I loved how the twists were done. The sense of suspense throughout the story made for a very engaging read, and I loved how the story ended- how very fortunate I have the second book right in my hands- I wouldn't have liked waiting to know how things turn out for Amity, Kay and the rest, that's for sure!

Overal, Broken Sky was the perfect first book for a trilogy- it ended with just the right amount of suspense to keep me excited for the next book, while still tying up everything satisfactorily. This is a book you just can't miss if you're a fan of dystopia- the unique twist to the genre only makes it all the more exciting!