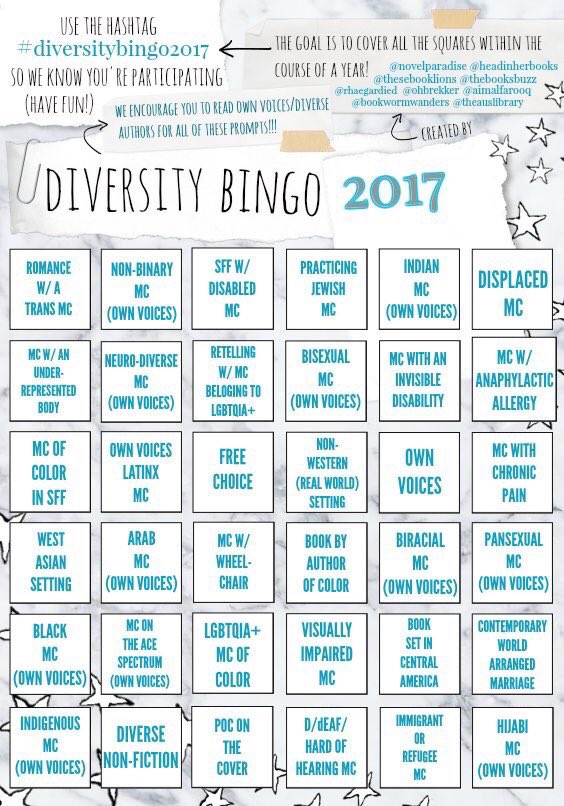 Hello, there! If you've been lurking around this part of the blogosphere, you'd no doubt have noticed my announcement about taking part in #DiversityBingo2017!
If you haven't (since, quite understandably, you have much better stuff to be doing rather than see me and my neverending word vomits), fear not- I'm back today with the spectacular TBR I've put together for this!

After quite some research, I managed to create a grand list of over 150 books (yeahhh, I didn't go overboard there or anything) and after much thought and consideration, I brought it down to just over 140- so in this post, I've included my choice for #DiversityBingo2017, and I've also added 3 other suggestions for each category so that it may serve as a reference for myself in the future...and for you, if you think it's helpful!

I've tried to verify all books included as much as possible, but if you feel any of these don't belong in their category, do please correct me! And even though I may have added a book into a certain category, it may also fit into other categories- just so you know. Anyhoo- I'm ridiculously happy with how this turned out, and I hope you find this helpful! 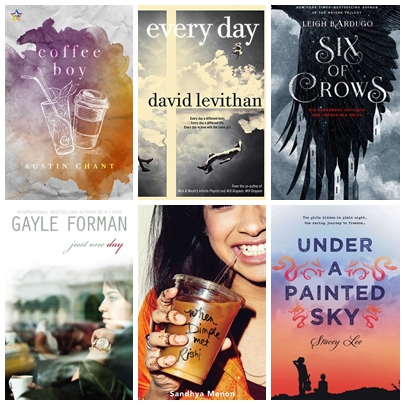 When the Moon Was Ours by Anna-Marie McLemore, Roller Girl by Vanessa North, If I Was Your Girl by Meredith Russo

Nonbinary MC (own voices): Every Day by David Levithan- it has been brought to my notice that this book is fatphobic, and while I'd like to read it for myself before coming to any conclusions, do consider this as a warning if you do plan to pick it up!

Symptoms of Being Human by Jeff Gavin, Behrouz Gets Lucky by Avery Cassell, Lizard Radio by Pat Schmatz

Flying Without a Net by Em Ben Shaul, Everything is Illuminated by Jonathan Safran Foer, Can't We Talk About Something More Pleasant by Roz Chast

Born Confused by Tanju Desai Hidier, Mirror in the Sky by Aditi Khorana, Queen of Dreams by Chitra Banerjee Divakaruni

Displaced MC: Under a Painted Sky by Stacey Lee

In the Shadow of the Banyan by Vaddey Ratner, Displaced Persons by Ghita Schwarz, The Refugees by Viet Thanh Nguyen 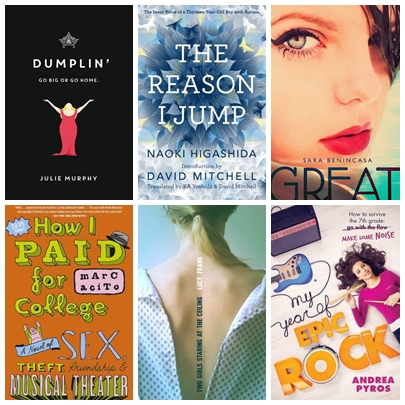 The Upside of Unrequited by Becky Albertalli, If the Dress Fits by Carla de Guzman, Fat Girl on a Plane by Kathy de Vos

Neurodiverse MC (own voices): The Reason I Jump: The Inner Voice of a Thirteen-Year-Old Boy with Autism by Naoki Higashida

History is All You Left Me by Adam Silvera, Maggot Moon by Sally Garnder, M is for Autism by The Students of Limpsfield Grange School

The Dark Wife by Sarah Diemer, Marion by Ella Lyons, As I Descended by Robin Talley

Bisexual MC (own voices): How I Paid for College: A Novel of Sex Theft, Friendship & Musical Theater by Marc Acito

Queens of Geek by Jen Wilde, The Gallery of Unfinished Girls by Lauren Karcz, Out on Good Behaviour by Dahlia Adler

MC w/ and anaphylactic allergy: My Year of Epic Rock by Andrea Pyros MC of colour in SFF: Labyrinth Lost by Zoraida Cordova

An Ember in the Ashes by Sabaa Tahir, Beyond Body Space and Time: An Indigenous LGBT SciFi Anthology by Hope Nicholson, Dove Arising by Karen Bao

The Inexplicable Logic of My Life by Benjamin Alire Saenz, Gabi, A Girl in Pieces by Isabel Quintero, Wild Beauty by Anne-Marie McLemore

Sunbolt by Intisar Khanani, Am I Normal Yet? by Holly Bourne, Instructions for a Second-Hand Heart by Tamsyn Murray

In Order to Love by Yeonmi Park, A Long Way Gone: Memoirs of a Boy Soldier by Ishmael Beah, Want by Cindy Pon

Own voices: The Flywheel by Erin Gough (also known as Get It Together, Delilah!)

MC w/ chronic pain: Far From You by Tess Sharpe 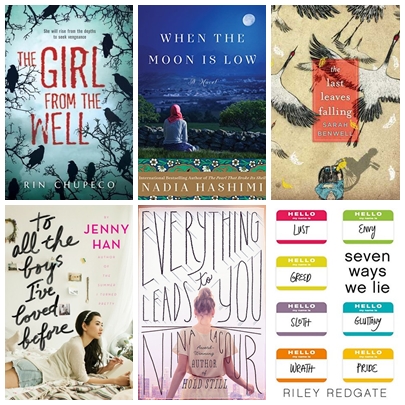 West Asian setting: The Girl from the Well by Rin Chupeco

Rooftops of Tehran by Mahbod Seraji, The Morning They Came for Us: Dispatches from Syria by Janine Di Giovanni, The Turtle of Oman by Naomi Shihab Nye

Arab MC (own voices): When the Moon is Low by Nadia Hashimi

Habibi by Naomi Shihab Nye, It Ain't So Awful, Falafel by Firoozeh Dumas, The Servant by Fatima Sharafeddine

The Defectives by Burgandi Rakoska, Mia Lee is Wheeling Through Middle School by Melissa Shang, Out of My Mind by Sharon M. Draper

Book by author of colour: To All the Boys I've Loved Before by Jenny Han

Another Word for Happy by Agay Llanera, Purple Hibiscus by Chimamanda Ngozi Adichie, The Marauders' Island by Tristan J. Tarwater

Biracial MC (own voices): Everything Leads to You by Nina LaCour

Abby Spencer Goes to Bollywood by Varsha Bajaj, The Girl from Everywhere by Heidi Heilig, Heroine Complex by Sarah Kuhn

Out on Good Behavior by Dahlia Adler, The Melody of You and Me by M. Hollis, Beyond Magenta: Transgender Teens Speak Out by Susan Kuklin 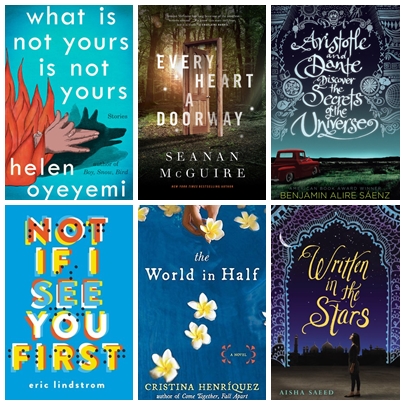 Black MC (own voices): What's Not Yours is Not Yours by Helen Oyeyemi

The Hate U Give by Angie Thomas, This is How it Went Down by Kekla Magoon, Pointe by Brandy Colbert

MC on the ace spectrum (own voices): Every Heart a Doorway (Wayward Children #1) by Seanan McGuire

LGBTQIA+ MC of colour: Aristotle and Dante Discover the Secrets of the Universe by Benjamin Alire Saenz

Not Your Sidekick by CB Lee, Tell Me Again How A Crush Should Feel by Sara Farizan, Swimming in the Monsoon Sea by Shyam Selvadurai

Visually impaired MC: Not If I See You First by Eric Lindstorm

Book set in Central America: The World in Half by Cristina Henriquez

The Weight of All Things by Sandra Benitez, Assault on Paradise by Tatiana Lobo, Silver People by Margarita Engle 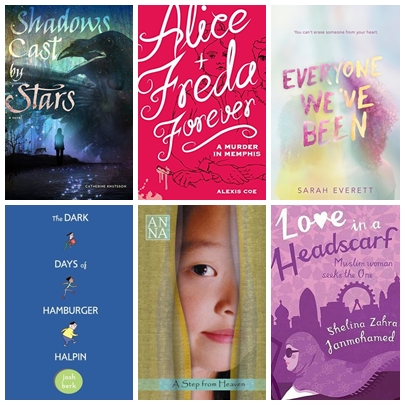 The Interrogation of Ashala Wolf by Ambelin Kwaymullina, If I Ever Get Out of Here by Eric Gansworth, The Absoluetly True Diary of a Part-Time Indian by Sherman Alexie

Redefining Realness by Janet Mock, Fresh Off the Boat by Eddie Huang, Being Jazz by Jazz Jennings

PoC on the cover: Everyone We've Been by Sarah Everett

D/dEAF/hard of hearing MC: The Dark Days of Hamburger Halpin by Josh Berk

Immigrant or refugee MC: A Step from Heaven by An Na

The House on Mango Street by Sandra Cisneros, American Street by Ibi Zoboi, Girl in Translation by Jean Kwok

Hijabi MC (own voices): Love in a Headscarf by Shelina Zahra Janmohamed

Sofia Khan is Not Obliged by Ayisha Malik, Does My Head Look Big in This? by Randa Abdel-Fattah, She Wore Red Trainers by Na’ima B. Robert

Well, so that's it with my tbr+recs! I super-excited about the books I've picked for myself and I do so love working towards a goal, so I feel #DiversityBingo2017 will be the perfect source of motivation. I hope I manage to read these well before the end of the year so I can pick up some of the other wonderful titles I've been dying to. 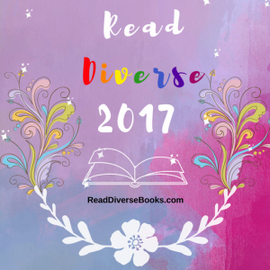 While I'm well aware that I am already overcommitted for 2017 (it's my final year at uni too, so saying I'll be busy would be an understatement), but when I came across #ReadDiverse2017 hosted by the wonderful Naz @ readdiversebooks.com I knew I just had to take part in it. I think it's a great initiative to make readers both read and review books, thus assuring maximum exposure to those that celebrate diversity. I hope I manage to review a decent amount of diverse books this year, and this challenge would no doubt motivate me! Check out this post to see what it's all about!


If in case you think you'd rather try something less taxing, there's another reading challenge, #DiverseReads2017, hosted by Mishma @ Chasing Faerytales and Shelly of Read. Sleep. Repeat- check it out here!

For further recs, here are a few sources I referred to:

Ace Character List by Asexuality in Fiction
List of fiction by Muslims, about Myslims by The Muslim Squad
Book Lists by Diversity in YA

Well, so that's it! I really hope you find this to be helpful, and like I said before, if you find any mistake here, do please excuse me and let me know where I went wrong!

What are the reading challenges you're taking part in this year? Are you planning to read more diversely?
If yes, what are some of the books you're looking forward to?
Let's talk in the comments below!
Written by: Ruzaika @ Wordy & Whimsical date: 06:39