Book Characters Who Slayed My Life in 2016 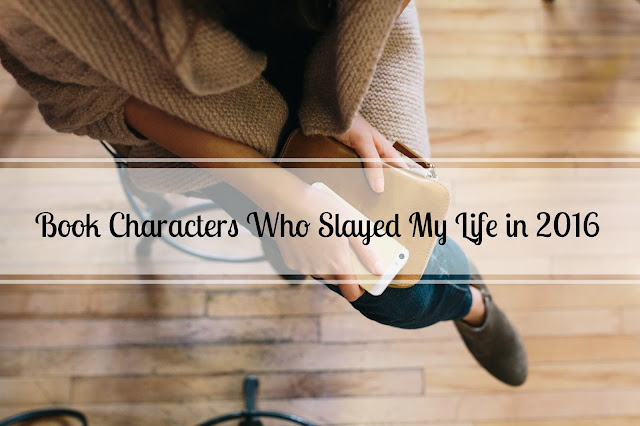 Hello sweeties! First of all -


Hope all of you will have a wonderful time this holiday season with cool presents, great food, BOOKS, your loveliest relatives (if there's such a thing) and/or friends. (Maybe even snow? Though, bruh, I hate it, despite how pretty it *can* be... from the inside. Emphasize on "can" here.)

As for today's end of the year summary post, I'm going to talk about the bestest characters I've encountered with this year, all of whom - be killers or non-killers - are precious diamonds, who should be protected at all costs. DON'T EVEN SAY OTHERWISE, OR ELSE...

No, I'm joking, I'll definitely hear out why you didn't like these perfect little nuggets. Yeah, totally. *cold smile*

Here's a little info on what these 4 posts are about and why I decided to write them:

Let's not lie, 2016 was a pretty shitty year for various reasons, but I'm not here to talk about any of those, nuh-huh. Christmas and the new year are rapidly approaching and we need some positivity in our lives, which, in my book, means that I'll try to cheer you all up with some crazy fangirling. Makes so much sense, I know. *nods*

In these 4 posts - including this lovely here - I'm going to share with you stuff that made me smile, beam, laugh etc. etc. etc. in 2016, and, of course, I'm hoping they'll have the same effect on you. Oh, and WE SHALL BOND OVER ARE COMMON FAVES AND OBSESSIONS, 'KAY?

One more thing before we get started here - I'm not going to go into detail about why I adore these characters so much, I'll just list a few things that made them stand out for me.

Alex from The Female of the Species, because she's strong, unapologetic and doesn't fear the truth. No matter what she's done she deserved the world for never losing herself and remaining kind and caring.

Kaz from Six of Crows for being ruthless, cunning - which I loved in him, fyi - BUT STILL ADORABLE WHEN IT CAME TO HIS FEELINGS FOR INEJ. Like, their final scene together was to die for, I tell you.

Inej from Six of Crows, because she's extremely brave and conquered her fears and demons like few people are able to. AND SHE DEVELOPED SO MUCH OMG. Just if we look at her relationship with Kaz - which seems to be what I end up talking about no matter what - she went from not even trying to understand Kaz, to accepting him and being like, yeah, let's give us a chance ASKWKSKSWAS.

Nina from Six of Crows, because she's fucking empowering by being proud of who she is, what she stands for and how she looks. Also, SHE'S SUCH A FOOD LOVER OMG. Kaz said to pack only necessities AND SHE BROUGHT TOFFEES. #me

Norah from Under Rose-Tainted Skies, because she's so freakishly strong, even if she didn't always believe so. Despite how hopeless she felt sometimes, she never gave up on her goals and dreams, and that was just beautiful.

Jane from My Lady Jane, because she DARED TO BE DIFFERENT, and that can be fucking hard sometimes, especially when people are pushing you to be "normal". I think she's one of the biggest bookworms I've ever encountered with, SO THAT'S NICE, TOO.

Victor from Vicious, because he was vicious and vindictive, yet had this thing for strays and was actually quite caring. His complexity was just off the charts, so, OF COURSE, I adored him.

Kelsier from The Final Empire for being deliciously complex and king among morally gray characters. He tried his best to be a great mentor to Vin and he literally fought until his very last breath - and even after that - for their goals, which is a bit manic, maybe, but still something to look up to.

Katy and Daemon from Lux, because they form such a wonderful team. Like, I love them as individuals - who wouldn't, though? - BUT TOGETHER THEY'RE ABSOLUTELY FANTASTIC. Also, the development they went through to form this perfect - well, mostly - unit is unbelievable.

Kaleb from Psy-Changeling, because he's never lost the ability to love and care about people, despite how horrible his life was. Sure, he was a morally gray characters at best, but I LOVE HIM SO MUCH, OKAY?

Sienna from Psy-Changeling, because she was such a stubborn and super-smart force to be reckoned with - I was in serious awe of her strength and stamina. SHE'S AN AWESOME PERSON, AS WELL - such a good sister and relative and friend and girlfriend - someone who puts others' needs in front of her own. Thankfully, she found people who do the same for her, because THE WOLVES ARE JUST A BEAUTIFUL FAMILY. *sobs from the beauty of it all*

Agnieszka from Uprooted, because she's one of those friends who'd go to hell and back to save the ones she loves, and wouldn't expect anything at all in return. She's headstrong, persistent and brave.

Gansey from The Raven King, because he's a terrific person all around - he'd do literally anything to help out his friends. I mean, HE GAVE UP MONMOUTH MANUFACTURING FOR RONAN, which was like his very favorite place. And he didn't do it for gratitude either, he's totally okay with Ronan not even knowing what he did for him. *cries*

Blue from The Raven King, aka the most under-appreciated heroine ever, who deserves all the happiness in the world. She's one of those quietly confident people who doesn't go around screaming, LOOK AT ME, I'M SO PRECIOUS AND SELF-ASSURED, but I don't think there was even one moment in the book where she doubted her looks/style/whatever. SHE'S ABSOLUTE GOALS, and I'm sorry if you can't see that.

Rudy from The Book Thief, because he's such a cute little muffin who wasn't only a kickass friend, but an adorable troublemaker, as well. Like, I loved Liesel, so so SO much, but Rudy will always be my favorite from the novel. *uncontrollable sobs*

Kady from Illuminae for being an even more persistent fighter than Katniss Everdeen - she reportedly accomplished the impossible and had me in awe. Actual goals, people.

Hanalee from The Steep and Thorny Way, because she stayed level-headed even in the worst situations. The novel starts with her literally wanting to murder the person who caused an accident that killed her father, but in the end she has enough strength and patience to listen to him, which is like, WOAH. Most people would have just gotten that shit over with, but she was ready to listen to reason. Also, she's not here for your racist & homophobic bullshit.

Grace Mae from A Madness So Discreet, because despite all the shit she'd been put through she remained quite an openhearted person. Instead of bathing in her misery and sadness, she showed deep compassion towards others and did her best to ease their pain.

Puck from The Scorpio Races, because she was finally a character who was as much of the queen of impulsive decisions as I am. Also, she kinda loathed change, which is quite a common feature in people, but only rarely addressed in novels, so huge kudos for that.

Rachel from Devoted, because she's fearless - she followed her dreams and created a beautiful life for herself. And after she realized how wrong everything her community has taught her was she still remained a believer and stayed open-minded to other churches.

Alice from Yesternight, because her fight for equality in 1925 was so damn empowering. No matter how meticulously she studied or how hard she worked she was under-appreciated at all times, while her less qualified collages were given the bestest jobs. YET, SHE KEPT GOING.

Viktor & Sarai from In the Company of Killers
Mary from In the Shadow of Blackbirds
Dr. Thornhollow from A Madness So Discreet
Liesel & Hans from The Book Thief
Sean from The Scorpio Races
Vasic, Ivy, Sahara, Zaira, Aden and Hawke from Psy-Changeling
Audrey from Stalking Jack the Ripper
Jillian from An Inquiry Into Love and Death

DO WE HAVE ANY COMMON FAVES? LET'S FLAIL TOGETHER!

WHO ARE YOUR FAVORITE CHARACTERS?
Written by: Veronika @ Wordy and Whimsical date: 11:19