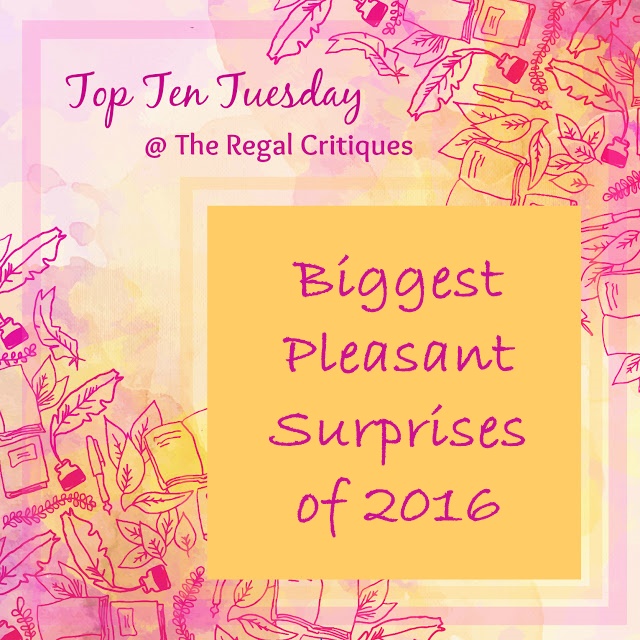 Hi loves! Today's Top Ten Tuesday (weekly meme hosted by The Broke and the Bookish) topic is all about our 2016 faves. As I'm starting to feel really bad about cheating nearly every week with the number of picks, this week I'm totally sticking to 10. *nods*

As choosing 10 faves (even narrowed down to certain genres or categories) is basically impossible, given that I read 150+ & loved more than half of them, I'm going to list 10 of the biggest PLEASENT surprises of novels I read in 2016.

This list was made at the end of October, any book read after that date is NOT included!
Click on the covers for Goodreads page.

Prior to picking My Lady Jane up I'd only read something by Cynthia Hand, and even that was a long time ago, so that was one reason I approached this one a bit cautiously. Secondly, so far most of the comical novels I've tried ended up totally disappointing me *cough Rebel Belle cough* BUT OMG I'VE NEVER IN MY LIFE - a bit of an exageration, but oh well - BEEN MORE PLEASANTLY SURPRISED BY A BOOK. My Lady Jane deserves all the stars!

HOW exactly was In the Shadow of Blackbirds a pleasant surprise, you may ask, knowing how much I adore anything and everything by Winters. Well, the first book I read by her - The Cure for Dreaming - wasn't as impressive as her other stuff, so it's understandable I went into ItSoB without expecting anything huge. And now I'm like, HOW COULD I HAVE EVER DOUBTED HER GENIUS? HOW?

Oh gosh, how many bad things had I heard about The Wicked Thing (TONS), and only a few (like 2) reviews I read recommended picking it up. Understandably, I wasn't too damn eager to read it and be devastated afterwards because of the lost potential. Thankfully, it turned out to be GREAT. Fantastic, actually. Sure, the plot is slow-moving, and the MC was a bit of a push-over, but she just got up after a long-ass sleep in a world where everything and everyone she's ever known is no longer there. GIVE HER A BREAK, OKAY?

I honestly didn't know what to expect from The Final Empire because I don't really read much from the epic-fantasy genre, especially the adult section of it, so even though my friend LOVED this one, I wasn't 1000% sure I will too. The whole trilogy is truly marvelous, BUT THIS ONE IS ACTUALLY ONE OF THE BESTEST BOOKS EVER. Can't wait to read more by Brandon Sanderson.

I love the Psy-Changeling series SO MUCH, but I had my doubts about Heart of Obsidian, bc I didn't know what to think about the male lead in the previous novels. I HAD NOTHING TO FEAR, THOUGH. As always, Singh created an honest to god epic romance, and Heart of Obsidian became my favorite of the whole series.

Uprooted was a popular novel after the publication, but there were quite a few negative reviews about it that made me unsure of reading it. I ended up loving it, of course, because it was SO UNIQUE in many ways and had one of the best friendships I've ever seen in a novel.

The Captive Prince trilogy by C. S. Pacat didn't really seem like my cup of tea, BUT WAS IT EVER. Okay, so I know a lot of people have a lot of problems with these books, (none of which I agree with, btw) but I think they're actually fantastic, with the third novel taking the crown, without doubt.

I've been hearing about Mindy McGinnis for years, but I've never been interested in reading any of her books (now I want to read all of them, of course) until I picked up A Madness So Discreet on a whim. It was twisted, emotional and so so SO different from anything I've ever read before. PERFECTION, in one word.

Devoted is one of my mostest favoritest books ever, so it might sound strange that, I think, to this day, I've never been more afraid of picking a novel up. I'm not religious, though, of course, I don't have any problems with anyone who is - a novel about religion, from the POV of a religious MC, seemed like something I may not be able to relate to. I'VE NEVER BEEN MORE WRONG. Devoted is the most beautiful and emotional novel I've ever read, with some kickass characters who I WANT TO KNOW IRL.

V. E. Schwab seems to be one of the biggest faves in the community right now, so I was incredibly disappointed when didn't adore The Archived and The Unbound, only really enjoyed, and then ended up DNF-in This Savage Song (don't kill me, k?). I thought I'll forever be the odd one out who hides away when ppl bring up their love for V. E. Schwab. BUT THEN CAME VICIOUS. AND IT WAS TOO DAMN AMAZING. So maybe her adult-stuff is what I should be reading and just leave her YA novels alone? IDK. Trying A Darker Shade of Magic soon.

Have you read any of these novels?
What were YOUR biggest pleasant surprises of 2016?
Written by: Veronika @ Wordy and Whimsical date: 05:00