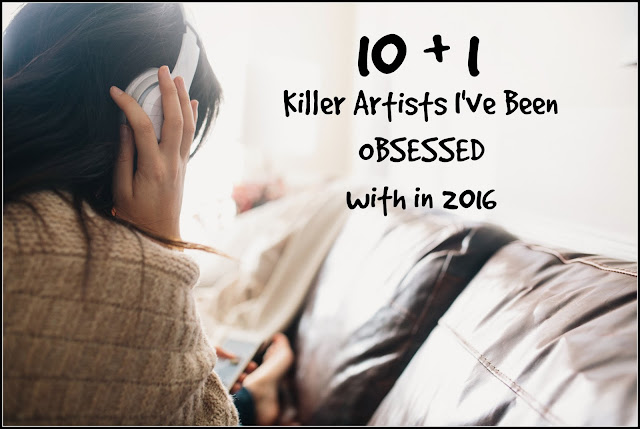 Hello to all of you, lovely people! Today's post surprisingly isn't book related - I'm sharing the artists I've been obsessed with in 2016. I'll be concentrating on those who released at least one new song this year to stop this list from becoming a mile long.


Here's a short description of what are these posts and why I decided to write them:

Let's not lie, 2016 was a pretty shitty year for various reasons, but I'm not here to talk about any of those, nuh-huh. Christmas and the new year are rapidly approaching and we need some positivity in our lives, which, in my book, means that I'll try to cheer you all up with some crazy fangirling. Makes so much sense, I know. *nods*

In these 4 posts - including this one lovely here - I'm going to share with you stuff that made me smile, beam, laugh etc. etc. etc. in 2016, and, of course, I'm hoping they'll have the same effect on you. Oh, and WE SHALL BOND OVER ARE COMMON FAVES AND OBSESSIONS, 'KAY?

Zara Larsson - a Swedish artist many of you may know thanks to her hit songs Lush Life and Never Forget You (featuring MNEK) - finally released new music in 2016 and it's THE BEST THING EVER OMG.

First, she was featured on David Guetta's song - This One's For You, which was okay, but nothing original, to be honest (Also, it pissed me off that whenever they were performing it she used playback, even though she's actually FIERCE live, but of course people who hadn't heard her before couldn't know that so they assumed she must suck. UGH, WHY.) However, her single Ain't My Fault was LIT, as well as I Would Like which is NOT a single, just a little tease of her new album (coming out in January EEK).

The Weeknd's new album, Starboy, came out at the end of November and I've been listening to it constantly ever since. His previous album, Beauty Behind The Madness was pretty kickass too, BUT STARBOY IS ON AN ENTIRELY DIFFERENT LEVEL - I love nearly all the songs and can't wait for him to release more videos, because I think he really upped his game in the newer ones. I'd do literally anything to see him live, but no one ever comes to Hungary, and concerts are pricey enough without having to travel to another country for them. *cries all the tears*

Tove Lo is another awesome Swedish artist whose second album, Lady Wood, came out this year, and, man, it's nothing if not incredible. My favorite song from the album is Cool Girl for sure, because IT WAS INSPIRED BY GONE GIRL, ONE OF MY FAVORITE BOOKS EVER. Influence (featuring Wiz Khalifa) and Keep It Simple are close seconds, but really, all the songs on Lady Wood are all kinds of fantastic.

Sia is one of the bestest, most original artist out there, in my opinion, who's been a total favorite of mine since Chandelier and who - hands down - released one of the best albums I've ever heard in 2016, called This Is Acting, that contains killer songs like Cheap Thrills, Move Your Body, Bird Set Free and Unstoppable. Also, I saw her on a music festival AND SHE ABSOLUTELY, A 100% KILLED HER PERFORMANCE. THAT VOICE IS UN-FUCKING-REAL.


See her songs on Spotify.

Little Mix's 4th album, Glory Days, came out in November and it's THE BEST THING EVER. I love each and every song on it - Shout Out To My Ex is my fave, if you're wondering - WHICH NEVER HAPPENS TO ME!! There are always a couple of songs that don't really work for me, but Glory Days is glorious from head to toe.

Now this resulted in me going back and listening to their older stuff - before Get Weird, because I've been a die hard fan ever since that album - and discovered so many song I haven't even heard before - like Competition. So yeah, it's safe to say that 2016 was the year I became freakishly obsessed with LM.

Years & Years and I were off to rough start - when King was all over music channels and the radio I didn't understand at all why people loved their music. Clearly, I was a total fool, because since then I realized how great they are. I could literally listen to their songs for days and not get bored. Unfortunately, they only released one new song this year, Meteorite, for the new Bridget Jones movie AND IT'S SO UNDERAPPRECIATED. *sobs*

On a side note, I saw them live this year on the same music festival I saw Sia and I'm in awe - they're all so adorable and everyone seems to be having the time of their life on stage, including the vocalists. Also, Olly's dance moves are something fierce.

Visit their Spotify page for more.

Troye Sivan is artist I wasn't really into at first, though that's probably because I didn't give him much of a chance. *hides* After he started to release music THE HYPE WAS CRAZY, and - for some unknown reason - that's bound to scare me away. However, this year, I heard Fools for the first time and I was instantly into his voice and lyrics and awwwwww the whole song is perfection... as is the whole Blue Neighbourhood album. Oh, and thank you for breaking my heart with the Blue Neighbourhood trilogy, much appreciated. *curls up in a ball*

Melanie Martinez has been a favorite of mine since I saw a quote from Dollhouse, checked her out and fell in love with her unique sound and style. While she didn't release new music this year she's created various music videos, the latest being Mrs. Potato Head, and my favorite being the Tag You're It/Milk and Cookies Double Feature. AND GUESS WHAT, the only song Melanie hasn't yet released a video for is Mad Hatter, aka my absolute favorite song of hers AND I'M SO DAMN EXCITED.

See her also on Spotify.

Imagine Dragons has been one of my faves since I first heard Radioactive and then the rest of their debut album, Night Visions. Obviously, I had grand expectations for their second album, Smoke + Mirrors, and I'm pleased to say they've all been met. AND DON'T EVEN GET ME STARTED ON HOW FANTASTIC AF THEY WERE LIVE, BECAUSE WE'LL BE HERE FOR HOURS.

They've just released Levitate for Jennifer Lawrence's new movie, Passengers, and, OF COURSE, it's pure perfection. CAN THESE PEOPLE EVEN CREATE BAD MUSIC? Nah, I don't think so. Also, they said their new album is coming- ASWLSFJKSWKS.

Check out their Spotify page.

Ariana Grande is, yet again, one of those artists who I wasn't sure about at first - I liked some of her songs, but thought her sound was pretty generic. That said, I've always found her voice powerful, energetic and gorgeous, so imagine how glad I was when she swept me off my feet with her latest album, Dangerous Woman. It contains a huge variety of killer songs, my three absolute favorites being Dangerous Woman, Into You and Greedy.


See her music also on Spotify.

The Neighbourhood is another band I've seen live, and I can safely say that their concert is one of my most cherished memories, because the atmosphere was so good, plus they totally crushed it on stage. I think my all time favorite song is Sweater Weather, but if I had to choose between their albums, I'd definitely pick Wiped Out!

They're the only artist on this list who hasn't released new stuff this year, but I've gotten to know them in 2016 and became absolutely obsessed with them after seeing them live this summer, so I couldn't not include them on this list.


See them also on Spotify.

WHAT WERE YOUR FAVORITE SONGS OF 2016? HAVE YOU DISCOVERED ANY ARTISTS WHO INSTANTLY BECAME YOUR FAVORITES? BEEN TO ANY COOL CONCERTS? WHOSE CONCERT WOULD YOU LOVE TO ATTEND?
Written by: Veronika @ Wordy and Whimsical date: 05:00

Email ThisBlogThis!Share to TwitterShare to FacebookShare to Pinterest
Labels Lists, Music, Other posts