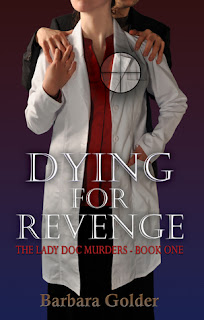 Someone is killing the rich and famous residents of Telluride, Colorado, and the medical investigator, Dr. Jane Wallace, is on a collision course with the murderer. Compelled by profound loss and injustice, Jane will risk her own life to protect others from vengeful death, even as she exacts a high price from those who have destroyed her world.

DYING FOR REVENGE is a story of love, obsession and forgiveness, seen through the eyes of a passionate, beautiful woman trying to live her life -- imperfectly but vibrantly -- even if she won't survive.

Received in exchange for an honest review from the author Corvisiero Literary Agency.

Dying for Revenge is a book I wanted to read as soon as I laid my eyes on it for several reasons, but the biggest one is that it has been simply ages since I read a medical mystery, much less one targeted for the adult audience, and of course, the synopsis was simply too intriguing to pass. I didn't really know what to expect from this book, though, since this being the author's debut and all, but I need not have worried because this turned out to be a very gripping page-turner indeed- my favorite kind!

Jane Wallace is a strong main character who has had her share of grief and loss in life. Moving to Telluride, a popular tourist town in Colorado from Florida, Jane is ready for some peaceful time to heal from the death of her husband. What awaits her here, though, is far from what she expected, and the story folds out as she's faced a string of suspicious deaths to deal with as the Chief Medical Examiner, while also dealing with her own personal inner battles.

I loved the protagonist- she was extremely strong and hardworking, and her character development was done really well as she attempts to break down the walls she had built around herself following her husband's murder. Jane Wallace aside, we meet a lot of other characters, all well fletched out and developed. They were mostly very relatable and it was easy to put myself in their shoes and see how and why they ended up doing what they did.

The writing was crisp, refreshing and captivating. I loved the author's attention to detail and not for one moment did I feel like putting the book down- even when my head cold was killing me, and that's saying something because I tend to be the crankiest invalid in the world when I'm down with a cold! I loved how the story folded out, and trust me when I say it was quite the thriller indeed! The twists were extremely unpredictable despite my best efforts at trying to guess, and I found myself being taken unawares all the time.

Dying for Revenge is a book I wouldn't hesitate to recommend to you if you'e on the lookout for a page-turner that would surprise and satisfy you through and through. Kudos to the author on such a thrilling debut- I, for one, simply can't wait for the next in this series!