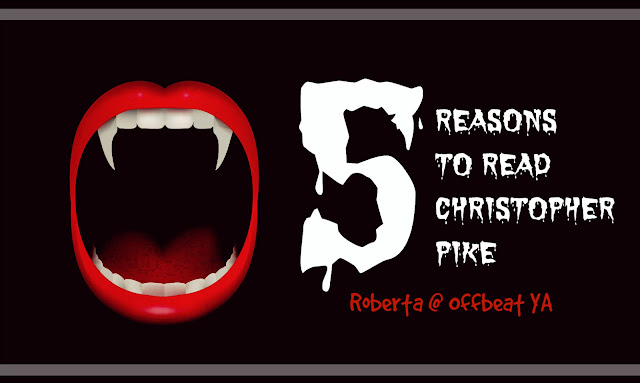 A warm hello to all the thrill seekers out there! :)

This is Roberta, hailing from a blog called Offbeat YA, but sharing the fun at The Regal Critiques during the Halloween season. Ruzi and Vera were so kind to engage me in a guest post for the occasion, and I was more than happy to oblige. Since the girls have recently launched a feature called "5 Reasons to Read...", I was inspired to write a 5 Reasons post about one of my favourite YA (and occasionally adult) authors: Christopher Pike. I suppose most of you have at least heard about him, but have you actually read any of his books? If not, I'm going to try and gently push you in his direction :). Please follow my lead for a little while...you can thank me later ;).

Reason N°1: Pike is the answer if you have outgrown R.L. Stine but are afraid to tackle Stephen King.
Now, I'm not saying that Pike's novels are tamer than King's...even the YA ones are surprisingly though stuff (more of this later), especially considering he penned most of them in the '80s and '90s. But there's a level of body horror in King's books that not everyone - me included - can stomach. Images that can haunt you to your grave. Not to mention, he's very foul-mouthed. I'm not saying that Pike shuns bad language, but even in his adult books, the level is far lower. The blood is real though ;).

Reason N°2: Pike doesn't talk down to teens.
Spoiler alert...Mr. Pike likes his characters nasty ;). I mean, they're flesh and blood - they scheme - they kill - they even have SEX! (Not graphic sex, but still). Big surprise, uh? Again, maybe that's not so rare these days, but 30 or 20 years ago? His brand of "mean" girls, most of the times, don't waste their time on meaningless pranks or bullying-for-the-sake-of-it. They are the real deal - wicked as they come - but usually with a cause. His heroines don't need the hot new boy next door to save them. Not all of them are kickass material, but they all hold their own. (I'm talking about heroines because Pike obviously has a flair for them, but he wrote a bunch of male protagonists as well. Though the girl are hands down the best). If you're tired of the usual ingenue/mean girl dichotomy, sink your teeth into Pike's books!

Reason N°3: Pike invented Dead Girl Books.
As far as I know, dead girls walking weren't a thing before Mr. Pike wrote Remember Me. Now there are several novels where the main characters (usually a girl) is dead and kicking, so to speak. But back in 1989? I don't think so. Pike came up with this idea of a eighteen old girl who is murdered at a party and wakes up dead, without a clue about her killer's identity. So she embarks on a quest for the truth - with the help of a somehow reluctant, previously deceased friend - and finds more than she bargained for in the process. This book is a gem, my friends. It is, actually, the reason why your truly started reading YA books, and later decided to review them. Also, it is the book that started my afterlife book obsession. To be honest, I have to say that, while Remember Me has two sequels, I wish it had remained a standalone...for more than a reason. Pike more or less admitted that he wrote the sequels for money - well, because his publisher requested them. Now the trilogy is only available as a whole package, so there's not avoiding RM 2: The Return and RM 3: The Last Story. Anyway, well, there are worse books - and RM 1 is a must read for all YA fans. But wait! Luckily for you, Remember Me is available on Mr. Pike's Wattpad page, in case you don't need to actually OWN it...

Reason N°4: Pike wrote the YA archetype of all vampire novels. Only better.
In 1994, Pike wrote a story about a seemingly young woman named Sita, only she's in fact 5,000 years old and - supposedly - the last vampire on earth. (We'll come to realise this is not entirely true, but this is how the first book starts). Then he proceeded on developing it further...reaching a total of six books. The series should have ended there, but partly due to the renewed interest in vampire books (*cough* Twilight *cough*), partly because Pike himself was/still is obsessed with Sita's characters, it was revived in 2010, and three more books have been added since then (with two more on their way). This series alternates between the danger Sita still brings to humanity - though her thirst is now much more under control than it used to be - and her will to help said humanity against even greater and more inhuman threats. The most interesting aspect of this series is its strong link with Eastern spirituality...Sita met Buddha when she was a very young vampire (we get lots of bits of her old life story and how she was turned), and the encounter and its consequences/reverberations have stayed with her for all her long life. Also, there are chapters of Sita's life set in the past, and Book 5 The Sacred Veil partly deals with the Holocaust. I'm not a history fan, but the way Pike weaves Sita's story with past events is fascinating...As far as the horror/gore factor goes (but I'd say, as far as everything else goes), this series is more adult-oriented than YA...it was marketed as YA originally, but then again, the overall mood and even Sita's age (set at 21, that is, when she was turned, because of course she doesn't age) are not your typical YA material at all - except for a couple of moments in Book 1. Oh, and Sita isn't your typical vampire either - she doesn't sleep in a coffin, she goes around in the sun, and she doesn't even sparkle ;D.

(In case you are interested, keep in mind that the series was originally called The Last Vampire, but has been rebranded as Thirst, where Book 1 contains the first three original installments, Book 2 the latest three of the original batch, and Book 3, 4 and 5 are the ones that have been added since 2010).

Reason N°5: Pike is not afraid to throw stuff at the wall and see if it sticks. Usually, it does.
I'm sounding like he does random things with his books, but really, I don't think that it's the case. Or that he does it on a regular basis at least. The thing is, he has a bunch of (usually) deliciously weird ideas - ALL TOGETHER - so he starts spinning a story and it kinds of fagocitates a few of them, often becoming a supernatural/paranormal/thriller/sci-fi/horror monster. I'm not saying it always works (for my part, I wish he would have never written the Chain Letter duology and Monster), but sure it makes for something different and outrageous. I love the feeling :D. And maybe you will, too...

If I managed to get you interested in Christopher Pike's books, a good place to start would be...this page of my blog (shameless advertising, I know. LOL). It's a comprehensive list of all his novels, with links to my reviews where available. Have a nice stay!


Thank you Veronika and Ruzaika for having me! and for putting this awesome - and fearsome - event together ;).

Roberta R. is a senior blogger with a penchant for YA books. Her love of music has landed her a job as a host for a local radio station. Her fancy for TV series, from police procedural to sci-fi to urban fantasy, causes her to experiment wild adventures with too many fictional characters in her night dreams. Her urge to spread the love for overlooked YA novels drove her to start her blog, Offbeat YA, in 2012.
Find her on:
Blog     Twitter     Goodreads

Offbeat YA features refreshing books you don’t often see reviewed. Its aim is to give a spotlight to some less heeded, but often worthy novels – new and, well, newish. (Or even a little older, who cares?). Offbeat YA is the place for Afterlife, Supernatural, Sci-Fi, Multiverse, Thriller, Contemporary, and occasionally Adult Lit. (as long as it’s weird enough!) – with a whole section devoted to Mr. Christopher Pike!