Faye Bird - What I Couldn't Tell You 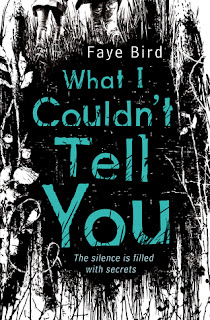 When love turns to jealousy, when jealousy turns to rage, when rage turns to destruction...

Laura was head over heels in love with Joe. But now Laura lies in a coma and Joe has gone missing. Was he the one who attacked her?

Laura's sister Tessie is selectively mute. She can't talk but she can listen. And as people tell her their secrets, she thinks she's getting close to understanding what happened on that fateful night.

Received a review copy in exchange for an honest review by Usborne Publishing.

The first thing that snagged my attention about this book is the mention of Selective Mutism. I've never read a book that dealt with a protagonist suffering from SM, so I knew I just had to check this out. Also, the synopsis just sounds SO good- I do so love a mystery thriller, not to mention that lovely, albeit slightly foreboding cover, that I knew I couldn't pass this. So, did What I Couldn't Tell You fulfill my expectations? Has the author managed to weave an engaging thriller around a selectively mute main character? Read on to find out what worked for me and what didn't in this YA contemporary thriller.

The story is narrated in the point of view of Tessie, whose sister Laura, who was crazily in love with Joe now lies in a coma. Joe is nowhere to be seen, and as days pass by, Tessie begins to learn more and more about Laura and Joe...but here's the catch- she's selectively mute, which of course means that she can't talk to anyone about this. She could have, at certain instances, but due to inner turmoils of her own which are very well-portrayed in the book, Tessie is unable to divulge anything she learns to anyone.

Tessie was a very interesting MC, and she definitely contributed a lot towards the intrigue of the story. However, if you fail to gel with Tessie at the beginning, you're sure to find yourself in quite a spot trying to get into the story because it's...frustrating. It's frustrating being Tessie, and it's frustrating being in her head. Imagine having a million things to say and being unable to say them? Yeah, that's pretty much the problem Tessie has. She can't talk or express herself in ways like writing, or even texting at times, when she's not home with the front door PROPERLY SHUT, or in any of her safe places. So when things start getting complicated, you'd no doubt find yourself losing patience with Tessie. I could put myself in Tessie's shoes very easily and therefore however frustrating it felt, I could get it.

There were many other characters who each contributed a lot towards the story. While most of them rubbed me the wrong way, the one I was wary of the most was Bill. He was creepy, and I didn't take to him right from the word go. Tessie's best friend Max was a blessing- he dd make some stupid decisions, but he always tried to be there for her, and whatever transpired between them in the course of the story, I'm really glad she had someone like him in her life. Tessie's father and brother Jake were brilliant characters too- they both tried their best to understand her and that in itself was a great thing.

In retrospection, relationship portrayal is the one thing in this book that I'm in two minds about. The relationship between Tessie and her mom was very realistically portrayed, and the author more than did justice in depicting the strained relationship between a depressed mother and her selectively mute daughter. However, while the familial relationships were all done well, the romantic ones were sadly not quite up to the mark. Laura and Joe were very much in love but I couldn't help feeling Laura was being very stupid, and Joe didn't help things either.

I'd rather not go into the love triangle much, but it could have been handled better too. Max didn't deserve to be treated that way, Bill was a creepy stalker, and Tessie was being very irresponsible. While I do understand why she acted the way she did and it was more than justified in the course of the story, I'm afraid about the  kind of impression this would give to younger readers.

What I Couldn't Tell You is a terribly underrated, important book that successfully portrays the struggle of going through life with Selective Mutism and it works very well as a riveting YA mystery thriller too. Should you give this a go? Well, if you don't mind or can overlook the problems I mentioned above and if you are interested in reading a book in the POV of a selectively mute protagonist, I'm sure you'd end up loving this book too! So, yes. Pick this up already, won't you?